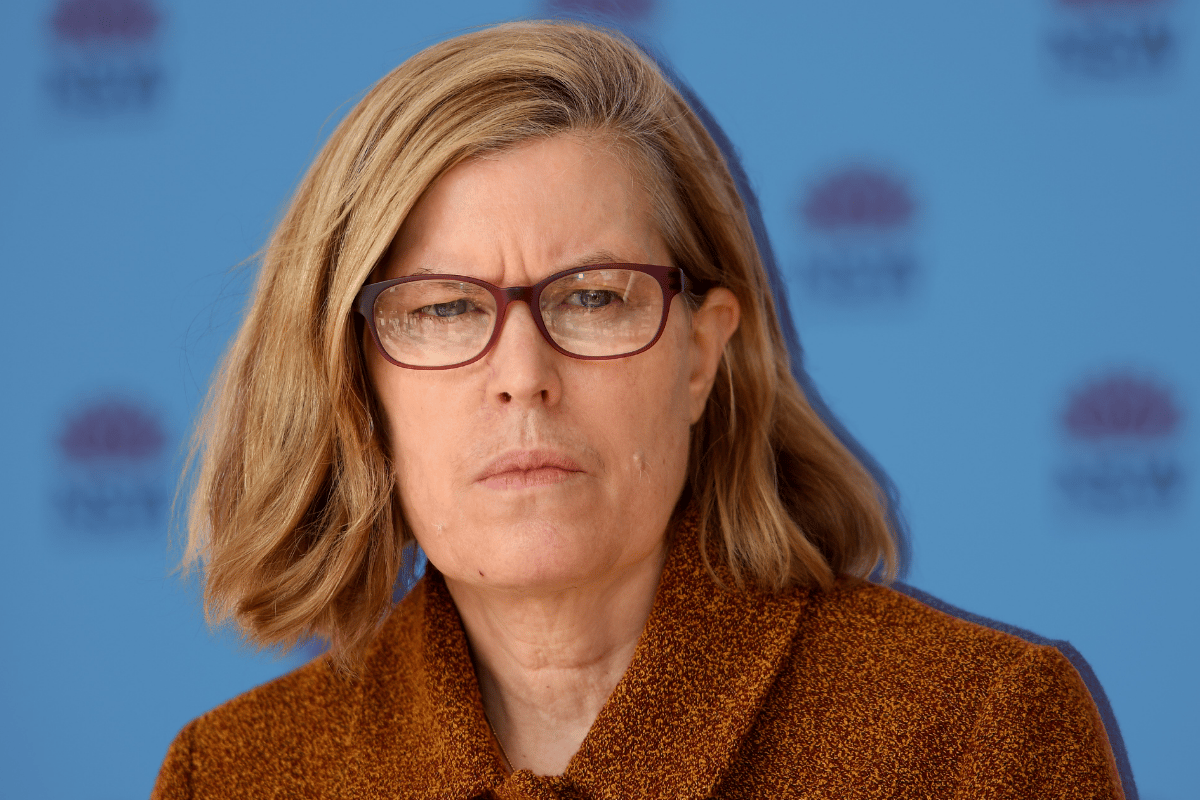 With her notes in hand, the NSW Chief Health Officer has fronted reporters on an almost daily basis alongside Premier Gladys Berejiklian during the state's 11am COVID-19 press conferences.

Even before the recent Delta outbreak, Chant was at the helm providing health advice to steer our state through the pandemic. And this time around, she's proven she won't let things like broken glasses get in her way.

This says it all - Kerry Chant soldiering on even with broken glasses! pic.twitter.com/VJlfv30bvY

As one former NSW government official told The Saturday Paper, "It was Shane Fitzsimmons [former Rural Fire Service commissioner] during the bushfires, and [state emergency operations controller] Mick Fuller during the early pandemic. Now it is Kerry Chant. And Kerry Chant has a status all her own."

But while she's the face of NSW's public health response to the pandemic, there's little we know about Chant's life behind the scenes.

So we decided to find out more about the woman on the frontline, including her career beginnings and family life.

Growing up in Punchbowl.

Chant grew up in Punchbowl in Sydney's south west.

In a press conference in early August thanking south-west Sydney communities, Chant proudly declared: “I grew up in Punchbowl and had the privilege of working in south-western Sydney.”

While she's always been interested in health and science, she didn't always know what she wanted to be when she grew up.

"I actually didn’t know what I wanted to be," she told The Australian.

"And I think that’s probably okay to say that, because I think many young people struggle with knowing what they want to be."

Growing up, Chant worked in a number of retail jobs before eventually deciding to study medicine.

"I had many part-time jobs, including at Mr Whippy at Roselands. I worked for Grace Bros in the furniture department, then I worked in a pharmacy... I think it actually helped me a lot when I did medicine," she told the publication.

She later graduated from the University of NSW before completing her Masters in Health Administration and Public Health.

Becoming the face of NSW's public health response to the pandemic.

Today we know Chant as the Chief Health Officer of NSW. It's a role she's held since 2008.

Before that, she worked as the Director of Health Protection and Deputy NSW Chief Health Officer.

She also played an instrumental role in creating the state’s HIV strategy in 2012, which focussed on testing and detecting new infections early.

These days she's Premier Gladys Berejiklian's right-hand woman and starts the day off with a morning meeting at the NSW Health headquarters in St Leonards. According to The Guardian, she often attends an emergency cabinet meeting followed by more briefings.

By the time 11am rolls around, she's on our screens announcing the latest case numbers and answering questions from reporters.

It's a responsibility that comes with a lot of public pressure. And that's certainly not lost on her.

"I think the gravity of the situation is clear. I’m very thoughtful and bear the weight of any decisions or ­advice I provide, but there’s been a very strong team behind me," Chant told The Australian last year.

"One of the key things about COVID is we’ve had to learn so quickly. We’ve had to learn and pick up ­information from the northern hemisphere, learn ­ourselves and generate that evidence. And being very open to new thinking has been a key component of the response." Dr Kerry Chant at a press conference in June . Image: Getty. When asked how she copes with all that weight on her shoulders, Chant told The Sydney Morning Herald, she likes to take some time out and "have a cup of tea".

Earlier this year, she was named the state's Woman of the Year in March 2021 for the role she's played in providing public health advice throughout the pandemic.

"Dr Chant is a role model, especially for women, and has absolutely excelled in her chosen field to affect lasting change," Berejiklian said in a statement at the time.

Congratulations to @NSWCHO, Dr Kerry Chant, winner of the Premier’s Award for NSW Woman of the Year 2021! #WOTY2021 pic.twitter.com/ItSJKF8z22

Throughout her career, Chant has understandably kept her family life out of the public eye.

However, we do know that she is married and has three adult children, who she presumably hasn't spent a lot of time with over the past couple of months.

Last month, Chant mentioned her husband in a press conference as she urged the public to get the AstraZeneca vaccine.

"So I just want to say that the Chief Health Officer would not recommend AstraZeneca to someone that they care about if they had concerns that the risks of AstraZeneca are infinitesimally small compared to the benefits."

With the entire state of NSW now in lockdown, we can expect to hear more from Dr Kerry Chant as she continues to lead the state through the pandemic.

Reply
Upvote
LOL Is throwing people under the bus the latest trend for Premiers?
Dan Andrews from Victoria did the same with his Health Minister Jenny Mikakos who was forced to resign.
M
mamamia-user-482898552 6 months ago