Kate Winslet has graced our screens for over 25 years, earning herself four Golden Globe Awards, seven Oscar nominations, and an Oscar for Best Actress.

But behind the scenes, the 45-year-old Titanic actress has had a tumultuous love life.

Between 1998 and 2013, Winslet went on to marry and have children with three different men – Jim Threapleton, Sam Mendes and Edward Abel Smith (aka Ned Rocknroll).

Watch: The Mamamia team when we knew it was time for a divorce. Post continues below.

Throughout her career, Winslet, who stars in the new series Mare of Easttown, has tried to keep her relationships and children out of the spotlight.

That said, she has shared a few things about her three marriages over the years.

Here’s a look at the actress’ relationship history.

Winslet quickly became a household name after starring in 1997 cult-classic Titanic. But while her career was in the midst of taking off, she surprisingly turned down the lead role in Shakespeare in Love – a role which later won Gwyneth Paltrow the Oscar for Best Actress – to appear in indie film Hideous Kinky.

But even though she missed out on a potential Academy Award, her role in Hideous Kinky gave her the chance to meet her first husband, filmmaker Jim Threapleton.

Just a year after meeting on set, the couple tied the knot in November 1998 when Winslet was just 23 years old.

Now 20 years old, Mia has followed in her mother's footsteps and taken up acting.

Speaking on British breakfast show Lorraine, Winslet said she "always suspected" her daughter would take up the craft.

"A couple of years ago she turned around and said, 'I think I would like to give it a go'."

Having a different last name as her mum has also allowed Mia to work in the industry relatively undetected and land roles on her own.

"What's great for her is she has a different surname so she slipped under the radar and the people who cast her didn't know she was my daughter," she said.

"That was important for her self-esteem of course."

Mia recently appeared in the 2020 film Shadows, and according to her mum, she is currently working on a television series in the Czech Republic.

"Shadows was the first film I’d received an audition for, and the first script I had ever been given to read," Mia told Variety last year.

"I couldn’t believe my luck. I read it and didn’t put it down. Which is admitting a lot because I’m dyslexic and that means I have to read slowly and steadily to be able to absorb things fully sometimes."

"I really understand why my mum has always impressed on us how hard the work is. She is right! And I loved every second of it." 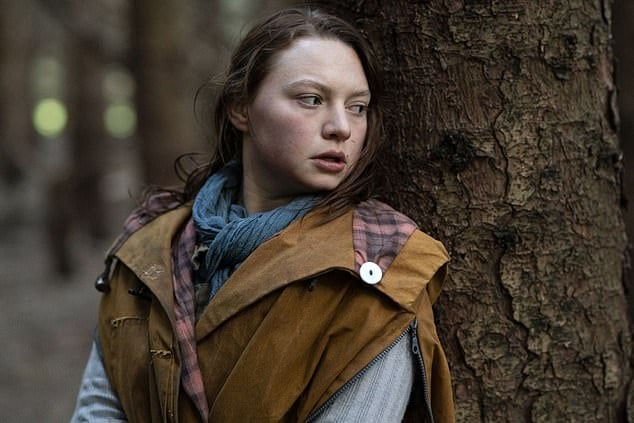 Unfortunately, as is the way for many young Hollywood couples, Mia's parent's relationship didn't last long.

At just 26 years old, Winslet's first marriage came to an end when the pair divorced in December 2001.

According to the actress, the couple didn't exactly have the best marriage.

"My relationship with Mia’s dad was a mess. In the last year and a half of our marriage, I became a completely different person. I was isolated from my family and my friends," she told Index Magazine in 2004.

"I started looking for supporting roles, because Jim didn’t want me to be famous. He would read a script that I loved and immediately kill my passion for it by saying it wasn’t good enough for me. That was the only time in my life that I’ve ever lost control of my instincts."

Months after her divorce, the actress went on to date Hollywood director Sam Mendes in 2001 after he approached her about a role in a play he was directing. She eventually turned down the role, and the pair began dating instead.

Two years later, while on a holiday in Anguilla, the couple spontaneously decided to get married.

"We hadn't been planning to do it," Winslet previously told The Guardian. "But we thought it was rather a good idea, so we just did it."

Unfortunately, their new relationship caused quite the media controversy, and Winslet was accused of previously having an affair with Mendes.

"It was really hard when Mia’s dad and I split up. I met Sam about four or five months afterward, and of course the press blamed our divorce on that, saying that Sam and I had had an affair. Obviously we didn’t, but the tabloids claimed that I was swanning around, going to premieres left and right, and that I didn’t even live with my daughter," she told Index Magazine.

In December 2003, Winslet and Mendes welcomed their son, Joe Mendes, who is now 17 years old.

The pair later went on to work together in 2008 film, Revolutionary Road, alongside actor Leonardo DiCaprio.

In early 2010, however, the couple decided to call it quits. The second time around, Winslet says her divorce was anything but easy.

"I know lots of people who are not in the public eye who have gone through several marriages, I really do, and it’s just those are the cards that life dealt me. I didn’t plan on its being that way," she told the Wall Street Journal in 2015.

After the divorce, Winslet took her two kids on holidays to Sir Richard Branson’s private Caribbean island, Necker Island in 2011.

While staying on the island, tragedy struck when lightning from a tropic storm hit their home and started a fire. Twenty people escaped the blaze and she helped carry Sir Branson’s 90-year-old mother to safety.

On the bright side, the event led her to meet Branson’s nephew, Edward Abel Smith (who had legally changed his name to Ned Rocknroll back in 2008), who was also staying on Necker Island at the time.

"I met my husband in a house fire," she told ET.

"He was the only dude to have a head torch and a pair of shoes, everyone else left everything behind. I took a bra and passports and my children."

And so she did. In 2012, she tied the knot with Ned Rocknroll in an intimate New York ceremony which reportedly included just 12 guests and Winslet’s two children.

Looking back, the 44-year-old actress said she never expected to walk down the aisle three times.

"I never imagined I would be married for the third time at the age of 37, and it’s easy for other people to judge, and for me to question my own sense of judgement, but I feel incredibly lucky," she told Harper’s Bazaar in 2013.

In 2013, the couple welcomed their son Bear Winslet (now seven and have been married ever since.

"Thank God for Ned – really," she told the Wall Street Journal. "He’s just so incredibly supportive, and he’s so much fun. He’s absolutely everything to me. And to all of us."

Ned Rocknroll later changed his name back to Edward Abel Smith in 2019 in the interest of his family, according to The Sun.

"It was always a bit of a joke. He is a very happy-go-lucky person," a source supposedly told the publication.

"He decided to change it back to Smith because he is now a dad and wants to set an example. Kate also felt it might be embarrassing for their child as he got older."

And we're sure Winslet was glad he did.

msd a year ago

Reply
Upvote
1 upvotes
Kate Winslet is nice, funny, talented and gorgeous.  She seems to have got it right with mr rock-n-roll/Smith.  Good luck to them and their blended family.  So what if she has  3 different fathers for her kids?  I only have one but I could have more if some of my previous roots made a baby!