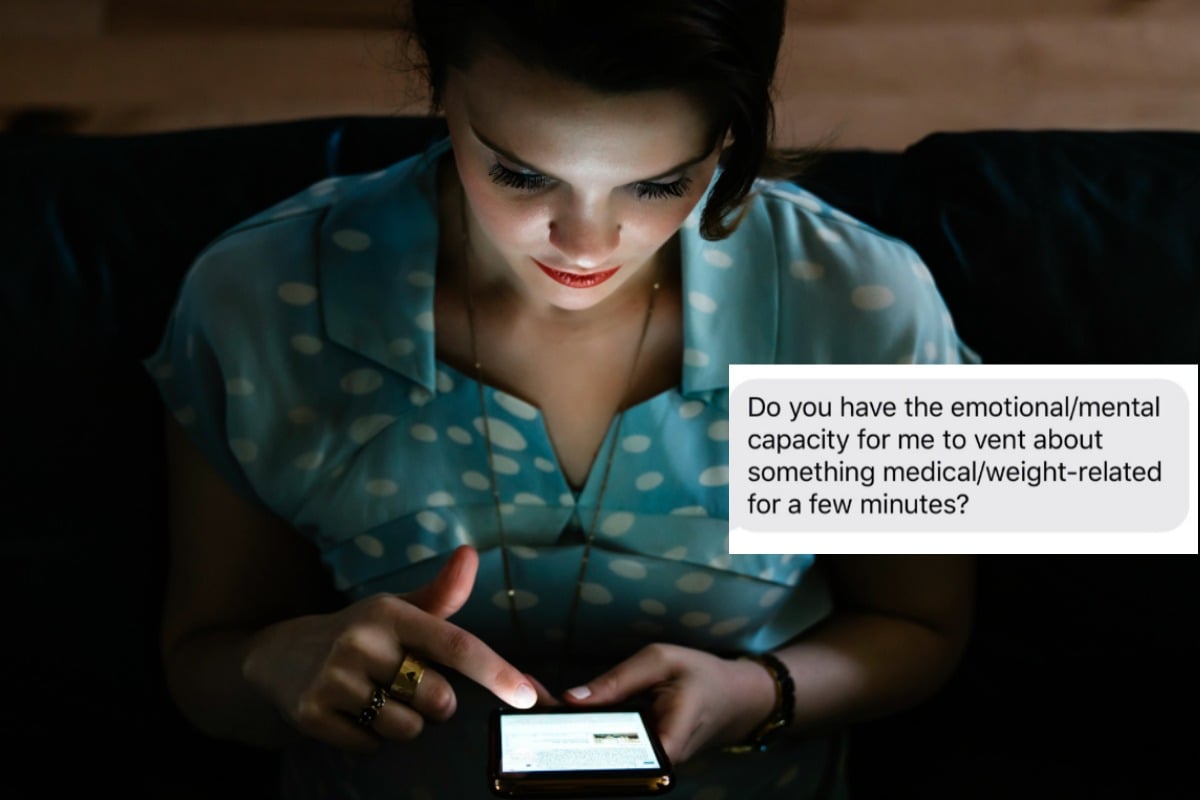 Earlier this month, an academic and writer named Melissa A. Fabello shared a text she received from a friend on Twitter.

The message read: “Do you have the emotional/mental capacity for me to vent about something medical/weight-related for a few minutes?”

I want to chat briefly about this text that I received from a friend last week: pic.twitter.com/cfwYx3tJQB

Why does it look like this person manually selected from a number of possible subjects to vent about and ultimately went with ‘medical/weight-related’? Is that a specific category?

And who asks their friends if they have the “emotional and/or mental capacity” to deal with their sh*t right now?

Work wives just… assume you have capacity. Post continues below.

“…Here’s why that text was really, really important,” Fabello explained to her followers who were divided over the message.

“(1) It acknowledges that I have limited time & emotional availability.

“(2) It asks permission to vent, rather than unloading without warning.

“(3) It notes the content of the conversation, which could be triggering for me.”

She continued, “I’m the kind of person who people reach out to when they’re in pain. Because I’m good at emotional processing AND logical problem-solving, I tend to be a go-to for my friends who need to externally process their experience,” which begs the question why her friend felt the need to send her that message in the first place but I digress.

“Asking for consent for emotional labor, even from people with whom you have a long-standing relationship that is welcoming to crisis-averting, should be common practice,” she argued, and many of her followers agreed.

Nothing against Fabello, but the underlying question, really, is whether or not we consider all human interactions to be some form of ‘work’ or ‘labour’. Fabello clearly does, which is why she understands friendships to ultimately drain our finite stores of ‘capacity’.

If you don’t believe all human interactions are ‘work’, then this looks a lot like, as one guy on Twitter put it, “commodifying compassion”.

Fabello, who specialises in feminism and human sexuality studies, then provided her followers with what is essentially a template for an Out Of Office response. But for friendships.

“Hey! I’m so glad you reached out,” she began, before constructing a message that indicated that she was not at all glad that anyone reached out.

“I’m actually at capacity/helping someone else who’s in crisis/dealing with some personal stuff right now, and I don’t think I can hold appropriate space for you. Could we connect [later date or time] instead/Do you have someone else you could reach out to?”

PS: Someone reached out and asked for an example of how you can respond to someone if you don’t have the space to support them.

I offered this template: pic.twitter.com/lCzDl60Igy

Fabello was inundated with thousands of responses, and women appeared to fall into two distinct camps.

One group saw her message as “cold” suggesting that she “[doesn’t] seem like a very good friend tbh”.

But the second camp appreciated the acknowledgement that friendships are a form of emotional labour.

“It is emotionally taxing to be expected to hold everyone’s burden at all times,” one tweet read. “Especially when you’ve enough on your plate. Thank you for this.”

Another highlighted how important scripts and templates like this are for people living with autism or social anxiety.

We discuss the mental load on Mamamia Out Loud, our twice weekly podcast with what women are talking about. Post continues below.

But while many agreed that it’s important to be respectful of people’s time and emotions, most worried that those with mental illness often feel like a “burden” anyway, and this message might not help.

Since the tweet was posted a few weeks ago, the words “I’m at capacity” have gone viral, with tweets popping up all over the place.

me: will it be alright?

traffic lights: Hey! I’m so glad you reached out. I’m actually at capacity / helping someone else who’s in crisis / dealing with some personal stuff right now, and I don’t think I can hold appropriate space for you.

BOSS: I know it’s your day off but I need you to cover a shift

ME: Hey! I’m so glad you reached out! I’m actually at capacity right now and I don’t think I can hold appropriate space for you. Could we connect [later date] instead? Do you have someone else you can reach out to?

me, calling 911: please help ive been in an accident

911 operator: hey I’m so glad I u reached the it. i’m actually at capacity/helping someone else who is in crisis/dealing with some personal stuff right now, and I don’t think I can hold appropriate space for you

landlord: just a reminder your rent was due last week

me: hey! i’m so glad you reached out. i’m actually at capacity / helping someone else who’s in crisis / dealing with some personal stuff right now, and don’t think i can hold appropriate space for you. could we connect [later

Professor: do u have the essay that was due last week

me: Hey! Im so glad you reached out. I’m actually at capacity / helping someone who’s in crisis / dealing with some personal stuff right now, and I don’t think I can hold appropriate space for you. Could we connect [later dat

what the fuck man I hate group projects pic.twitter.com/BifPjg5N3C

Whether you agree with what Fabello said or not, you’ve got to admit, the tweets are pretty funny.

If you think this is ridiculous you clearly have never suffered mental health issues. Lucky you. The first thing you learn is in therapy is to put you own oxygen mask on before you try to help anyone else. These messages are two self aware people communicating about their limits, is that shameworthy now? Didn’t we all want more focus on mental health and suicide prevention?

Friendships are effort, work. Not all work is begrudging. Friendship is a labour of love, that is usually rewarded- a mutual effort. That doesn't mean we all can be there 100%, all of the time. The template message sounds very formal, but the intention is not bad.