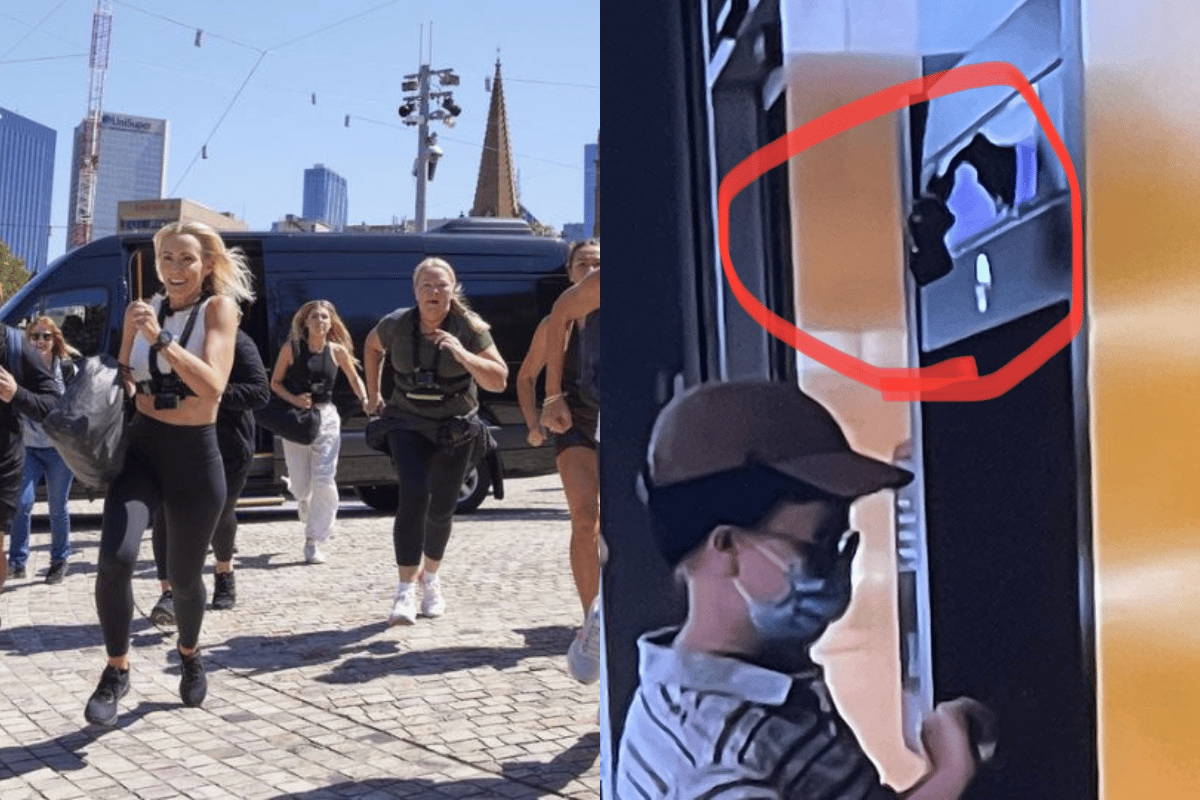 Hunted is the new reality competition series that has turned our evening couch sessions into a pretty tense time.

Already, Australian viewer numbers have exploded after launching late last month, and it has managed to keep audiences coming back episode after episode.

ICYMI, Hunted is a reality TV competition that requires 18 'fugitives', who compete in pairs, to evade being captured by a team of detectives and intelligence experts. The team of experts are either at Central HQ or on the ground, literally running after the contestants. The fugitive's goal is to move quickly to throw the hunters off their scent and survive 21 days without being caught.

Watch the trailer for Hunted on Network 10. Post continues after video.

The fugitives can run anywhere in Victoria and how they stay hidden is entirely up to them. Some choose to go bush and camp out, others utilise a network of 'associates' to get them far away, fast.

After 21 days, whoever has managed to avoid being found will get a share of the $100,000 prize money.

The show is absolutely wild, and because of that the Aussies watching along at home have many, many questions. Because in all honesty, Hunters is just a little bit suss.

So we've done some investigating, and here is everything we know about the reality TV show.

How are the experts able to hack into the contestant's phones?

Understandably, fans of the show have been curious as to how exactly producers are able to get into fugitives' phones.

TV Tonight spoke to Deputy Intelligence Ben Owens to find out how this is possible, who said their objective is to "stimulate" a real-world experience and make it as intense as possible for the contestants.

"I’m not sure I’m allowed to say how far back we have access to, but certainly when the fugitives sign up for the show, again, we want to simulate it. In the real world, of course, law enforcement could be looking at your banking history. Who do you pay direct debits to? Who’s your phone provider? Is there another person you pay money to and could that be a close associate?

What techniques do producers employ to get good footage of contestants?

Many viewers at home are curious as to how such high-quality footage of fugitives is able to be obtained. In a recent article by the Sydney Morning Herald, it was revealed camera operators trailing each contestant play a large role in sorting that out.

"Because the producers don’t have authority to actually request that footage, it is reproduced on the run by having the camera operator place a Go-Pro where the closed-circuit camera would be, using a selfie stick. That footage is then uploaded via WhatsApp, and is available to the team at HQ within minutes," the SMH reported.

How do the hunters get access to CCTV from public transport, banks and private enterprise?

If you've seen Hunted, then you might already be aware that special footage is somehow able to be maintained from public transport, banks and private business cameras.

Well according to Owens, it's not that hard to get... but not exactly a simple or 'easy' process either.

"I’m not sure I can give you the exact mechanics of how it works from the ground back into production," Owens told TV Tonight. "But what I can say is it’s simulating, replicating real life. Inasmuch as, if our fugitive gets on a train, we as hunters have to confirm that there is CCTV on the train before we request it. If we don’t request it, we don’t get it.

“As it explains on episode one, there is a covert camera operator with the fugitives... from that footage, we are able to access it, but only if we’re in the right place, at the right time, with the right time parameters and confirm there are cameras there. Only then will we get that information. So once again, it’s completely fair as to how they simulate it.

Owens added: "Obviously we can’t get access to real live CCTV and stuff… but I just want to stress again, we’re not given it free."

#HuntedAU
Personally I wouldn’t go to an ATM that has a camera stuck to it. pic.twitter.com/7Fh4ScGLvO

How exactly does Hunted make money considering it's so... unpredictable?

If you have any interest as to how Hunted is able to have any commercial support at all – considering how unpredictable and bizarre the show is – then you might want to keep reading.

According to Media Week, who spoke with partnership direct effect, Tamar Hovagimian, those involved have to tread carefully so as not to mess with the fugitive's game.

"We don’t know what products our fugitives will use to escape a situation, we don’t know what they will eat, wear or talk about," Hovagimian explained. "Our commercial opportunities are similar to other shows but the strongest opportunities with Hunted are the creative ways brands can align to the content around the show."

Hovagimian added that they're able to secure opportunities with banking, food delivery, vitamin and fitness brands.

How is Hunted is able to "replicate" real life?

Director of content at Endemol Shine Australia, Marty Benson, told Media Week that those behind the scenes go to incredible efforts to ensure the game is made fair and realistic.

“For every fugitive and embedded producer or director, there’s also a forward team and the forward team is getting all the CCTV footage as we go," Benson explained. "They are also sending back all the data and information from the fugitive’s actions, for example, that they just got into a white car, it is a Toyota, and the rego is such and such."

Benson added each team has access to a "data wrangler" which is able to compile every single move a fugitive makes.

"When the hunters request information such as CCTV footage, then that will be with that specific data wrangler. It is a really complicated process but within two minutes of somebody taking money out of an ATM machine, for example, we have replicated the CCTV footage and then sent it off via WhatsApp and then the hunters can request this information after getting a ping on the person’s card," Benson said.

Not only this but to make the game as even as possible, production teams are kept entirely separate.

“It is like having two productions at once, and you have to be on top of both of them at the very same time," Benson said. "We actually separated the production office for the fugitives from the HQ site. Anyone that worked on the hunter side had no comms with anyone that worked on the fugitive side. They have no idea who these people were, and they had no idea what their emails were, or what information was coming or going."

Are the Hunters actually good at what they do?

Well, according to Benson, they are.

"The hunters want to catch the fugitives, I believe more than the fugitives want to make it to the end. The hunters have their reputations at stake," Benson explained. "They are legitimate and credible investigators, cyber experts, police, army, and British Intelligence. The only thing that gave me hope that we would last the amount of time was that nowhere in the world do you see a crack team of detectives chasing down 18 fugitives all at once.

"I was told by David Craig, the chief, that normally you have a team of about 100-150, chasing one fugitive. They started catching people relatively quickly as you’ll see from the first episode.”