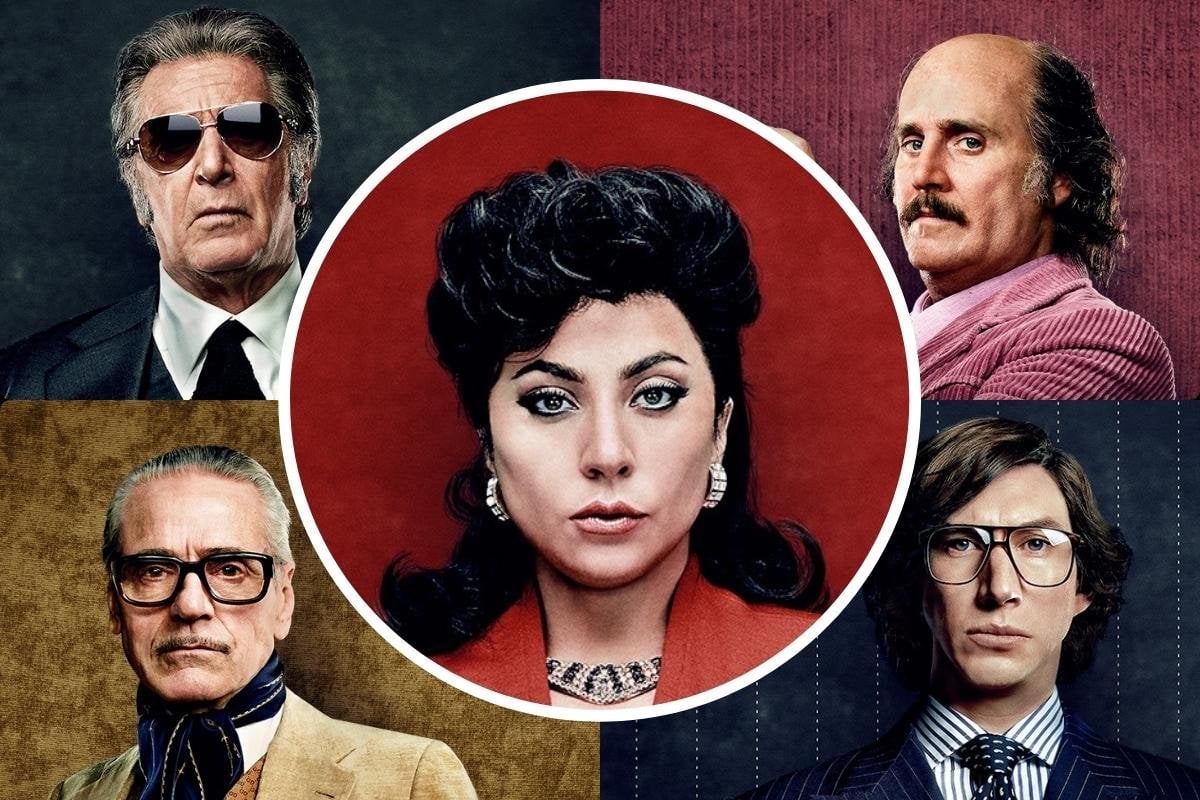 "Gucci: it was a name that sounded so sweet, so seductive. They had it all: wealth, style, power... Who wouldn't kill for that?"

So says Lady Gaga's character in the trailer for her upcoming film House of Gucci, a darkly glamorous feature about the family behind one of the world's most famous fashion houses.

The film, directed by Ridley Scott, recently enjoyed its US premiere, with worldwide release to follow over the coming months.

But audiences are already well-primed courtesy of months of drip-fed details, from the Oscar-baiting cast to original vintage fashion (think Adam Driver in a somehow luxurious looking cable-knit turtleneck).

Here are five things we know so far about House of Gucci.

It's based on a true story.

House of Gucci is based on a book of the same name by Sara Gay Forden, which captured the extraordinary true events that culminated in the 1995 murder of Maurizio Gucci, the grandson of the dynastic fashion house's founder, Guccio.

Yet at the centre of this tragic family drama was an outsider.

Painted as an Elizabeth Taylor figure in the press, Patrizia relished in her luxury lifestyle and her status as one half of a bonafide Italian power couple.

She developed a reputation for gaudy jewellery, extravagant Caribbean holidays, and excessive spending (rumour has it she forked out thousands of dollars each month for orchids alone).

She has also been credited with the infamous line, "It's better to cry in a Rolls-Royce than be happy on a bicycle."

When the pair split, it was predictably dramatic. Infidelity, trash-talking and death threats brought yet more scandal to a family already plagued by decades of infighting.

Then came the assassination.

On March 27, 1995, 46-year-old Maurizio was gunned down on the steps of his Milan office as he arrived for work. Five people were ultimately implicated in the murder, including Patrizia, her supposedly clairvoyant friend, and a hired gun.

All received prison time, ranging from 25 years for the psychic to life for the hitman. Patrizia was handed 26 years but walked free in 2016, some 11 years early. (According to Italian press, she could have been released in 2011, but declined because employment was listed as a condition of her parole: "I've never worked in my life and I don’t intend to start now.")

Asked upon her eventual release why she didn't handle the assassination herself, the so-dubbed Vedova Nera (Italian for 'Black Widow') told The Guardian, simply, "My eyesight is not so good. I didn't want to miss."

The cast is stacked like the front row at the Oscars.

We're used to seeing Lady Gaga in elaborate wigs and designer clothes. Throw in an Italian accent, an 80s aesthetic, and a pack-a-day habit, and you've got yourself Patrizia Reggiani.

Starring alongside her are five fellow Academy Award winners and nominees.

A bodysuit and prosthetic-clad Jared Leto (Dallas Buyer's Club) as his cousin, Paolo.

And screen legend Al Pacino (Scent of a Woman) as his uncle and Gucci family patriarch, Aldo.

The Gucci family is apparently furiosa about the film.

One of Maurizio’s second cousins, Patrizia Gucci (not to be confused with his murderous ex-wife), has spoken on behalf of the family to express their concern about its portrayal in the film.

According to the Associated Press, "Their concerns stem from the casting of top actors to play family members whose stories intersect little with Maurizio Gucci’s murder, the lack of current contact with [Ridley] Scott’s production company, and inaccuracies they see in the book on which the film is based."

Patrizia told the agency that they were yet to see the film but, based on photos of the cast, the family isn't optimistic.

"My grandfather [Aldo] was a very handsome man, like all the Guccis, and very tall, blue eyes and very elegant," she said.

"He is being played by Al Pacino, who is not very tall already, and [on-set photos] shows him as fat, short, with sideburns, really ugly. Shameful, because he doesn’t resemble him at all."

The last time Lady Gaga appeared in a feature film (2018's A Star is Born) she earned herself an Academy Award nomination, and there's widespread speculation that she could repeat the feat with House of Gucci.

While full reviews won't be released until late November, critics have been permitted to post their initial reactions to social media, and the praise of Gaga's performance seems almost universal.

.@HouseOfGucciMov  is absolutely divine. It is murderously delicious. The cast delivers the best performances of the year. Luxuriate with Adam Driver and Lady Gaga whose chemistry and performances are phenomenal. The film is a masterclass in acting. pic.twitter.com/PGmiZ1q05J

House of Gucci = juicy caviar camp, an absurdly enjoyable Italian soap opera where Bald Jared Leto pisses on a Gucci scarf. It ultimately eases on its gas to a fault, but Lady Gaga's earnest, ferocious performance completes her evolution from movie star to mighty dramatic actréss

Much has been made about the fact that she began working on her Italian accent six months prior to filming, then maintained throughout the three-month shoot.

Gaga has expressed her surprise at the interest in her commitment to the role.

"If I had a jazz show next week, if I don’t rehearse ahead of time, my voice is not ready for the show. My approach to [the accent] was not different from my commitment to music," she told The New York Times. "But I want to be clear: I don’t think it’s about sensationalising method acting or being in character as the only way to do things. It would have been harder for me to go in and out of character on set than to stay in it."

Her co-star, Salma Hayek, is among those praising Gaga's performance.

"She is incredibly talented, incredibly smart. And she has on top of all that, extra abilities that not every brilliant actor has, which is she’s good with the accent," she told Variety. "She is extraordinary at improvising, and not everybody has that. She really embodies the character. Her level of commitment — I’ve only seen maybe once or twice somebody commit to a character like she does. And she’s also a great team player."

It's arriving late to Australia.

House of Gucci will screen in the US from November 24, but Australia viewers will have to wait until January 1.

That's likely due to distributors wanting to hold out for eased COVID-19 restrictions, and therefore maximising the audience in our largest cities.