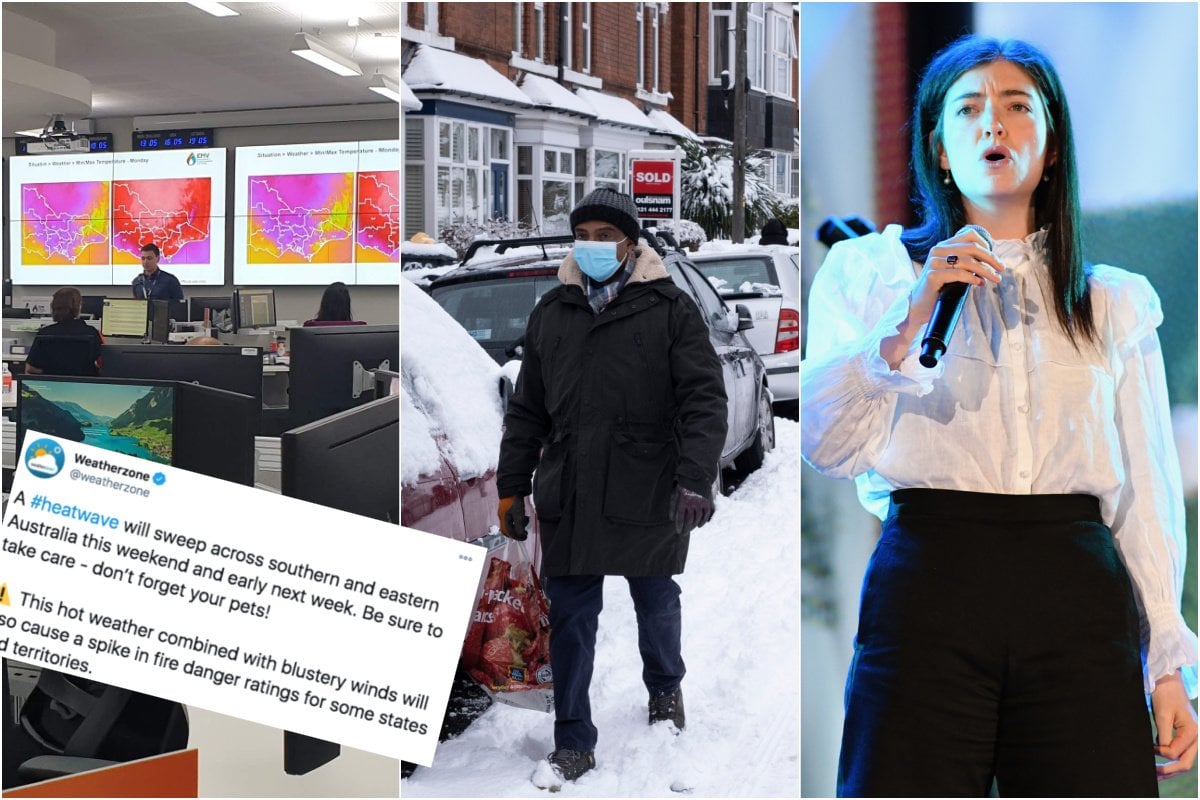 Much of the east coast waking up from 'oppressive' night amid heatwave.

Residents across Australia's southeast are enduring a sleepless night as a summer heatwave settles in for much of South Australia, NSW and Victoria.

Extreme heat hit South Australia - including Adelaide - along with regional NSW and Victoria on Sunday, with temperatures in some regions climbing into the mid-40s.

In NSW, the mercury soared to 40C in Sydney's west and 43.8C at Hay in the state's western Riverina region.

Residents across Australia’s southeast have endured a sleepless night as a summer heatwave settles in for much of South Australia, NSW and Victoria. https://t.co/DZMkCUSq7B

There was expected to be little relief across affected areas into Monday morning, with forecast overnight minimums hovering in the high 20s and even pushing 30C at Mildura in Victoria's northwest.

Adelaide and Melbourne were headed for forecast lows of 27C, with Sydney tipped to fare slightly better with 21C.

Victoria, Tasmania, and western and southern parts of NSW are likely to see their hottest temperatures of the heatwave on Monday, while the mercury is due to peak on Tuesday for eastern NSW and Greater Sydney.

Emergency services in Melbourne are bracing for the highest fire-risk day of this season so far as temperatures creep into the 40s.

The State Control Centre is up and running for the day, ready to respond to today and tomorrows forecast hot weather across the state. pic.twitter.com/TDsGJFxTy9

The record executive who managed pop singer Lorde for five years has been fired from his Australian record label after revelations of sexual harassment.

Scott Maclachlan is widely credited with discovering the Grammy-winning singer and managing her at his Saiko Management until 2016.

He managed Lorde from through the release of her debut album but later parted ways with her and took up a role as a senior vice president at Warner Music Group's Australian arm in Sydney.

The news was first reported by the New Zealand publication Stuff, and Machlachlan admitted to the "harmful impact" of his behaviour.

"I do accept the harmful impact of my past behaviour and I try every day to repair the damage and prevent it happening again," Maclachlan told Stuff.

Warner Music Group said it previously investigated what they believed to be an isolated incident in 2018.

NSW has recorded a full week without new locally-acquired COVID-19 cases as interstate travel restrictions on the state's residents begin to ease.

NSW Health said in a statement on Sunday that there were zero new local COVID-19 cases in the 24 hours to 8pm on Saturday, but the department reiterated that testing rates remain too low.

Police will be cracking down on any large public or private gatherings over the long weekend, as NSW recorded no new locally acquired cases of COVID-19 for the seventh straight day on Sunday | @pallavisinghal_ https://t.co/wUq4nWbFnz

"High testing rates are necessary to give confidence that no cases are going undetected in the community," Dr Christine Selvey said.

Victoria's border has reopened to almost all of Sydney, barring the Cumberland local government area.

Victoria has now enjoyed its 18th straight day without reporting a new community infection, despite an outbreak in hotel quarantine amongst players and officials linked to the Australian Open.

England is still a "long, long, long way" from being able to lift coronavirus restrictions, the UK's health spokesman says, despite millions of people having already been vaccinated.

Health Secretary Matt Hancock says there's evidence that restrictions were having an impact and that the vaccination programme was making "brilliant progress".

Three quarters of all those over 80 in the UK have now been vaccinated, with a similar number of those in care homes.

England’s lockdown will not ease until March, says Raab https://t.co/Nn7YqqQ0Lp

But Hancock says case numbers were "incredibly high" and the health system remains under intense pressure.

The Health Secretary said he had a "high degree of confidence" that lockdown restrictions would eventually be lifted in time for the summer.

"I hope we have a great British summer. The number of cases are starting to come down but there's a long time between now and then," he told Times Radio.

Heavy snow has fallen across large swathes of the UK as four vaccination centres were forced to close and a rare "thundersnow" event was reported.

The Met Office has issued snow and ice warnings as the flakes fell thick and fast in parts of England, Scotland, Wales and Northern Ireland on Sunday, with even London getting a rare dusting.

There was no distribution plan for the coronavirus vaccine set up by the Trump administration as the virus raged in its last months in office, new US President Joe Biden's chief of staff says.

"The process to distribute the vaccine, particularly outside of nursing homes and hospitals out into the community as a whole, did not really exist when we came into the White House," White House chief of staff Ron Klain told NBC on Sunday.

Newly sworn in President Joe Biden and his advisers are inheriting no coronavirus vaccine distribution plan to speak of from the Trump administration, sources tell CNN, posing a significant challenge for the new White House. https://t.co/n8zKpLvUDh

Biden plans to partner with state and local governments to establish vaccination spots in conference centres, stadiums and gyms.

The U.S. has surpassed 25 million confirmed cases of COVID-19.

US TV host Larry King died over the weekend at the age of 87, weeks after being admitted to Cedars-Sinai Medical Center in LA with coronavirus.

With a career spanning 63 years, King became a household name as the host of CNN’s Larry King Live, which logged a record-setting run of hours from 1985 to 2010.

Larry King, who was hospitalized with COVID-19 earlier this month, died in Los Angeles. https://t.co/8zpxbrwsoF

He interviewed an estimated 50,000 celebrities, politicians and sports stars during his career.

Ora Media confirmed King's death in a statement tweeted from his account. It did not specify the cause of death, but a spokesperson told CNN on January 4 that King had COVID-19, had received supplemental oxygen and had been moved out of intensive care.

"For 63 years and across the platforms of radio, television and digital media, Larry's many thousands of interviews, awards, and global acclaim stand as a testament to his unique and lasting talent as a broadcaster," the statement read.

Thousands arrested in Russian political protest, as the world watches on and condemns.

The fallout continues after thousands of supporters of Kremlin critic Alexei Navalny were arrested during protests, with tensions flaring between Russia and other world powers.

Police detained more than 3000 people and used force to break up rallies across Russia on Saturday in support of Navalny, who was arrested last weekend as he returned to Russia from Germany for the first time since he was poisoned with a nerve agent.

From the frozen streets of Siberia to the grand plazas of Moscow and St. Petersburg, tens of thousands of Russians are rallying in support of jailed opposition leader Aleksei Navalny. Follow live here: https://t.co/AiSqdRYaKl

The United States, the EU and Britain have all condemned the Russian security forces' handling of the protests, and the foreign ministers of France and Italy on Sunday both expressed support for sanctions.

Russian President Vladimir Putin rebuffed the condemnation on Sunday, with his spokesman saying it encourages Russians to break the law - dismissing the turnout at the protests - which included an estimated 15,000 people in Moscow alone - as insignificant.

Estonia's two biggest political parties say they have clinched a deal to form a new government to be led by a female prime minister for the first time in the Baltic country's history.

The new government will replace the previous cabinet that collapsed in a corruption scandal earlier this month, with the party councils expected to vote on Sunday in favour or joining a cabinet headed by the Reform Party's prime minister-designate Kaja Kallas.

President Kersti Kaljulaid, who is expected to appoint Kallas's cabinet in the next few days, said tackling Estonia's worsening coronavirus situation and the economic turmoil caused by the pandemic should be an immediate priority for the new government.

Pending approval from legislators, Kallas, 43, will become the first female head of government in the history of the small Baltic nation of 1.3 million, which regained its independence in the fall of the Soviet Union in 1991.

A lawyer and former European Parliament legislator, she is the daughter of Siim Kallas, a former prime minister and ex-European Union commissioner.

Outgoing Prime Minister Juri Ratas and his cabinet resigned on January 13 over a scandal involving a key official suspected of accepting a private donation for the party in exchange for a political favour on a property development.

- Argentina has become the largest nation in Latin America to legalise elective abortion after its Senate passed a law in December.

The law guarantees the procedure up to the 14th week of pregnancy and beyond that in cases of rape or when a woman's health is at risk.

- New Zealanders will find out today whether a new case of COVID-19 detected in the community will prompt new restrictions. It's the first local case since November.

- Tropical cyclone Eloise has wrecked thousands of buildings and displaced 7000 people in Mozambique.

- Mexican authorities have found 19 burned and shot bodies in a ute on a remote road near the US border.

- Egypt has begun its coronavirus vaccination program with the Chinese made vaccine, with frontline workers receiving the first jab.

james b 3 months ago