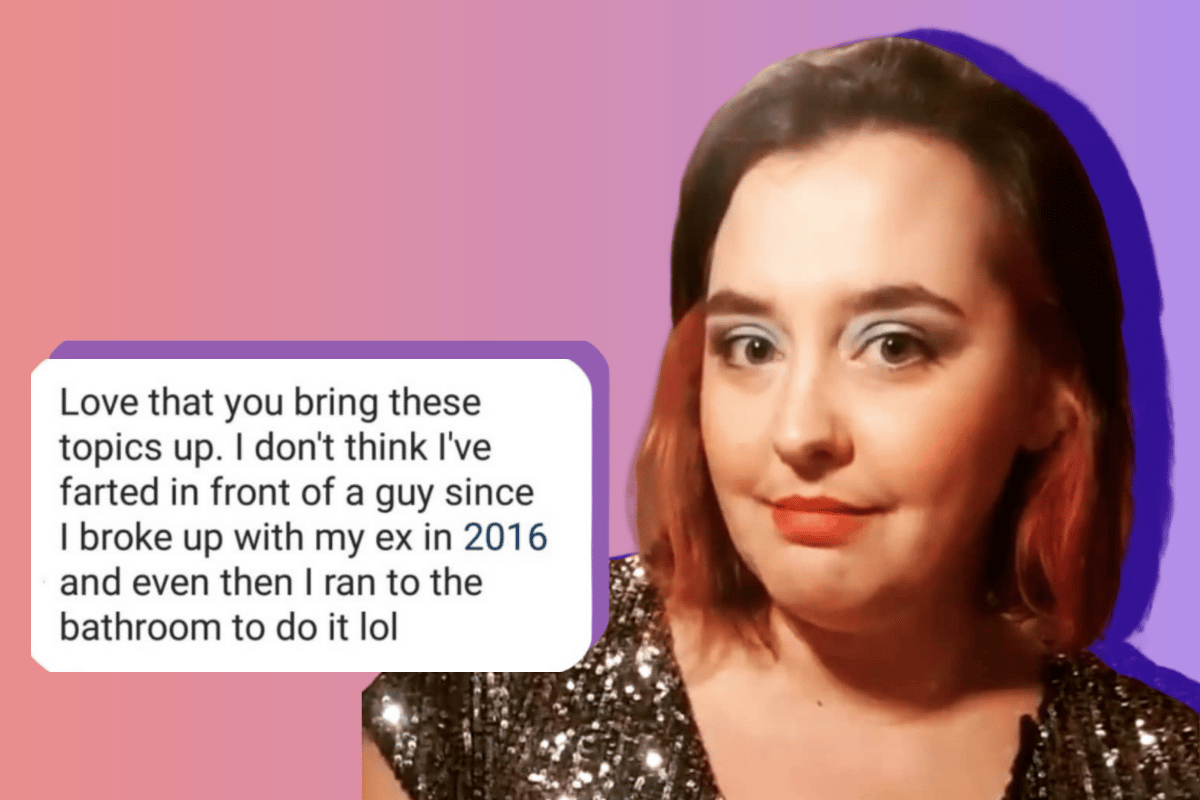 Back in October, I wrote here about discovering the disturbing depths that male hygiene (or lack thereof) can reach. Through my Instagram account @tindertranslators, I’ve also seen the flipside of this coin: the lengths some women will go to appear as if they never have any normal digestive functions for fear of being ‘gross’ or ‘unattractive’.

A while back, I asked my followers (only 7% of whom are men) “do you remember the whole ‘girls don’t poo’ narrative when we were younger? Like, no one believed it but somehow it was more gross/unattractive for girls to have normal bodily functions than for boys?”

I was worried that it was some random experience of my adolescence, but 92 per cent said they knew exactly what I meant. What’s more, 61% said they still hear that stuff now. You know the comments I mean – ‘girl’s farts smell like roses’ and all that nonsense.

But it is everywhere. Even the goddess that is Chrissy Teigen made a joke about “I don’t poop, I’m too beautiful” on her Instagram stories recently. And, look, I’ll forgive Chrissy for almost anything - she’s the queen of dry humour - but it’s telling how far and wide this ‘harmless’ joke has spread. The question is: is it actually harmless? Speaking to my followers on Instagram, I’d say the answer to that is no.

I’d go as far as to say that painting natural – and very necessary – human bodily functions as unfeminine is actually harming the health of women and girls.

When asked, 71 per cent said they wouldn’t fart in front of someone they were dating, which I can kind of get. However natural it may be, breaking wind isn’t exactly sexy. There are all kinds of human traits we hide when we first meet someone – whether that’s wise is a whole other conversation!

What was more telling was that a quarter said they still wouldn’t in a long-term relationship, while almost half said they still felt embarrassed about their long-term partner hearing/smelling their number twos. Now, I don’t have a representative group to survey for contrast, but I would bet my last toilet roll that all these numbers would be a lot lower if the sample was 93 per cent men.

And this whole thing starts young.

One woman shared that people already commented on her daughter’s bodily functions differently than her sons, while another said she had to chastise her husband for saying “that’s not very ladylike” to their two-year-old daughter when she farted. By the age of eight, one woman was shamed for pooing at an all-girls' sleepover; again, I can’t see boys doing this. 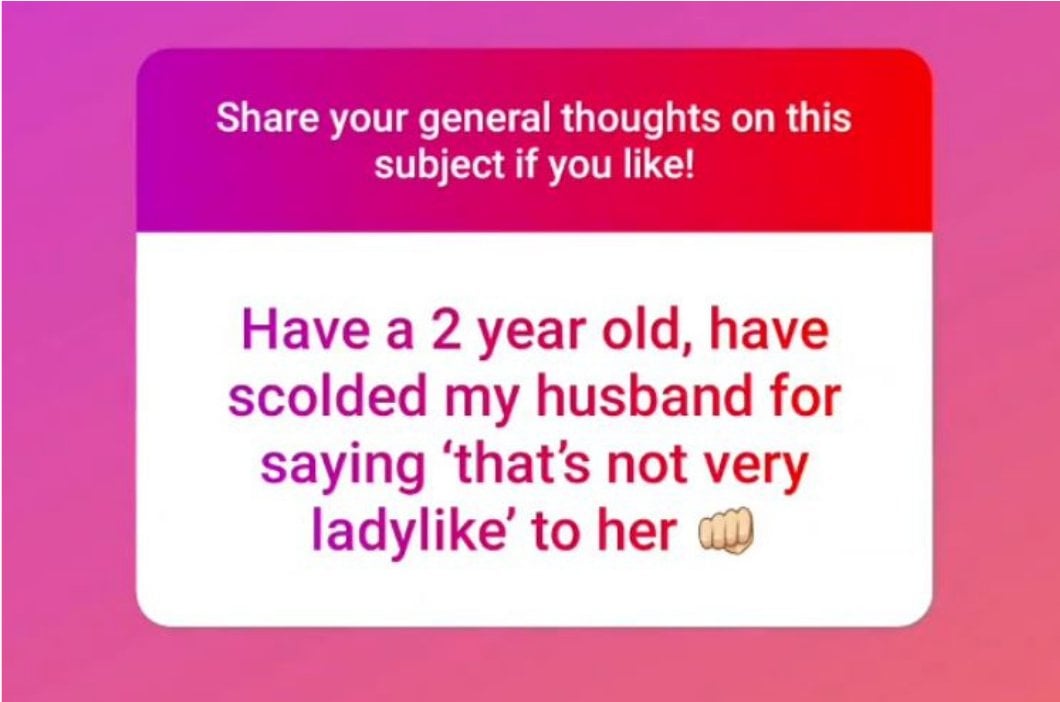 Boys are allowed, in essence to be fully human – because the spectrum of humanity includes, well, s**t. Doesn’t it? Meanwhile, from childhood, girls receive the message that their bodies have to be restrained and sanitised. As we grow, this curtailing of our bodies’ natural functions becomes attached to the idea of being attractive. Burping, farting and the rest are considered ‘laddish’ behaviours and in the gender binary world we live in – women being laddish is not deemed desirable.

No wonder then that I had so many messages from women effectively telling me they have ‘held it in’ to a shocking extent – some for five days straight or more – when with the men in their lives. 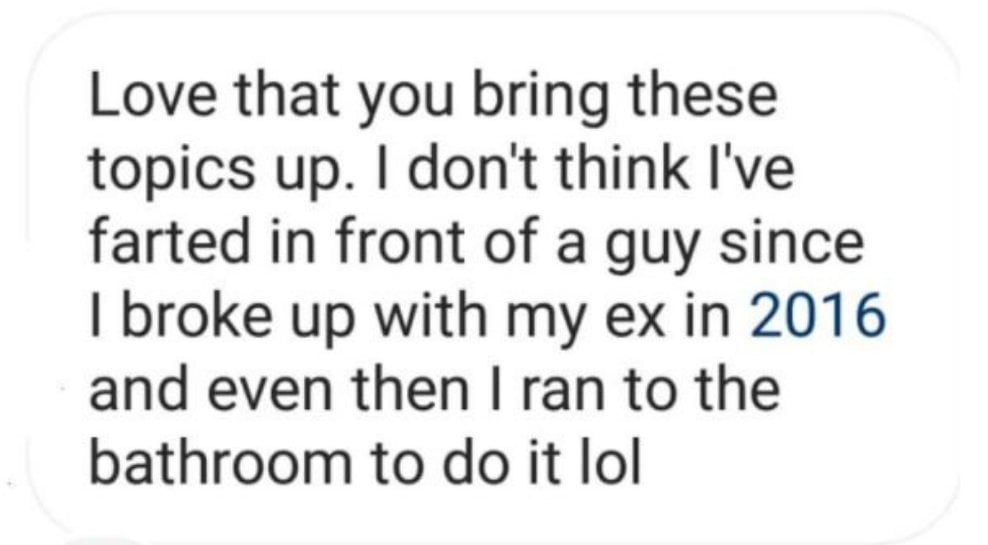 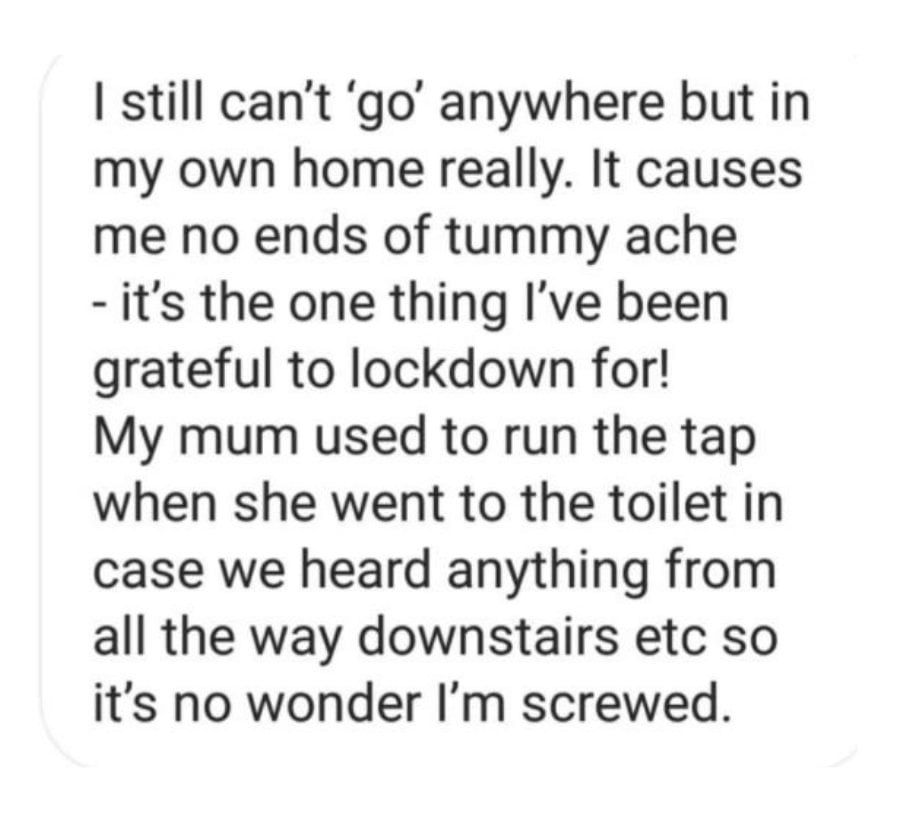 One young woman even said that, while her new boyfriend farts in front of her all the time, he wouldn’t ‘let’ her wee with him in hearing distance because “we’ve gotta keep the romance alive”. Don’t worry, I told her to dump him immediately.

But perhaps attitudes like this are why 61 per cent of those I asked said that they had made themselves ill because they held in poo due to shame and embarrassment. That’s three out of five women. And that’s the problem here – women are making themselves not only uncomfortable but actually sick by trying to conform to yet another unrealistic standard society has set for their body. 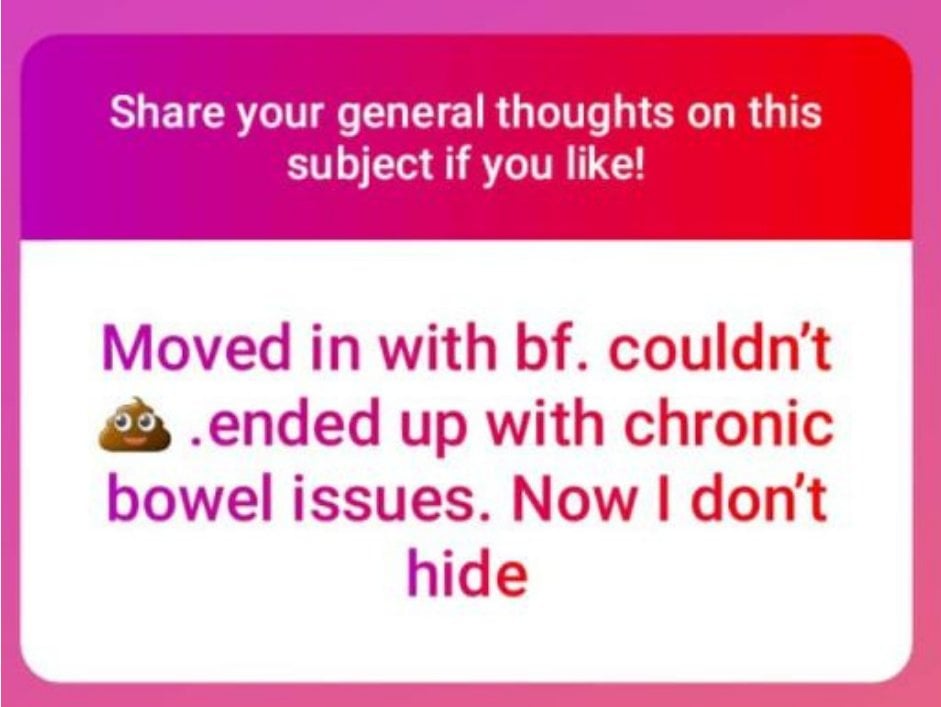 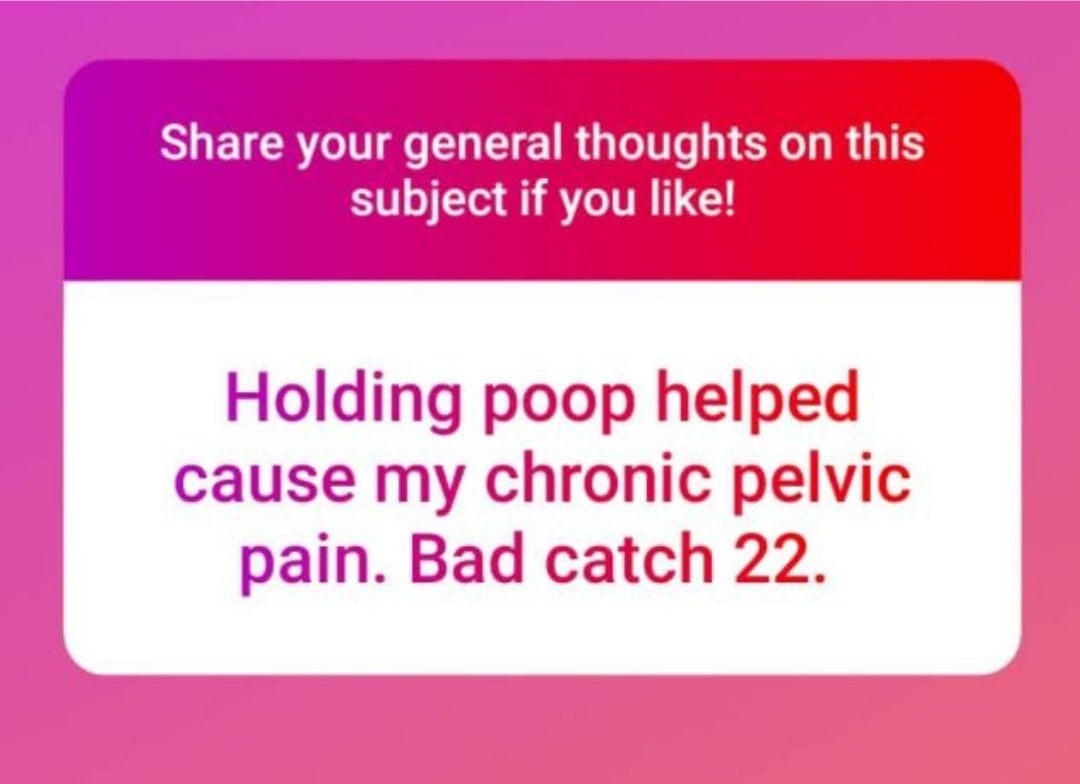 There were also a few women who told me they took “anti-gas” pills before dates or sleepovers – those things are not good for you if you have normal digestive function!

Whilst running these stories I was also inundated with messages from women who had tips on how to stealthily poo in public toilets and/or techniques on how to fart silently. Honestly, the amount of space the patriarchy occupies in our heads is wild – we are literally worried about going to the toilet in a toilet.

I take inspiration, though, from a twelve-year-old icon, the mother of whom wrote in to tell me that her daughter says "if you can’t handle my poo, then I’m not for you". I mean, somebody put that on a t-shirt!

Of course, these issues aren’t just about gender. There are plenty of women who poo with the door open, and fart freely (trust me, they’ve told me all about it). And to some extent there is an element of consideration in not just letting rip at any moment. But there are, without a doubt, gendered elements to it, and they are costly to the health and well-being of women. So, maybe we should just stop with the ‘girls don’t poo’ stuff, yeah?

You can follow Tinder Translators here, for more candid discussions about the reality of dating in 2020.

Reply
Upvote
1 upvotes
I farted in front of my partner in the first week and we laughed we hav been together over ten years we hav a joint bathroom /toilet he quite often waltzes in while I’m mid number two’s and goes I don’t bloody care vice versa if I need to get ready for work when his in there I get ready like honestly it’s ridiculous to think that one sex should be “ladylike” and not experience natural bodily functions. I do hav a friend who always says she doesn’t fart or poo and she gets quite embarrassed when I tease her about this and yes I tagged her on
Insta as soon as I seen this headline ha ha ha ha #allhumansfartandpooandwee

Reply
Upvote
@mamamia-user-515500734
We are exactly the same as you too. I was the first one to fart in our relationship and 9 years later it still causes us endless amounts of laughs when we both do it, daily. I can’t imagine being embarrassed about it and trying to hold it in- OUCH 😣
News
General
Opinion
True Crime
Politics
Sport
Explainer
Entertainment
Celebrity
Reality TV
Movies
TV
Books
Rogue
Royal
Lifestyle
Beauty
Fashion
Weddings
Home
Wellness
Health
Fitness
Travel
Food
Parents
Before The Bump
Pregnancy
Baby
Kids
Teens
School
Parent Opinion
Work & Money
Money
Finance
Career
Lady Startup
Relationships
Sex
Dating
Separation
Friendship
Family
Real Life
Couples