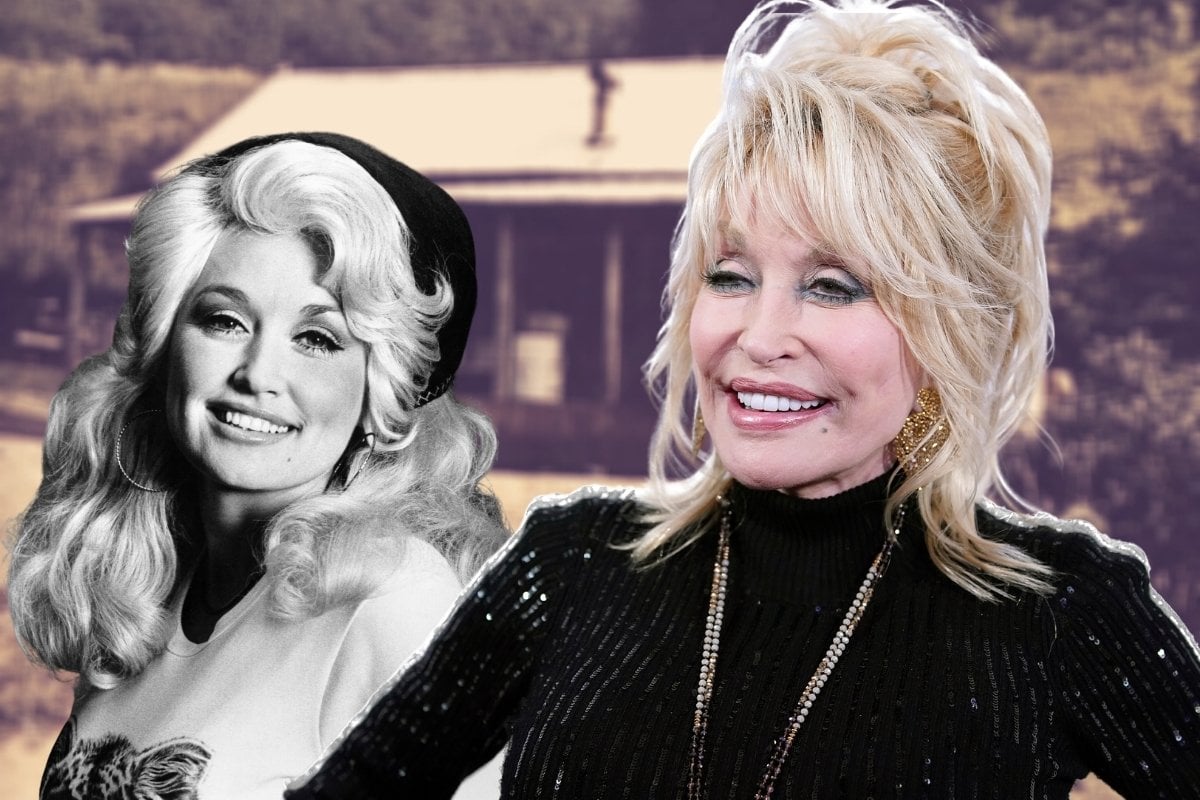 When country music icon Dolly Parton is asked what she'd want people to say about her 100 years from now, her answer is usually the same.

Even on her 75th birthday, the 'Jolene' singer has no plans to retire, no plans to trade the rhinestones and towering, platinum-blonde wigs for knits and blouses — or whatever else is meant to be 'appropriate' for a Southern woman of that age.

"I don’t know why I’d ever want to stop," she recently told The Weekend Australian Magazine. "Especially after you get older, you need things to do. I’d rather wear out than rust out. You only have one life."

And what a doozy it's been so far.

Poverty, music and the making of Dolly Parton.

Dolly was born in 1946, the fourth of 12 children to her poor, tobacco-farmer parents. Money was so tight, that Dolly's father famously paid the doctor who delivered her with a bag of cornmeal.

The family lived in a one-room house in the foothills of the Great Smoky Mountains in Tennessee.

There was no electricity or running water — "unless we'd run and get it," she once quipped — and there were three or four children to a bed. 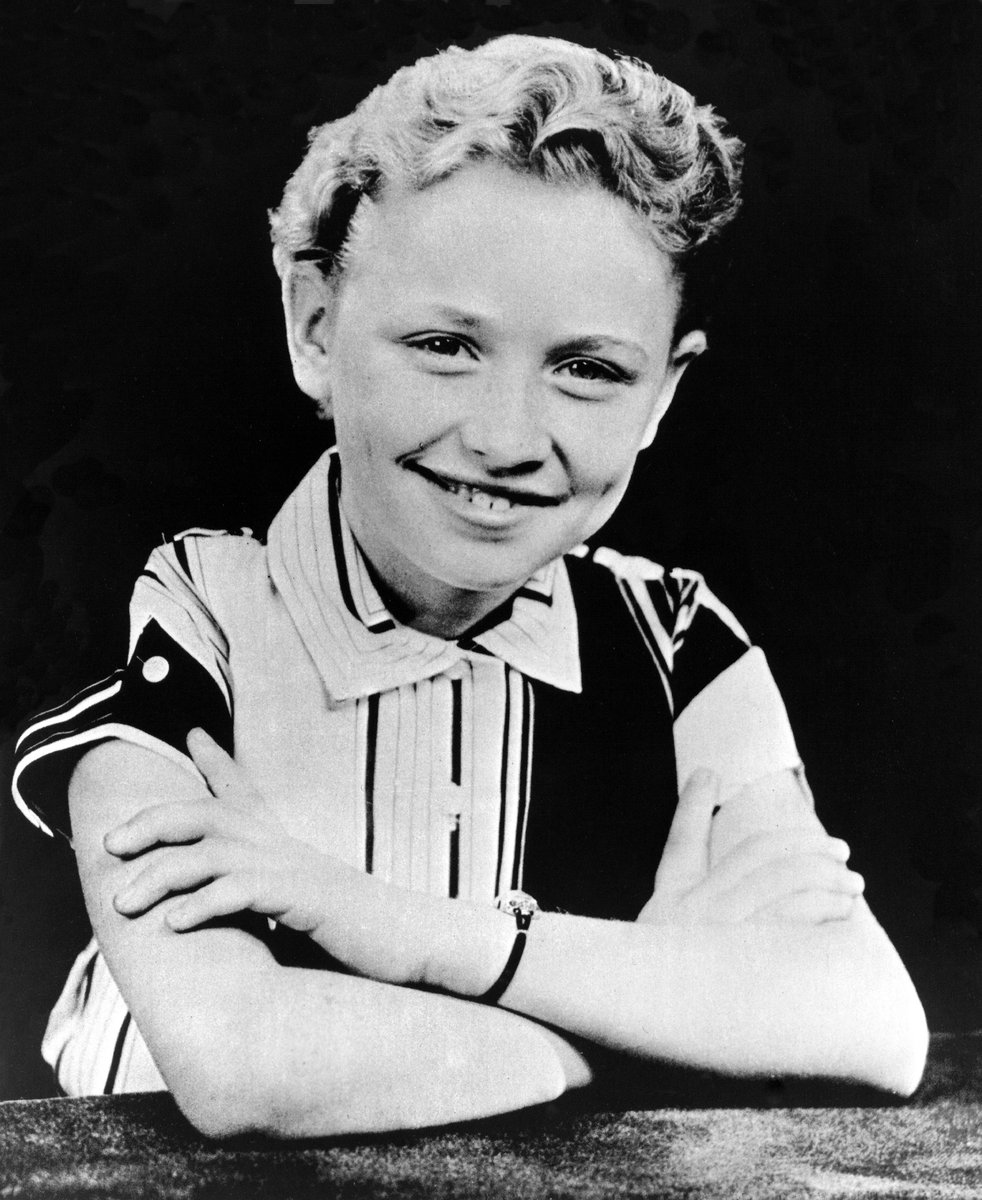 The eldest were tasked with caring for their younger siblings.

"My mother, through the years, when we were born, since there were so many of us, used to say, 'This one's gonna be your baby'," she told a press conference in 2015. "That just meant that you got to take extra care of it. You have got to get up with it at night and rock it back and forth."

But just four days after Dolly's "baby", her little brother Larry Parton, was born, the newborn tragically passed away. She was just nine years old at the time.

"There is a lot of heartache and stuff that goes on with that," Dolly said.

The Partons' poverty meant they often had to improvise. They hunted, canned their own food, made their own soap, and the walls of their home were decorated with newspaper. Even medical needs were tended to at home.

When Dolly was seven or eight, she leapt over a fence and landed on a broken mason jar, cutting several toes.

"I remember my dad and brothers holding me down, Mamma pouring kerosene on my toes. Mumma got her sewing needle... and Mamma sewed them back together enough to where they held," Dolly told NPR.

"They're fine, but I can see a little scar that goes across all three toes." 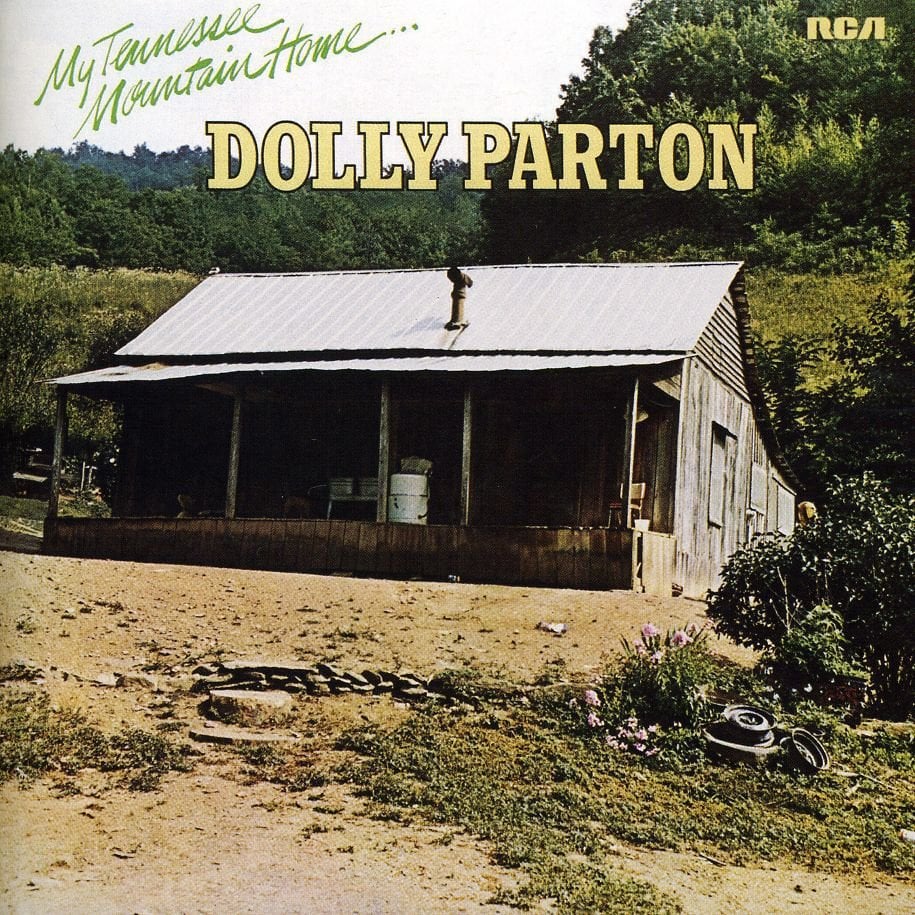 Dolly's childhood house on the cover of her 1973 album, 'My Tennessee Mountain Home'.

It was Dolly's mother and her grandfather, a Pentecostal preacher, who taught her to sing and fostered her love of music.

She picked up the guitar at age 7, and just three years later she started performing on Tennessee TV and radio shows.

She wrote her first single, 'Puppy Love', when she was just 11 years old. And two years later, in 1959, Johnny Cash introduced 13-year-old Dolly to the stage at the legendary Grand Ole Opry. Her performance was so popular, the young teen earned three encores.

The day after Dolly graduated high school in 1964, she was on the first bus to Nashville, Tennessee, and from there, her career in music truly began.

Though she left her poverty-stricken life in the Smokys behind, it lingered in the lyrics of some of her most famous songs. In 'The Coat of Many Colours' ("My coat of many colours that my mumma made for me, made only from rags, but I wore it so proudly..."), 'My Tennessee Mountain Home', 'In The Good Old Days (When Times Were Bad), and 'Tennessee Homesick Blues'.

It's there in her philanthropy too. Her main charitable organisation, Imagination Library, has distributed millions of books to underprivileged young children in honour of Dolly's father who had never been taught to read.

And it's there in her self-proclaimed "backwoods Barbie" aesthetic — a throwback to the women she'd see walking the streets when she'd go into town as a girl: "they were said to be trashy because they had blond hair and wore nail polish and tight clothes," she told Interview magazine in 1989.

"I thought they were beautiful." 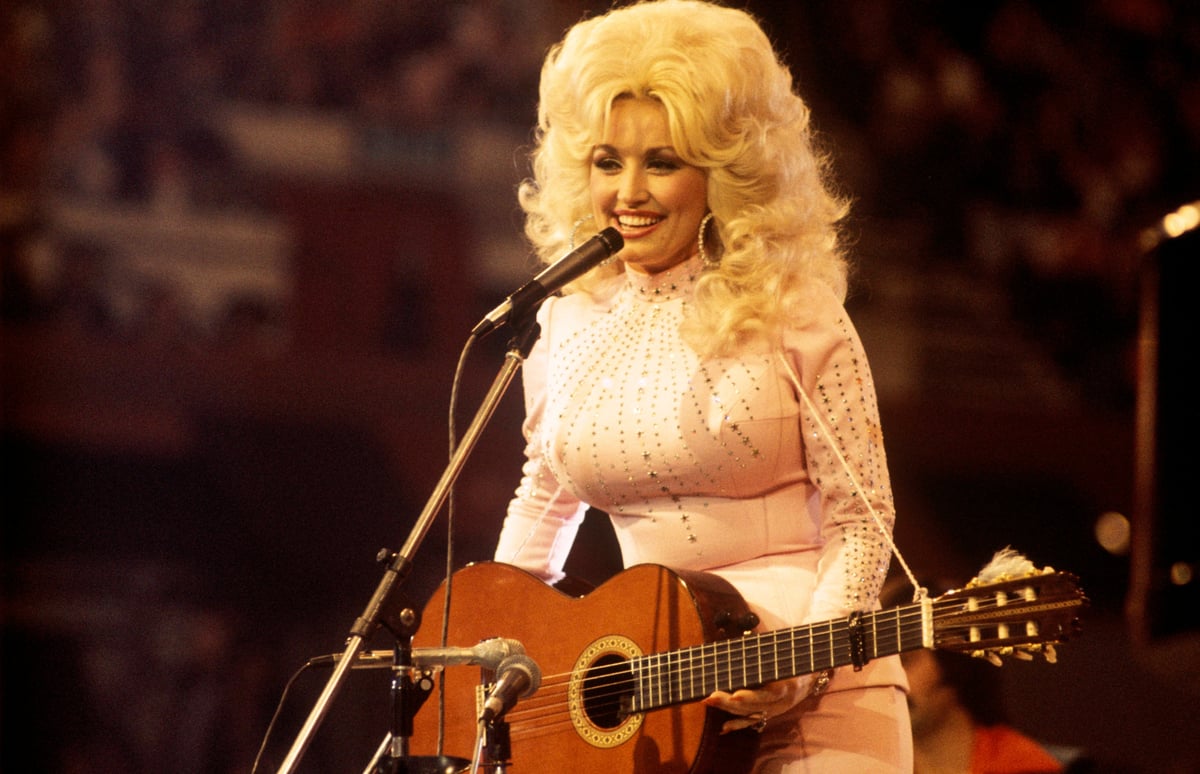 She's spent a fortune in the years since on clothes and wigs and jewellery to mimic them. As perhaps the most famous Dolly-ism of them all goes, "It costs a lot of money to look this cheap".

The Nashville music scene embraced it all. As did Hollywood.

Dolly the singer became Dolly the movie star courtesy of now-classics like 9 to 5, for which she also wrote the theme song (famously featuring Dolly strumming her acrylic nails together for percussion), The Best Little Whorehouse in Texas, and Steel Magnolias.

Along the way, she's released 64 studio albums, been nominated for 50 Grammys (second only to Beyonce) and won 10, received two Oscar nominations, one for an Emmy and one for a Tony, and more than 100 million record sales worldwide. 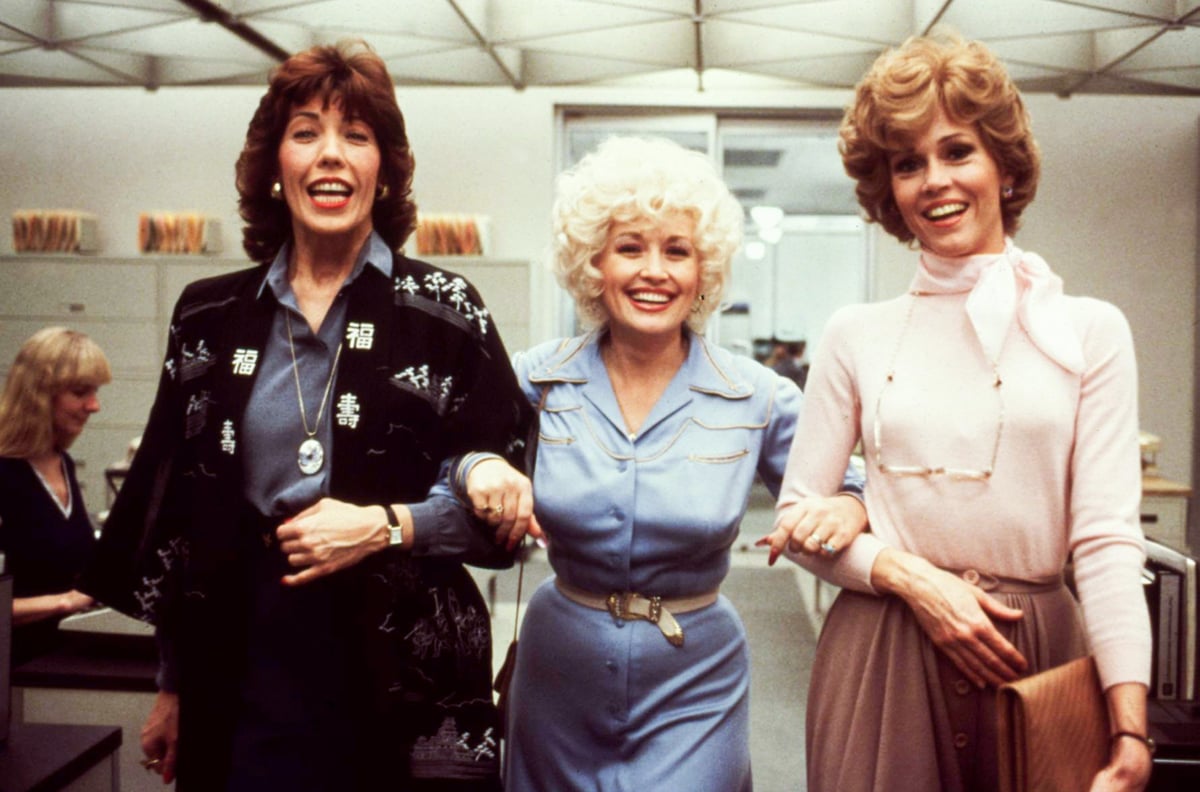 But her most successful song became so 20 years after she first recorded it, courtesy of Whitney Houston. When Dolly first heard the singer/actor's 1992 cover of 'I Will Always Love You' she was stunned.

"I thought my heart was gonna bust when I first heard it," she told 60 Minutes. "When it went into [the lyric] 'And I...', I almost wrecked the car; I had to pull over. 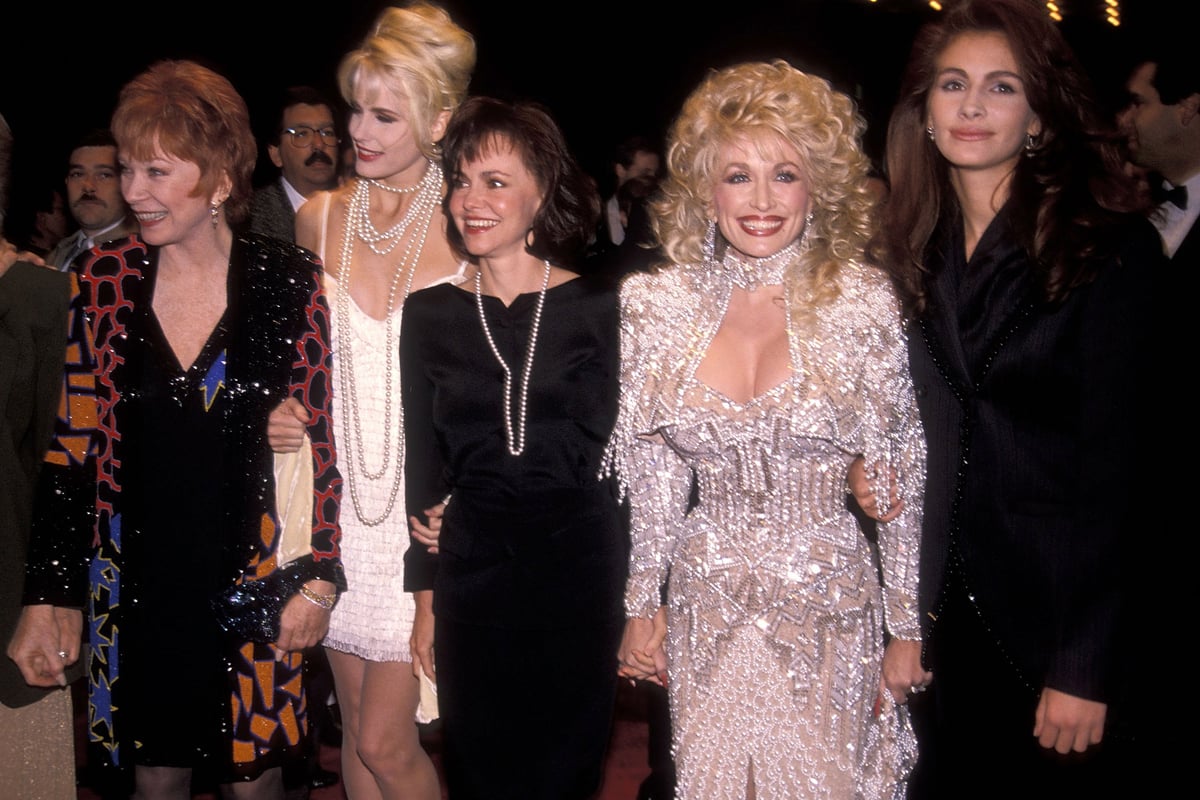 Beside Dolly through it all has been her husband Carl Dean, a man who has avoided the glare of the spotlight that's followed her for more than five decades.

"Carl has always been proud of me. As long as I don't drag him into my work, he's fine and lets me do what I want to do," she told AARP Magazine.

The pair met at a laundromat in 1964, and though her record label was worried marriage would get in way of her musical career, they eloped two years later. Just Dolly's mother, the preacher and his wife in attendance.

"My first thought was I'm gonna marry that girl," Dean said in a rare public statement on the couple's 50th wedding anniversary in 2016. "My second thought was, 'Lord she's good lookin.' And that was the day my life began. I wouldn't trade the last 50 years for nothing on this earth."

Like Dolly herself, their marriage isn't exactly conventional. She's described it as "totally open and free", and has alluded to physical relationships with other people: "I never went to bed with anywhere to get somewhere," she told 60 Minutes. "If I did that, I did that because that's what I wanted to do."

In an interview with Ladies Home Journal she also spoke about an "affair of the heart" with an unnamed friend that took place in the '80s and ended in a betrayal so painful it "just about killed me".

Around the same time, she underwent a partial hysterectomy due to a gynaecological condition and learned she wouldn't be able to have children.

Caught in a particularly dark moment in the aftermath of these events and other personal struggles, she contemplated suicide. But on the day she came closest, her dog, Popeye, ran into the room jolted her back to reality.

"I don't think I'd have done it, killed myself, but I can't say for sure," she said. "Now that I've gone through that terrible moment, I can certainly understand the possibilities even for someone solid like me if the pain gets bad enough." 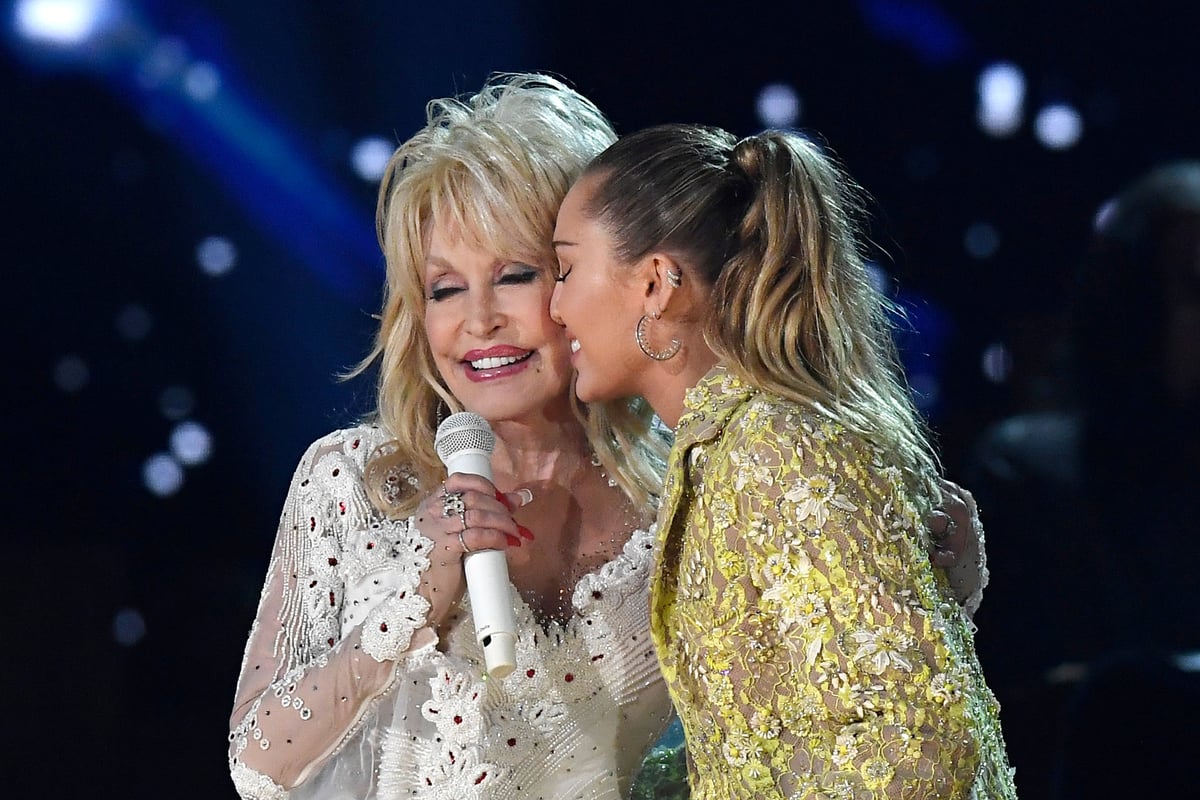 Dolly and her goddaughter, Miley Cyrus, performing together at the 2019 Grammys. Image: Getty.

Though Dolly and Carl are not biological parents, she is godmother to singer Miley Cyrus, whom she credits with introducing her to a new legion of fans.

Indeed, to the Disney Channel generation, Dolly is "Aunt Dolly", the eccentric godmother she played on Cyrus' 2006-2011 show, Hannah Montana.

"That, to me, is just an ultimate icon, because she’s never lied. Her songs are the truth," Miley told Apple Music of her 'Fairy Godmother'.

"She just found this balance of being. She is a superhero. Like she almost has a character, but it's true."

Or perhaps it's her generosity. She's known for using her sizeable, self-made fortune to aid others. From scholarships to habitat conservation, and even healthcare. (In 2020, she made a personal donation of US$1 million to research at Vanderbilt University to aid their work on the Moderna COVID-19 vaccine.)

Or maybe it's her gumption. As a fan told Family Circle back in 1979, "Dolly is everything I never dared to be. Sure, she’s outrageous looking. But just once, didn’t you ever want to do something outlandish — without worrying what everyone will say?”

Reply
Upvote
How does Beyoncé have more Grammy nominations than Dolly? I know that Beyoncé is Beyoncé... but Dolly is Dolly.
<
<deleted> 2 years ago