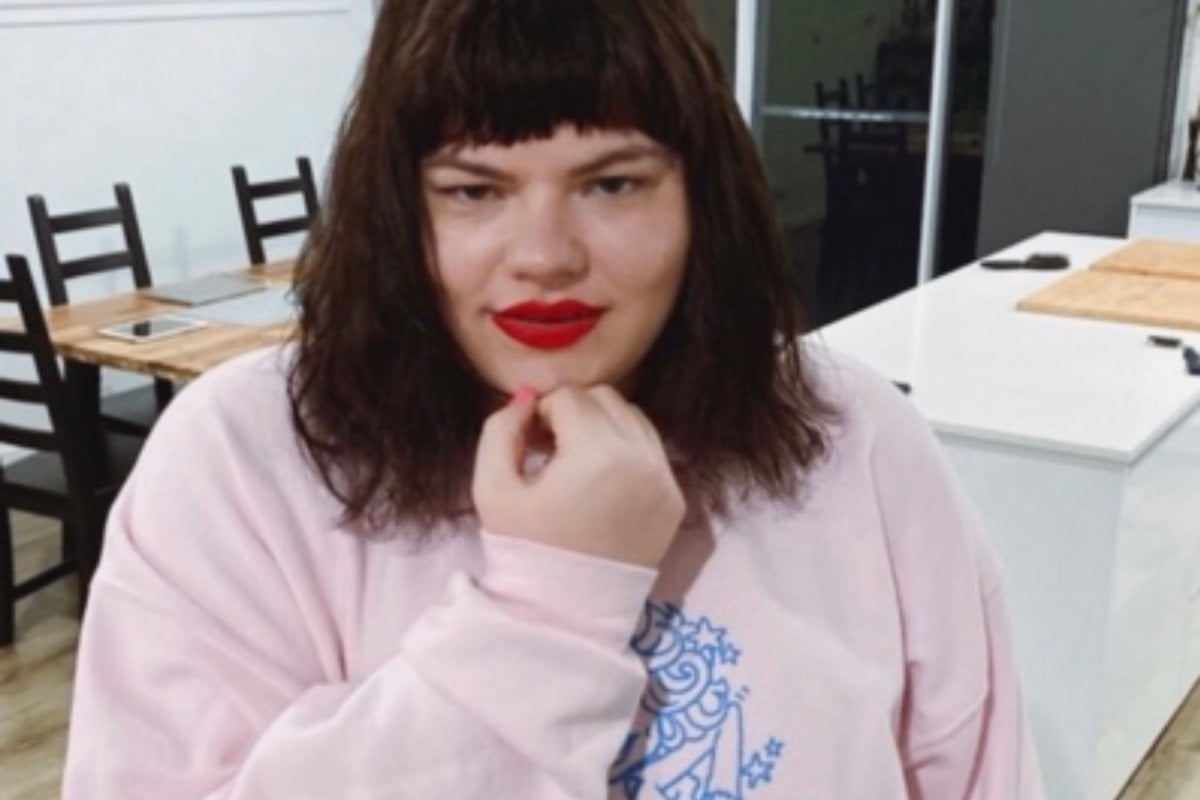 When I was a teenager, I met a grown man, and we dated. Except dated is probably too strong a word. We 'hung out' or we were a 'thing'.

The wording around our relationship was purposefully ambiguous and was created by him. I’m sure at the time I would have called him my 'soulmate', but I settled for being a 'thing'.

Everything in that relationship was created by him - every boundary, every norm - and I accepted it. Because, after all, he was the grown-up.

The fact he was a grown-up is what makes me so angry in retrospect.

I understand why I didn’t know better, but he should have known better.

Of course, he did, and he ultimately used it against me.

I've been thinking about it ever since Taylor Swift released her 10-minute version of 'All Too Well' - the song where Swift gives insight into her relationship with Jake Gyllenhaal, which featured a nine-year age gap.

The song includes my favourite line of all time, 'I'll get older but your lovers stay my age'.

I’ve been thinking about my relationship at 19 and how the power imbalance was so tipped in his favour. I never felt like I was on solid ground. (He has also continued to date younger women.)

I’ll spare you a lot of the details, because the relationship isn’t as romantic as I had romanticised it at 19. He was a very average guy, who liked action movies, beer gardens and boys' nights.

He wasn’t exactly a movie star, and our love affair mostly consisted of going to pubs and fish and chip shops, so it wasn't exactly novel-worthy. But I’ll give you some context, because it can explain a lot.

I’d just finished school with no idea what I wanted to do, and my dad had been really, really sick, like, intensive care sick.

I’d spent my final years of high school falling out with my girlfriends because I was heading to the hospital rather than attending parties and I was prone to bursting into tears at any given moment.

Suddenly, I found it hard to relate to anyone - I was going through some really adult stuff and no teen movie had prepared me for it!

I left school feeling drained and anxious. In short, I wasn’t in a great place.

Then I met him, and he seemed calming. After all, he was a grown-up!

He also made me feel seen. He laughed at my jokes, he pretended to understand my problems, and he made me feel pretty.

Considering I’d just spent the last few years being anxious about where to sit at lunch, feeling chosen was particularly alluring.

I also liked him. He was handsome and witty and he seemed to know about everything - from credit cards to drugs. Oh, and did I mention he had his own apartment?

So, our love affair began. Of course, what really began was me trying to convince him I was worldly and cool. Despite the fact I still lived in my childhood bedroom and had no idea how to do laundry, which he labelled 'cute'.

I think the reason he liked me in the first place was because I was young and malleable.

I tried desperately to be grown-up for him. It wasn’t exactly my best acting work, but did I try! (For instance, I never told him my mum still went with me to the doctors.)

Our relationship was all about him being the teacher and me learning from him. (I can’t bare to type student.)

I learnt that questioning where he was made me 'crazy' and that men didn’t like girls who were too 'needy'. Which meant I did my best to never ask anything from him and tried to seem independent and aloof. (This was particularly hard because I was going through a phase where I was a giant ball of need.)

I was constantly trying to earn his approval, and in retrospect, I now understand how wrong and ridiculously I was behaving.

I want to make clear our relationship was obviously completely consensual. I was honestly obsessed with him at the time, constantly checking my phone for a text. I was always trying to steer the conversation down a course that would end in him complimenting me.

I desperately wanted affirmation from him of any kind. Naturally, what I really wanted was for him to behave like the male leads in the teenage romance books I read, but he was incapable of that.

First of all, he wasn’t a teenager, and second of all, he was never going to write me a love letter or become a vampire. For him, this wasn’t some big love affair. This was just a bit of 'fun'.

Except, I wasn’t having fun. I was immersed in the torturous feelings of first love.

Practically our relationship didn’t work. I found all his friends boring because they were older and talked about things that felt irrelevant to me, and he found all my friends childish.

I’m pretty sure he was embarrassed by my age, but I wasn’t that perceptive at the time, you know, because my brain was still developing.

Our relationship could only flourish if I was actively adoring him, otherwise I’m pretty sure he just found me annoying. He also really hated my taste in music. Turns out a grown man doesn’t appreciate the musical sounds of The Jonas Brothers.

What he got from me? Well, I think he got someone that adored him, never questioned him, and allowed everything to be on his terms, even sexually.

It wasn’t that we had bad sex, but I still had no idea what I liked or didn’t like. I trusted him in every aspect of our relationship. I imagine that made him feel good, or maybe even a little bit powerful?

Someone his own age would have had more of a sense of who she was, and what she wanted and wouldn’t have just felt a relationship was about pleasing the man. Perhaps, I was just easier?

It all crashed and burned, of course. He casually told me it was over and I sobbed for months. I felt so incredibly low about myself and had to come to the realisation that he never saw me as a permanent fixture, and that was hard to take.

I moved on from that relationship eventually, and honestly I never really think about him now. But I still remember the pain and the sense that I had been used in some way.

I never felt abused, let’s get that straight, but I knew that in some ways my youth and vulnerability had not been cherished, just toyed with and discarded.

Still, hindsight is 20/20, and when I look back on the relationship, I feel anger.

I was vulnerable and I’m sure he saw that. I think that was part of my appeal. I was willing to please and desperate for love.

If he wanted an actual balanced relationship, he would have gone for someone more his age. I can’t imagine he actually realised this, but I don’t think it sat entirely comfortably with him either, hence the reason he never met my family or close friends.

Our relationship couldn’t really exist in the cold, hard light of day.

Still, I feel mad that my first love wasn’t tentative kisses and awkwardness.

There might be something to be said for a schoolyard romance.

Instead, it was filled with me trying to get a grown man to find me cool and sophisticated. It was never quite right.

If I saw him in the street now what would I say? Well, that's a hard one, I think I’d start with, "Hey, how are you?" And finish with, "I hope you understand women don’t just exist to make you feel good about yourself."

Reply
Upvote
4 upvotes
While this was your experience let’s not paint a pic that all old ‘v’ young relationships end this way! I dated a 30yr old guy when I was 18….. he has been my rock, my best friend. We have been together 17years, and married 7yrs of those, 1 baby, and hoping for another soon.  Yes we have our BS like all relationships, but can’t say we ever had this power imbalance. Anywhoo just a story to show not all hope is lost! Ha :)
M
mamamia-user-482898552 7 months ago

Reply
Upvote
@georgio There seems to be a run on "relationships with age differences are bad" articles of late. It would be good to see a bit of balance to this narrative.

Thank you so much for your message. I will relay your feedback to the team, but we do have an article recently published on the site if you would like to read: 'I'm 35. My boyfriend is a decade younger. It's the healthiest relationship I've been in.'

Reply
Upvote
1 upvotes
@Moderator Hi there - that's one article, last month. This month alone, there's been at least three antithesis articles that have been negative towards relationships with age gaps. Clearly the site seems keen on Taylor Swift themed things, but it's made for lopsided editorial content.
A
alix12 7 months ago

Reply
Upvote
@georgio there are always exceptions, but by far most relationships where a much older man dates a woman who's practically still a child, is not healthy or equitable. I dated several men who were 10+ years older than me when I was a teenager and in my early 20's and my experiences mirror the article authors. They weren't bad people, but in hindsight, they were slightly pathetic.
M
mamamia-user-450417826 7 months ago

Reply
Upvote
Ugh can relate 😔
Had a 25 year old bf when I was 17. Thought I was so cool and grown up but was just his plaything for 2 years. It was so pathetic - I always pining over him, and he would dump me then take me back when it suited him, only to cheat on me at the very end.
He was also my manager at my part time job - so disturbing to think about now that I’m 30.
News
General
Opinion
True Crime
Politics
Sport
Explainer
Entertainment
Celebrity
Reality TV
Movies
TV
Books
Rogue
Royal
Lifestyle
Beauty
Fashion
Weddings
Home
Wellness
Health
Fitness
Travel
Food
Family
Before The Bump
Pregnancy
Baby
Kids
Teens
School
Parent Opinion
Work & Money
Money
Finance
Career
Lady Startup
Relationships
Sex
Dating
Separation
Friendship
Family
Real Life
Couples