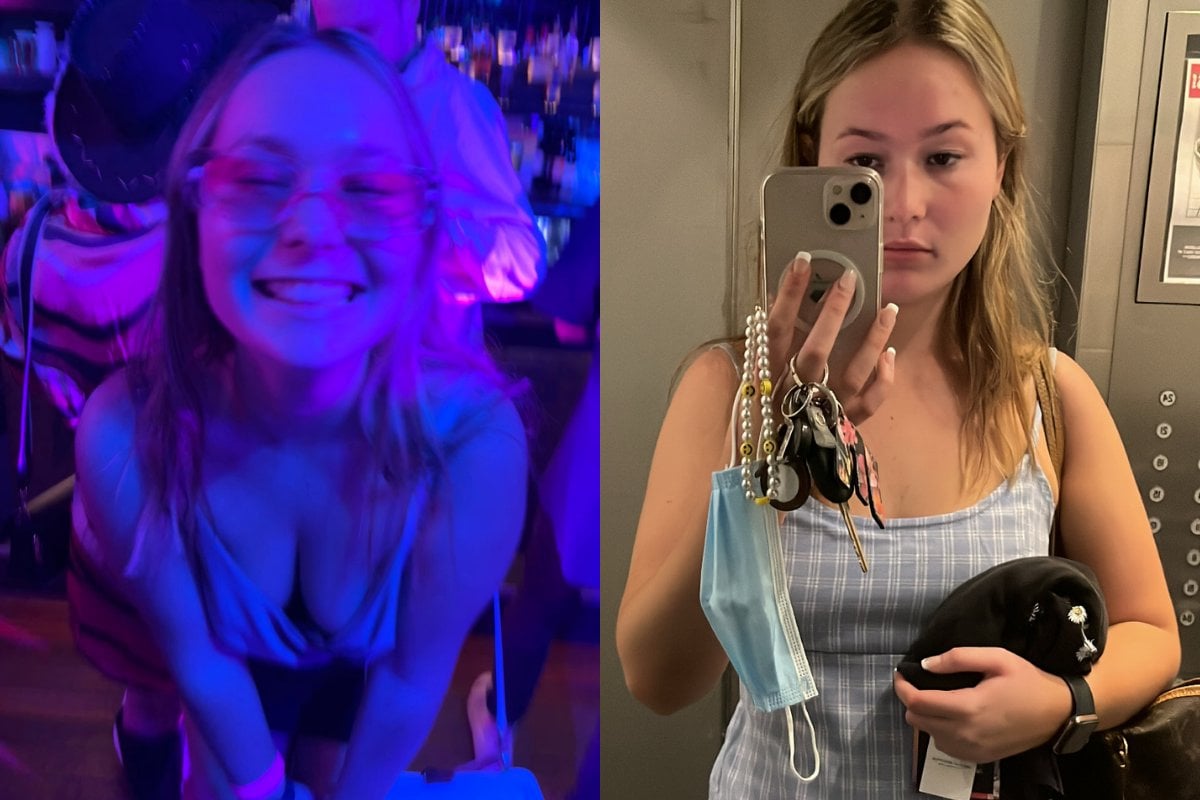 Hi, I’m Emma, and about once or twice a week (on Saturday and Sunday mornings, to be specific), I’m prone to serious bouts of hangxiety.

Following a night of heavy drinking, accompanying your typical hangover symptoms, is a horrendous feeling of dread, regret, shame, embarrassment, loneliness, and... anxiety.

If you’re anything like me, you might spend the day drifting in and out of sleep, trying to forget the previous night’s antics. It sucks. So much so, that as the end of the work week looms ahead, the anxiety starts kicking in again for what is to come.

Watch: The five best foods to cure a hangover. Post continues below.

You’d think it would be enough to put me off drinking altogether, but alas, I’m not so self-aware just yet.

I know, I know, drinking is bad. But it’s also liberating, and fun, and a novelty that still hasn’t worn off for me two years into being "legal", and I’m not willing to give it up just yet.

I want to enjoy the buzz of getting ready on a Friday night with a seltzer in hand. Because alcohol can be enjoyed and consumed safely.

So, indulge me for a moment, because this is not a sobriety piece (you can find that here). Today, I'm looking at the ways to get over a rough night — STAT.

It goes without saying, always drink responsibly and stay safe. I do. I'm just severely prone to hangovers and don't fare well on less sleep than usual.

So here are the six things I tried to cure my hangxiety after a big night out.

Before you go out:

A key aspect of lessening hangxiety symptoms is first and foremost, lessening hangover symptoms. That's why it's so important to hydrate.

This time around, I prepared for my evening by buying two Powerades, a Bae Juice, and ibuprofen.

"But Emma, what's a Bae Juice?" I hear you asking.

Bea Juice is a Korean pear juice, and it's been scientifically proven to reduce hangovers.

It might set you back an arm and a leg ($4.20 for ONE pouch? Do you think I'm made of money?!), but drink this before you kick off your night of drinking and you'll feel fresh as a daisy the next morning... at least I did. 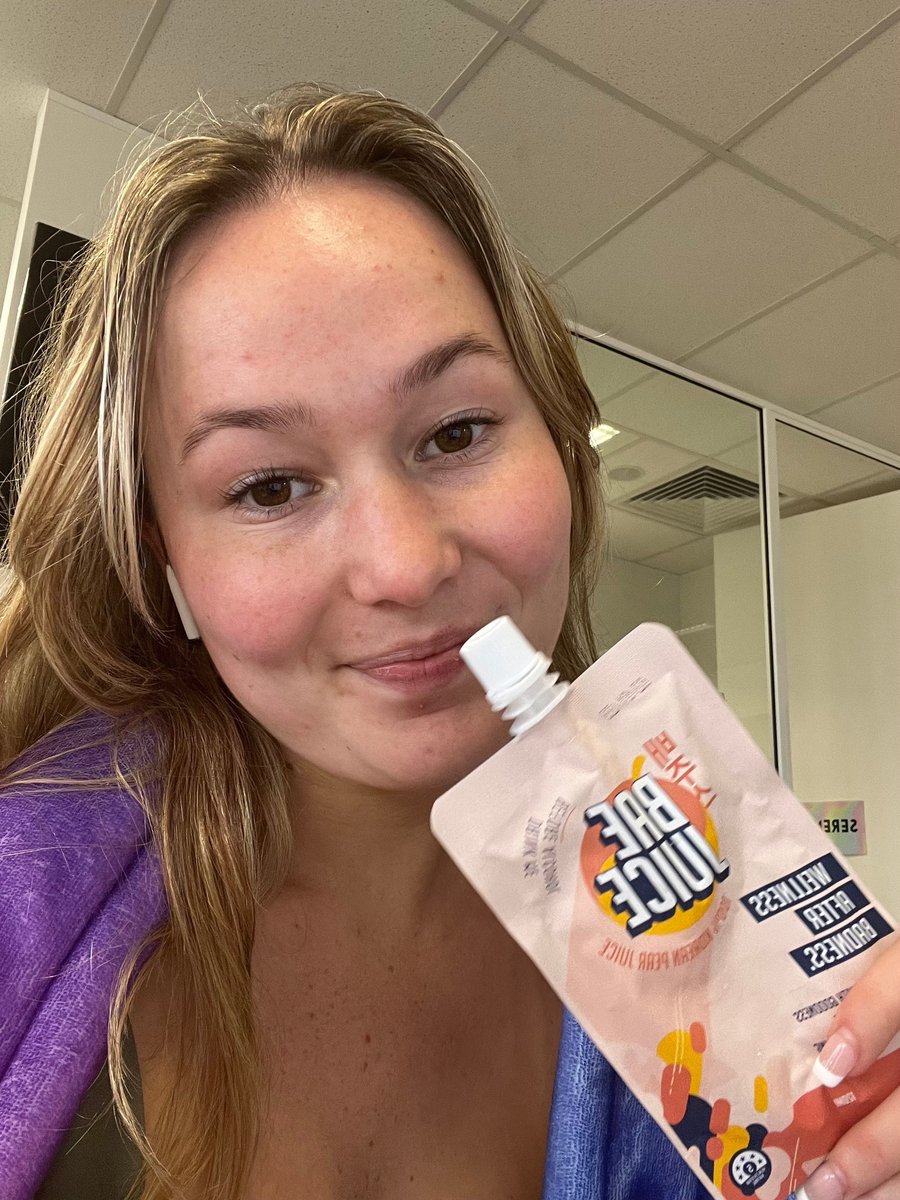 Make plans for the next day.

Suggestions include: a very late brunch with your un-judgemental bestie OR a lazy day to re-watch all the Twilight movies.

Making plans for your next day will do one of two things:

1. It will give you a reason to take it easy when you're reaching for drink number six. (Maddie is counting on you to pick her up from the airport! Don't let her down!)

2. It will help you help yourself to relax.

If you've made space for yourself to have a long lie-in and a microwave meal for lunch, you can do that completely guilt-free.

I think making plans (to do nothing) was one of the best hangxiety cures I could've tried.

I, like many, hate feeling like I've wasted my day by not doing something. So by making plans - whether that consists of a low-key, easy catch up with a friend or doing absolutely nothing at all - I can meet the expectation I set for myself.

In this experiment I blocked out my day to do play Sudoku with my housemate. As far as hangovers go, this was a pretty good solution.

Check in with yourself throughout the night.

Apparently, you can reduce hangxiety by drinking more mindfully. Who would've thought?

Maybe you've got the self-control to check in when feels right, but I made this a non-negotiable step by limiting my cash flow.

I only kept enough money in my spending account to allow for two drinks, then I did a self-evaluation before purchasing another. Do I really need to spend $11 on another vodka soda? Could I avoid the line and grab a glass of water from the side of the bar?

The answer is surprisingly often yes. That drink is a habit, not a necessary buzz.

If you do need one or two more though, transfer your money through one drink at a time. Create a little pause in your habit.

Your bank account will thank you for this one.

No moping around all day. Not this time.

On a particularly rough Sunday morning, I pulled myself out of bed and dragged myself to the shower.

And I have to say, it was bliss. Really washing off last night's makeup? There's nothing like it!

Brush your teeth, give your hair a wash, and maybe even exfoliate. Last night's sins? Cancelled! They're done.

Next, I ordered myself a particularly greasy Domino's Pizza, garlic bread, chips AND Pepsi, before surrounding myself with food on my couch.

I love Domino's. I love this tradition. I was distracted by clean hair and delicious food and I wholeheartedly recommend this method.

There's a particular TikTok I watch for comfort when I'm feeling sad and sorry for myself after an expensive night of drinking. Allow me to share it here:

But it's true! I spend far too much time thinking about all the silly things I did while drunk, but what does it really matter in the scheme of things?

Just cut back on the drinks.

I know. You don't want to hear it just as much as I don't. But there's one irrefutable fact. The cure for hangxiety is... not drinking.

I'm not asking you to swear yourself to sobriety for the indefinite future, but I encourage you to try cutting yourself off at one or two drinks and ask yourself: 'Why do I want more?'

Maybe like me, you're simply drinking to fit in. Or maybe it's social lubricant.

Well chances are, everyone around you is drunk and you can schmooze off their drunkness to fake confidence. After all, they probably won't remember it, anyway.

Writing yourself off may sound like a good idea in the moment, but next time you go out, have a think about how good it'll feel tomorrow when you can get up in the morning without feeling like sh*t. It's worth it, I promise.