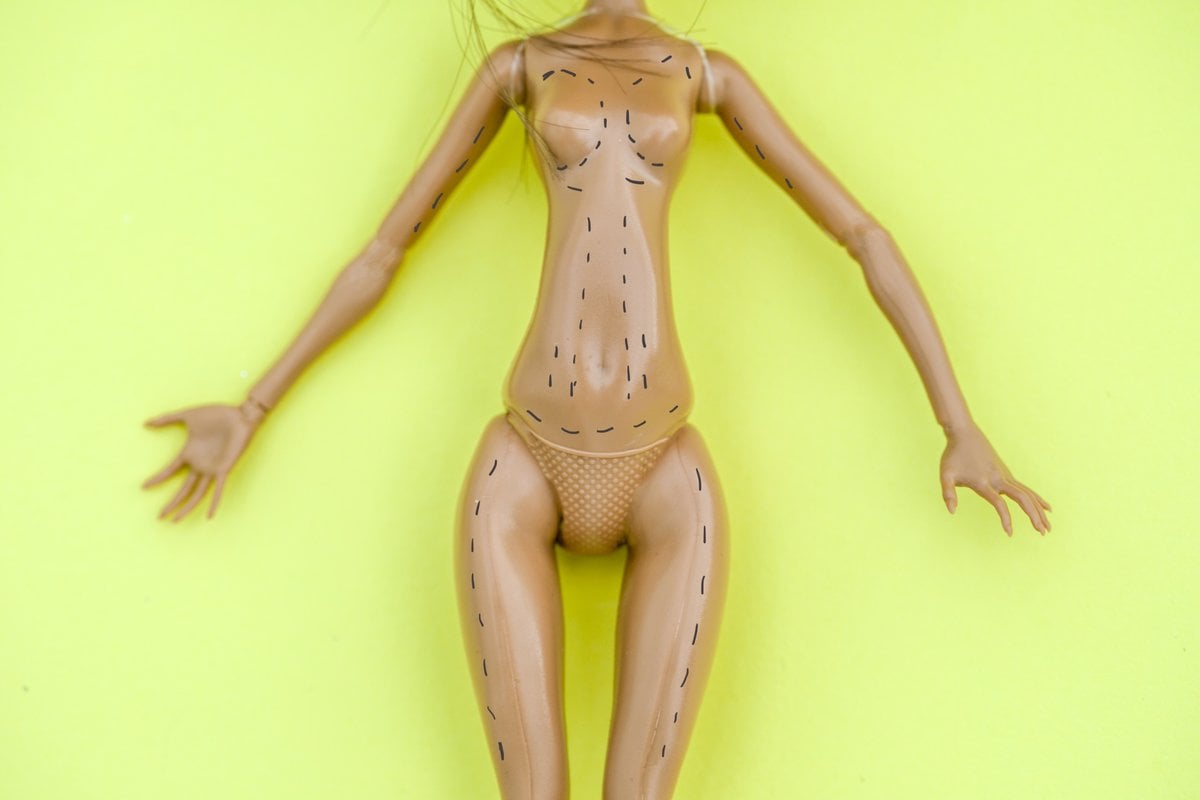 When it comes to cosmetic surgery, there are so many questions.

Here, four women anonymously tell all about the cosmetic surgery procedures they had.

Breast enlargement: "They look like my original boobs, not bolt-ons."

"I always had bigger boobs, but then I went through a really radical lifestyle change about four years ago and lost a lot of weight and actually lost my boobs.

"I went from a C or D cup to an A or B, at best, and had these weird little saggy pockets of skin just sitting there. I just didn’t feel like myself and felt really self-conscious.

"But it’s such a big decision – it’s major surgery and it’s a foreign substance in your body. I said to myself, ‘If I still feel like this in 12 months’ time, I’m going to do something about it."

“$25,000. I did a lot of research. I looked at websites, I looked at reviews, I spoke to people who had been to particular surgeons and then I cut the shortlist down to two. I met with those two, and then it just came down to how comfortable I felt with them and the level of care I thought I’d get. It didn’t come down to price for me.”

“My surgeon is at the forefront of breast augmentation. It was day surgery.

"I was dropped off in the morning by my partner and I was picked up in the afternoon. Obviously I was in pain, but nothing crazy, not at all as bad as I was expecting.

"I wasn’t bandaged for any period of time. I actually ended up having a 30th birthday party five days later.

"Stupidly, at the party, I got a little bit drunk and must have moved strangely and ended up back in hospital with busted stitches.

"And then three months after surgery I fell over and tore the implant off my chest wall, so that caused complications for probably another three months."

"I love them. I’m obsessed with them. They look like my original boobs did. They don’t look like bolt-ons. They look really natural. I’m thrilled.

"Breast implants are getting such a bad rap at the moment. I think there’s many, many of us who have had wonderful experiences, who feel very good about them. I often think to myself, ‘What else could I have done with $25,000?’ But no regrets."

Liposuction: "I bought a pair of cargo pants and I was like, ‘Oh my God, hooray!’"

"I was a little bit out of proportion. I had a very small waist, like a 25-inch waist, but I was quite big in the thigh area. So if I could get a pair of jeans over my thighs, they used to just sit at the back all stupid.

"I could never get a pair of jeans to fit. No matter how much weight I lost it was always the same. My thighs would still be bigger than the rest of me.

"I went to a plastic surgeon and I said, ‘What can be done here?’ He said, ‘Your build’s your build. You’re never going to have thin legs.’ He was honest about it."

"I remember pulling the sheet down and going, ‘They’re quite a bit thinner,’ but the surgeon said, ‘Oh, they don’t swell for a couple of days. The swelling kicks in and then you’re going to go a rainbow of colours. Take it easy. Wear the compression stockings.’ I started a new job a day later.

"But I was up and about. It was uncomfortable but not agonising for three or four days."

"The surgeon said to me, ‘You won’t see the full effects for a year,’ but I could see the difference straightaway. It put me more in proportion.

"I remember the first time I bought a pair of cargo pants and I finally fit in them. I was like, ‘Oh my God, hooray, I got exactly what I paid for!’ I’ve since gone on to have two children.

"I’ve had that weight gain and I’ve always managed to get it back off. I’m nearly 40, but because I’ve had breast implants as well, people are like, ‘My God, you are perfect.’

"I say to people, ‘I’ve had plastic surgery.’ I do look after myself as well. I think people think it’s going to be a magical cure, that you’ll never put on weight again. But if you don’t look after yourself, absolutely you’ll put weight back on."

Breast reduction: "It was enough to make me cry sporadically for months."

"I have struggled with large breasts since puberty around age 14. They were nice at first and I loved them when I was 18, but at age 24 they had continued to grow to the point of discomfort.

"I couldn’t wear the same clothes my friends could wear without looking provocative, shopping for clothes and bras that fit was difficult and expensive, and they were heavy and saggy.

"When I looked in the mirror I didn’t feel like it was me anymore. I constantly looked overweight due to my 10HH breasts."

“With my private health insurance and Medicare, I was out of pocket roughly $10,800.”

"The recovery was difficult but not as bad as I was worried it might be.

"The pain was intense but got easier every day. The fatigue affected me more than the pain for a couple of months afterwards. I felt incredibly sensitive in certain spots for months, but now, at 14 months on, I feel completely recovered."

"I couldn’t be happier. The feeling of looking in the mirror after the surgery and even getting dressed in clothes I never dreamed I could wear was enough to make me cry sporadically for months afterwards.

"I can barely remember what it was like not having the smaller breasts I have now. I have zero regrets. While there are some noticeable scars – I am quite pale and therefore suffer from occasional redness – my breasts are phenomenal compared to what they were before.

"I wish I had done it sooner. I denied myself the privilege of being comfortable in my body because I was scared of what people might say or think."

Nose job: "The bridge of my nose had collapsed, the old Michael Jackson thing."

"I’d always wanted to have a nose job. I had a very narrow, skinny nose with a bump on the bridge and was teased mercilessly in high school for it.

"I was called names like ‘Witchypoo’ and ‘Manimal’. I was probably near contemplating suicide, it was that relentless. Then, when I was about 27, I was in the wrong place at the wrong time.

"I was walking through a crowd in a nightclub and someone took a swing at somebody else and connected with my face and broke my nose. So I had to get it fixed then. I was so excited to get it done."

"I didn’t have to pay for it myself because I’d been hit in the face by somebody and had that person charged with assault."

"I went to an ear, nose and throat specialist and he did a really bad job. I bled a lot. By day three my eyes were completely swollen shut and I was black from my eyebrows to my top lip.

"My mother looked at me and started heaving. Buffy The Vampire Slayer was on TV at the time and she said, ‘You look like your face is transforming into one of the vampires.’

"The pain wasn’t too bad. You tend to forget about the pain. Then my first day back at work, somebody came up, not knowing I’d had surgery, took hold of my nose, gave it a wiggle, said, ‘How you doing?’ and dislocated it.

"The surgeon tried to push it back into place but over time it developed an even worse bump, it actually became a beak and it was very, very off-centre. Then I broke my nose again changing a water cooler bottle at work.

"The whole mechanism came apart and literally smashed my nose onto the side of my face. I went to another ear, nose and throat specialist. I did a bit of research this time and he specialised in difficult nose surgeries.

"He re-broke it and fixed it but said it was a mess inside my nose, that the first surgeon had done a terrible job of it.

"A couple of years later I was really struggling to breathe. I went to an ear, nose and throat specialist and she sent me to a plastic surgeon.

"The bridge of my nose, all the way down my nostrils, had collapsed, on one side worse than the other. It was the old Michael Jackson thing. The plastic surgeon did a complete nasal reconstruction and took cartilage out of my ears to rebuild my nose.

"After the surgery I had to sleep sitting up for three weeks in case there was any bleeding. Now I have a big lump that sits out quite severely and it’s started collapsing again.

"I can’t have any more surgery because it’s all scar tissue up there. There are nights I’ll wake up and just go, ‘Uhhhhhhhh!’ because I realise that my nose has closed off and I’ve stopped breathing. I’ll quite often stick the bottom end of a pair of tweezers up my nostrils and twist it to the side to try and push the cartilage out a bit.”

"I wish I still had nose number one. But it hasn’t put me off having cosmetic surgery of any sort. I’m about to have my eyelids done because I’ve got quite droopy eyelids and I’m about to have a gastric bypass to help with weight loss and then I’ll need a breast lift and a tummy tuck. It’s just made me go, ‘Don’t rush into anything, join groups, ask a lot of questions, research surgeons. Really do your research.'"