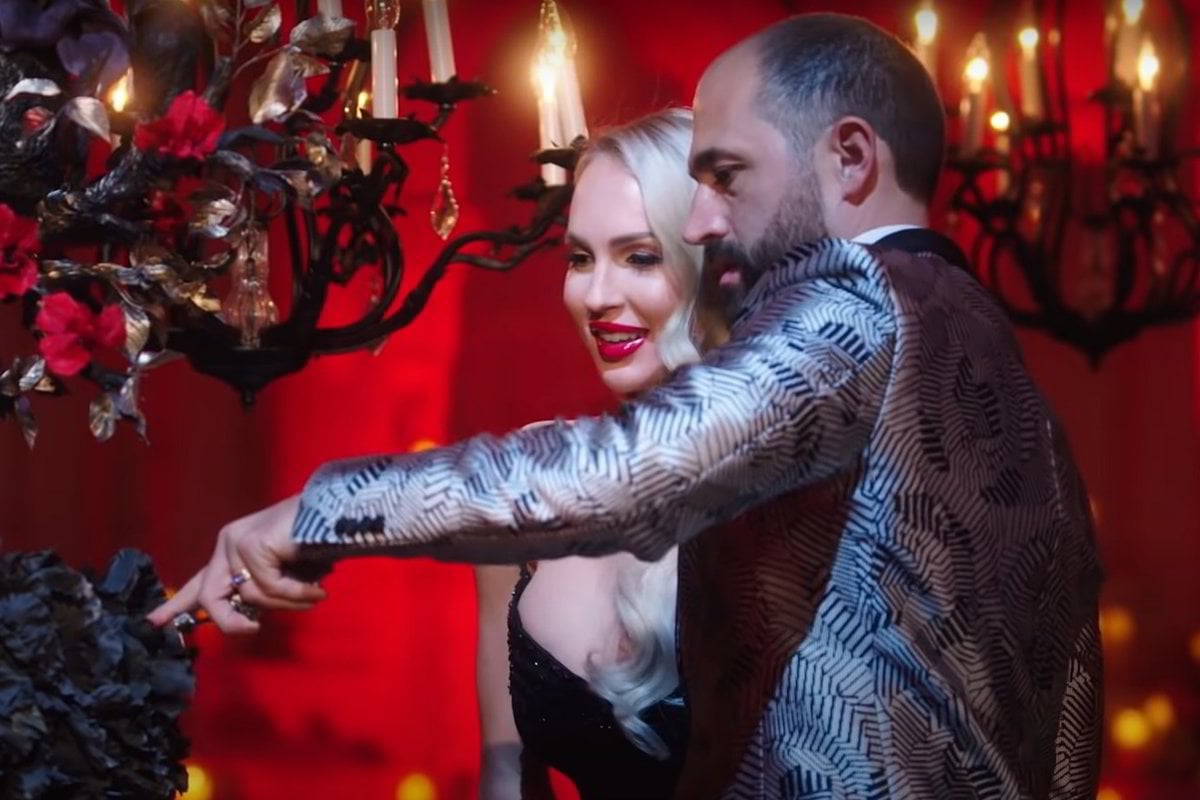 Warning: This post contains A LOT of spoilers for Selling Sunset Season 3. You have been warned.

For those that have binge-watched ﻿Selling Sunset﻿, you'll know that the reality show is entirely over-the-top.

From enormous multi-million dollar listings in the Hollywood Hills to the lives of the glamorous real estate agents selling them, the Netflix show depicts a lifestyle that most of us can only imagine.

But when it comes to the over-the-top lavishness of the show, there's virtually nothing that will beat the extravagance of Christine Quinn's gothic wedding.

The wedding, which appeared in season three of the reality show, featured live black swans, ice sculptures, fake snow, and even a bleeding cake.

And that's just the beginning of it all.

In season two of Selling Sunset, Christine returns to the office from her overseas holiday with the news that she's engaged to a man named Christian Richard.

Speaking to ﻿Refinery29﻿, Christine, 31, shared how their relationship began.

At their engagement party, which aired in season two, Christian opened up more about their first meeting.

"Christine, I met you in Beverly Hills not even a year ago, and I absolutely fell head over heels in love with you," he said.

"We had dinner, she was wearing this red dress, and we hit it off in the car. We had instant banter which is really special, you don’t get that too often. I pursued her, and she’s a tough catch. But here we are now, she’s amazing, complements me perfectly, and we’re building a life together."

Just a few months into their relationship, Christine began showing Christian houses in the Hollywood Hills.

After showing him a few of her listings, Christian purchased a $5 million four-bedroom, six-bathroom property, which earned Christine a $150,000 commission.

"I would sit in that open house every Sunday and would picture myself sitting in that house, getting coffee with my husband, and I now live in the house that I envisioned myself living in," Christine said.

In case you missed it on the show, Christian is actually retired.

The 41-year-old, who previously worked as a software engineer, is rumoured to have a net worth of $20 million.

"Christian is big in the tech world," Christine said on Selling Sunset.

"He went to MIT, and he’s a software engineer and has worked for multiple companies, multiple development projects. And he’s retired."

After holding their engagement party, which involved fire dancing performers and even a live zebra, the couple began planning their wedding.

On December 15, 2019, the couple married at a downtown Los Angeles cathedral in an extravagant "gothic winter wonderland-themed wedding".

The wedding, which was attended by 75 guests and planned in just two months, had no budget.

Speaking to The Oprah Magazine, event planner Lisa Lafferty estimated that the wedding cost "over a million dollars".

"She said, 'The budget’s love.' They were very generous with their budget," Lafferty explained.

"It was absolutely over a million dollar wedding. We did everything custom and couture for her, because her style is kind of wild. We were able to take risks."

For the event, Christine had two black gowns designed by Galia Lahav. She also wore red Louboutin heels signed by Christian Louboutin, as well as a black veil.

"She wanted to be different," Lafferty shared.

"She's always stood out. She wanted to be an individual and not go to the standard white wedding dress."

The two dresses are rumoured to have cost a mind-boggling $50,000.

"I never conformed to the status quo or societal expectations," Christine told PEOPLE of foregoing white.

"I’ve always enjoyed being bold, different and trendsetting. I’ve always wanted to get married in a black wedding dress, and I’m so happy that my dream came true."

As for the decor, the couple were married in a winter wonderland-themed cathedral, complete with falling snow, which was then transformed into a gothic black and red theme.

The transformation took 90 minutes for the 100 workers to complete.

For the reception, Christine and Christian sat on huge thrones while cocktails called 'The JFK' and 'The Marilyn' were served. Upon entering the reception, faux thunder filled the room.

The wedding was filmed for Selling Sunset, which Christian wasn't entirely comfortable with.

"After we got back to LA, we got picked up for another season and I asked him, 'Do you want to be on it?' He said, 'Oh my gosh, this is so not me.' He’s really, really shy, but decided to do it for me," Christine told Refinery 29.

"He’s on the show quite a bit and, bless his heart, he tries, but [filming] is a really awkward thing. It’s not organic in any way. It’s not reality in any way."

But after the wedding episode aired, Christine admitted that she was "disappointed" by how her wedding was shown.

"I was a little disappointed. It just didn't really showcase the way that it was," she told PEOPLE.

"The wedding was the best day of my life and it was hard for me to watch it on the television show because that's not really the way that I remember it," she continued.

"I understand they wanted to get certain storylines in there, but this was actually my day. This was my day, and I was just disappointed in the way it was perceived on camera and translated, unfortunately. I'm not going to lie, I was crying when I watched it. I was like, 'This is not my wedding, this is not my wedding.'"

The 31-year-old shared that she was upset that her vows and other small details throughout the wedding weren't featured on the show.

"We had these huge LED screens that were gorgeous, projecting snow and rain and [playing] thunder, and all these fabulous things. It was just a whole theatrical performance."

Since the episode aired, the real estate agent has also admitted﻿ that she may have had coronavirus at the wedding.

"I was really, really sick on my wedding day. I actually had what I now know is corona," Christine said on Goss.ie’s Goss Chats. ﻿

"I got really sick in late December and we were travelling, and I was sick for about a month when we were filming. I couldn’t even have a bachelorette party. I was so bummed about that because I was so sick."