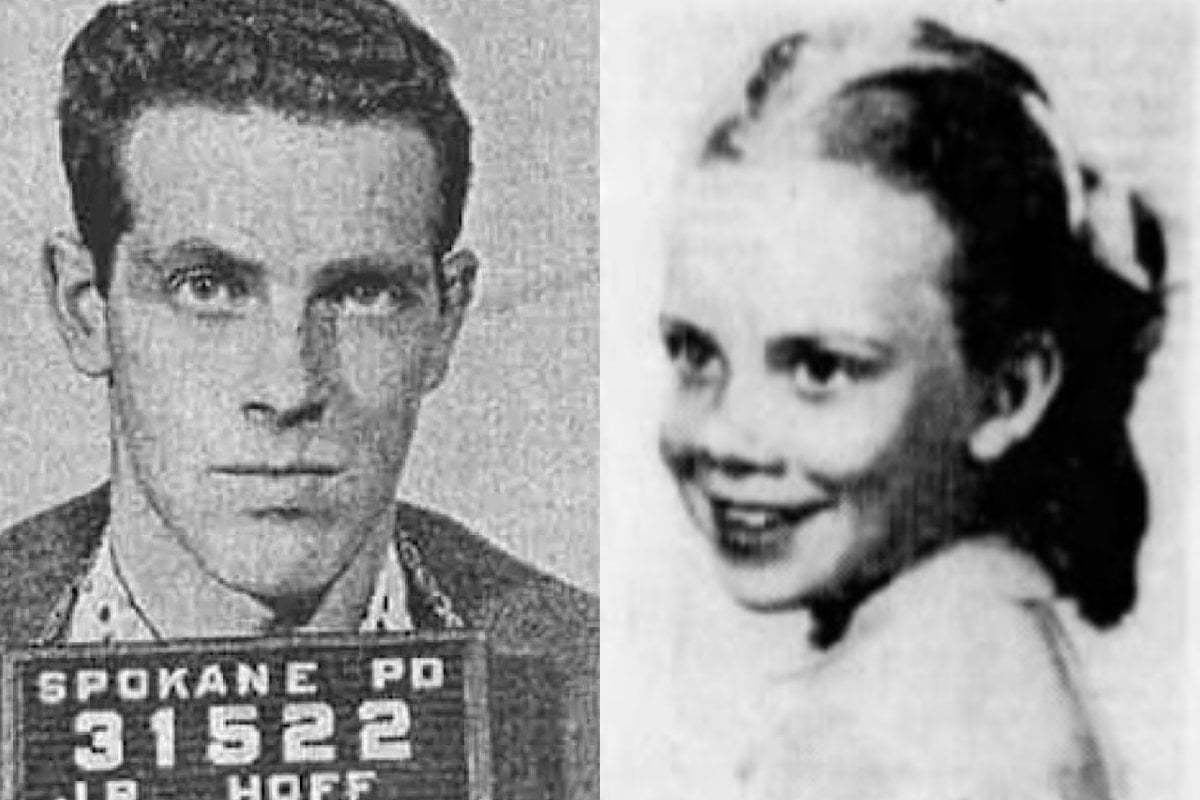 This post deals with assault, violence and suicide, and could be triggering for some readers.

It was one of those crimes that changed a city forever.

On March 6, 1959, nine-year-old Candy Rogers was going door-to-door in her neighbourhood in Spokane, Washington. She was a member of the Blue Birds, the younger version of Camp Fire Girls, and she was selling boxes of mint patties as a fundraiser.

Candy was supposed to be home by dark, but she never arrived.

Six boxes of mint patties were found scattered along a street.

Watch True Crime Conversations, where each week, host Jessie Stephens will sit down to talk to an expert about crimes that have captivated, confused and kept us guessing. Post continues after video.

Police were called, and soon, officers were out searching, along with volunteers. At one point, 1200 people were looking for Candy. The Air Force offered a helicopter to help in the search. Tragically, the helicopter crashed, killing two of the airmen inside.

Sixteen days after Candy disappeared, two men hunting in the woods discovered a pair of girls’ blue suede shoes. Wondering if they could belong to Candy, they reported the find to police.

The next morning, at dawn, police arrived at the spot in the woods and almost immediately spotted Candy’s body under a shallow layer of branches and pine needles.

She had been sexually assaulted and strangled with her own clothing.

“We’ll put every available man on the case and keep them there 'till the thing is solved,” Police Chief Clifford Payne told The Daily Chronicle at the time. “We know what we’re looking for now. We’re looking for a maniac.”

The police followed thousands of tips and leads, and came up with suspects – including serial killer Hugh Bion Morse, who chewed the same flavour of gum that was found smeared on Candy’s coat – but they never charged anyone with the crime. They carefully stored all the evidence, including Candy’s clothes, hoping that one day, it would help find the killer.

“It really changed the way Spokane worked back then and how children were allowed to run free or not,” Spokane Police Detective Brian Hammond said.

For decades, police continued investigating. As detectives retired, they would hand the case down to the next generation, begging them not to give up.

Candy’s father, Carl, took his own life four years after Candy disappeared. Her mother, Elaine, a schoolteacher, lived till 2006, never knowing who killed her daughter.

As investigation methods improved, a DNA sample was taken from bodily fluids on Candy’s clothes. But no match was found in a federal database of criminals.

In 2018, with the 60th anniversary of Candy’s death approaching, her relatives were still hoping for the case to be solved. Her cousin, Penny Melcher, who was a teenager at the time of the death, cried as she spoke to KHQ.

“The shock goes so deep that you can only start to deal with it in bits and pieces," Penny said. "She was very, very pretty and so nice.”

It took until this year for a breakthrough to come, when investigators used a genealogy database to match the DNA found on the clothing to three brothers, the Hoffs.

One of those brothers, John Reigh Hoff, had died by suicide in 1970. But he had a daughter, Cathie. As soon as Cathie heard her father was a murder suspect, she offered her DNA for testing.

SPD detectives have solved a cold case murder from 1959. The killing of Candy Rogers, a 9 year old out selling campfire mints, rocked the Spokane community. Join us for a press conference on the case tomorrow - Fri. Nov. 19th - at 10am livestreamed on Facebook. pic.twitter.com/E8ltrVlMLW

When Candy went missing, Hoff was a 20-year-old soldier who lived just over a kilometre from Candy’s house. His 10-year-old sister was Candy’s “big sister” in the Camp Fire Girls.

Although Hoff was never a suspect in Candy’s murder, he was convicted of assault two years later after tying up a woman with her own clothes and strangling her. Luckily, the woman survived. Hoff spent six months in jail for the crime and was kicked out of the army. He ended up working as a door-to-door salesman.

Last Friday, Spokane police made the announcement they’d been waiting 62 years to make.

“I keep saying it’s the Mount Everest of our cold cases, the one that we could never seem to overcome,” Detective Zac Storment told a news conference. “But at the same time, nobody ever forgot.”

Cathie, who was a young girl when her father died, spoke in a video played at the news conference. She said she’d always believed her father took his own life because he was suffering from depression.

In the video, Cathie said she was “very, very sorry” for what her father did.

A relative of Candy, identified only as Cheryl, also spoke at the press conference.

If this post brought up any issues for you, you can contact the PartnerSPEAK website and peer support forum here. Contact the PartnerSPEAK Peerline: 1300 590 589 (Please check website for hours) All peer support is offered by fully trained individuals with the lived experience of having an intimate partner or close family member involved in child sexual abuse material.