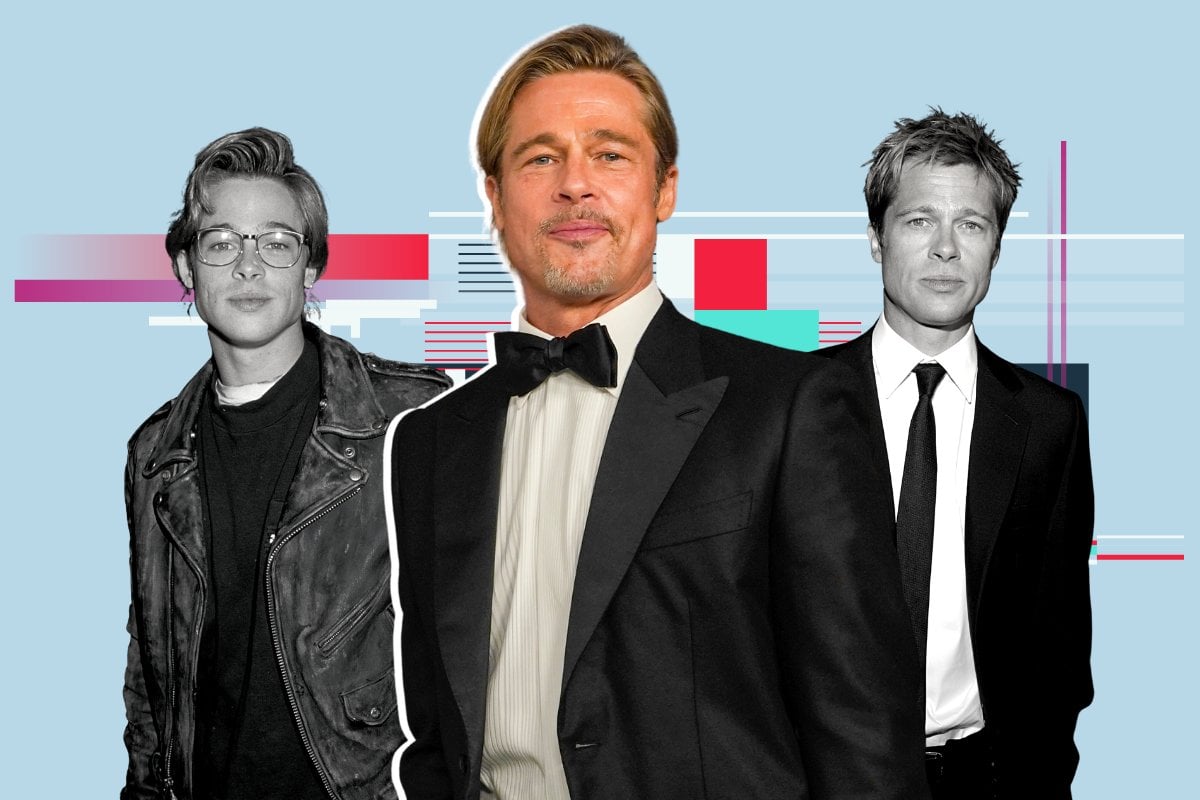 There is an aura about Brad Pitt.

He's been around for decades: as an actor, as a celebrity and as many people's ultimate hall pass.

The world has followed him from his beginnings in Thelma & Louise, to his 2020 Best Supporting Actor Academy Award for Once Upon A Time In Hollywood, and all the cinematic success in between. He's an incredibly talented actor, and is a pretty safe bet for those making the film industry's financial decisions.

Fans, and tabloids, have watched his personal life play out with interest too: from his early relationships with co-stars like Juliette Lewis to his matching haircut with then-fiance Gwyneth Paltrow. 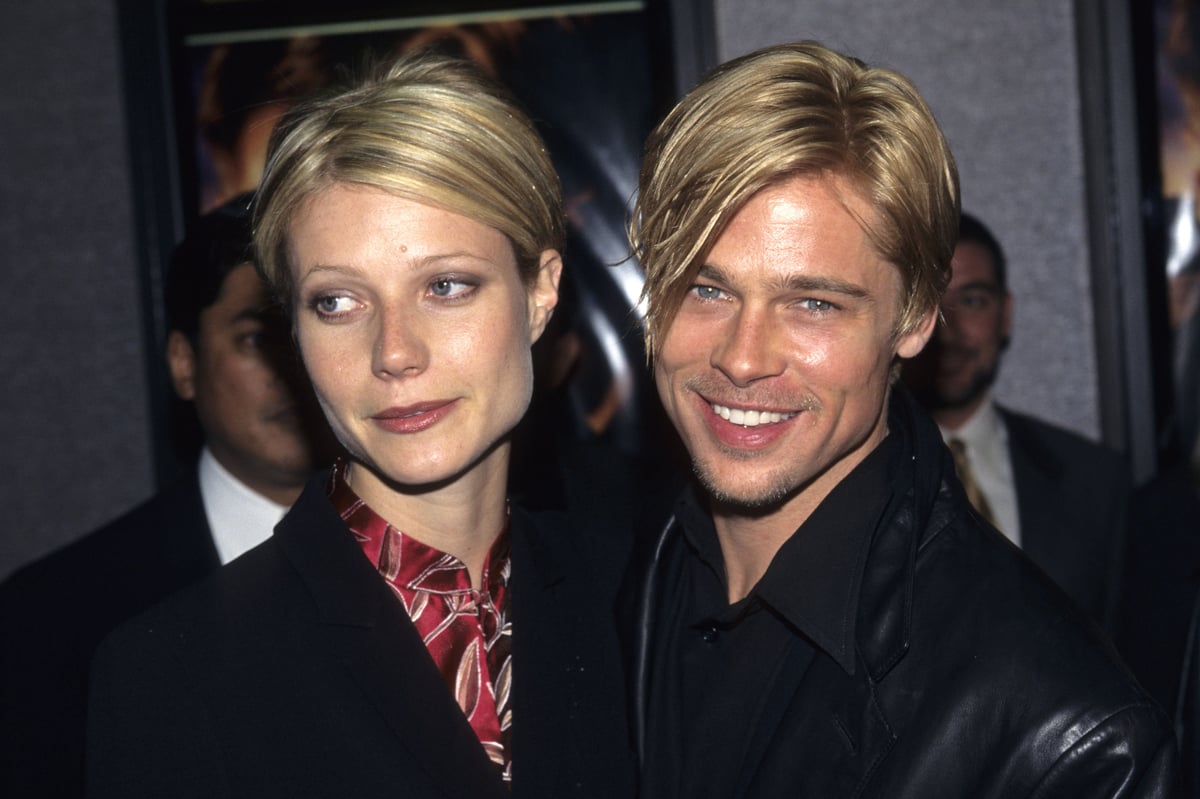 Hollywood found its fairytale relationship when Pitt married Jennifer Aniston in 2000, and the entire world watched on in shock when he has spotted playing happy families with Angelina Jolie and her son, Maddox, just one month after Aniston filed for divorce in 2005.

When he and Jolie's relationship deteriorated more than a decade later, with six children involved, things became messy: but in order to know what's going on, you need to do a bit of digging.

Listen: Mamamia's daily entertainment podcast The Spill on the conversation we're finally having about Brad Pitt. Post continues below audio.

The headlines covering the divorce and custody proceedings have been telling: 'Angelina claims', 'Angelina does this', 'Angelina does that'. The onus is always on Jolie, and most articles contain 'anonymous sources close to Pitt' who portray her as manipulative and vindictive.

In 2019, as he waged a (successful) Oscar campaign, Pitt gave 'redemption' interviews, discussed his destructive relationship with alcohol and gave self-deprecating acceptance speeches at award shows. He leaned into some of the messiness, in a meticulously planned way.

We don't actually know the truth about what happened between Pitt, 57, and Jolie, 46, but the difference in PR - probably arranged by savvy reps but also down to the power and reputation Pitt carries - has undoubtedly shaped the coverage of their relationship breakdown.

In a sense, Pitt feels untouchable.

He's faced - and successfully weathered - many scandals in a way that no other celebrity could. 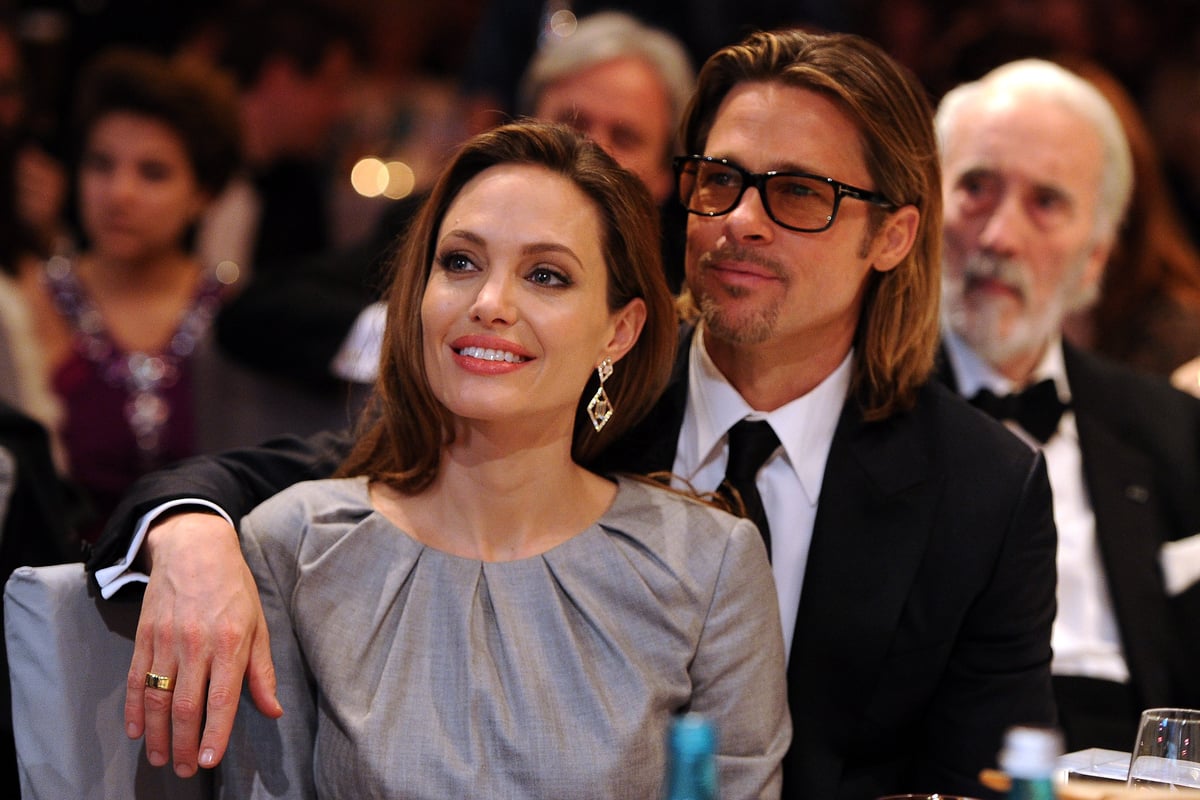 There was, of course, the personal drama of the mid-2000s, when he left America's sweetheart Jennifer Aniston for the edgier, more controversial Angelina Jolie.

Pitt was married to Aniston when he and Jolie filmed Mr. & Mrs. Smith, and while no one has ever publically admitted it, the established timeline suggests that Pitt must have had an affair.

Jolie has long been painted with the 'home-wrecker' brush over this. She's the overly sexualised woman who stole the woman next door's husband, while Pitt has remained the golden boy who, decades on, people are hoping will get back together with the ex-wife he cheated on.

That relationship plays into two other major question marks floating over Pitt: first, allegations of violence brought up in divorce proceedings and the ongoing custody battle between himself and Jolie.

And secondly, his crusade against Harvey Weinstein, which doesn't appear as heroic as we've been led to believe.

In a September 2021 interview with The Guardian, Jolie, 46, spoke about how she feared for the safety of her children during her marriage to Pitt. She has also alleged incidents of domestic violence in court documents. 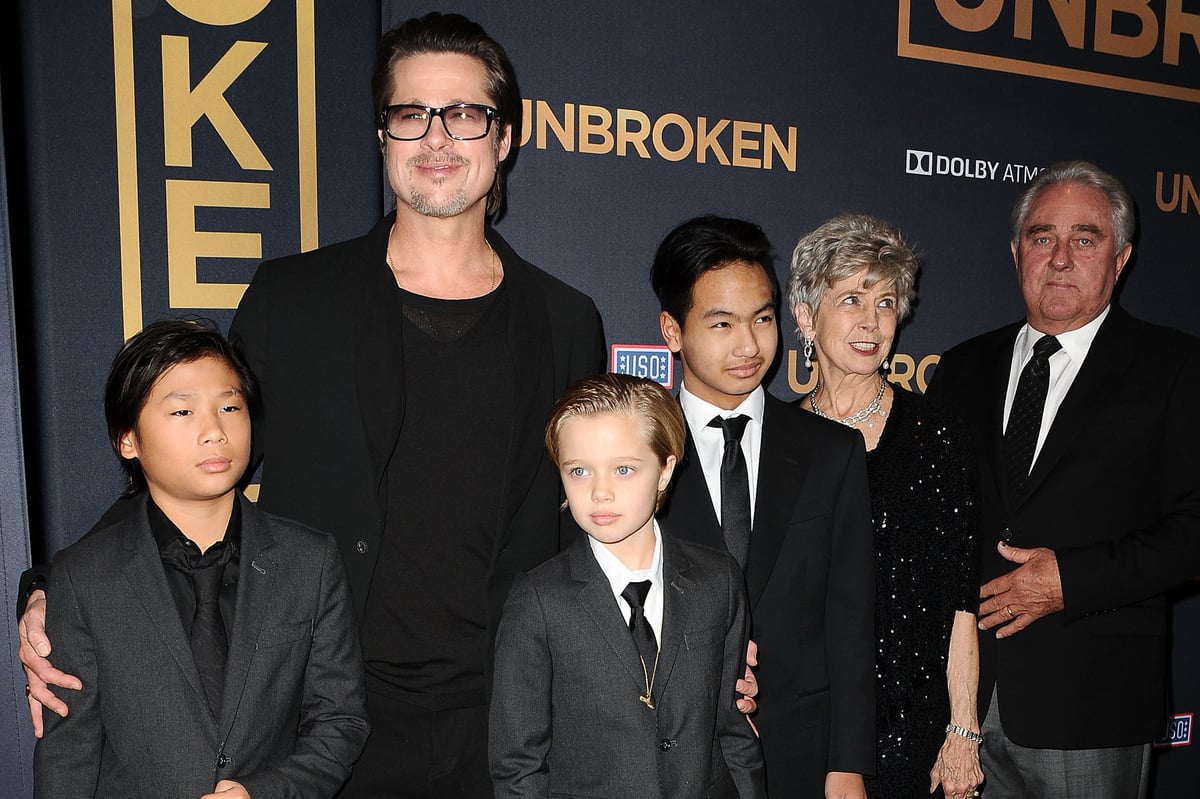 Pitt, with children Pax, Shiloh and Maddox, and his parents in 2014. Image: Getty.

In 2016, Jolie sought a divorce days after a disagreement broke out on a private flight ferrying the actors and their children from France to Los Angeles.

Pitt, 57, was accused of being abusive toward then-15-year-old Maddox during the flight, but investigations by child welfare officials and the FBI were closed with no charges being filed.

Asked whether she feared for the safety of her own children, she replied: "Yes, for my family. My whole family."

"It doesn't start with the violation [the plane incident]. It's so much more complicated than that," she said.

In another part of the interview, Jolie discussed an interaction she had with Weinstein when she was 21 years old. She starred in Miramax film Playing By Heart, which the convicted rapist executive produced.

She said she'd long downplayed an assault because she felt she'd 'escaped' it.

"If you get yourself out of the room, you think he attempted but didn't, right? The truth is that the attempt and the experience of the attempt is an assault."

After that, Jolie boycotted Weinstein's work and said she warned people about him.

"I remember telling Jonny [Lee Miller], my first husband, who was great about it, to spread the word to other guys – don't let girls go alone with him. I was asked to do The Aviator, but I said no because he was involved. I never associated or worked with him again. It was hard for me when Brad did." 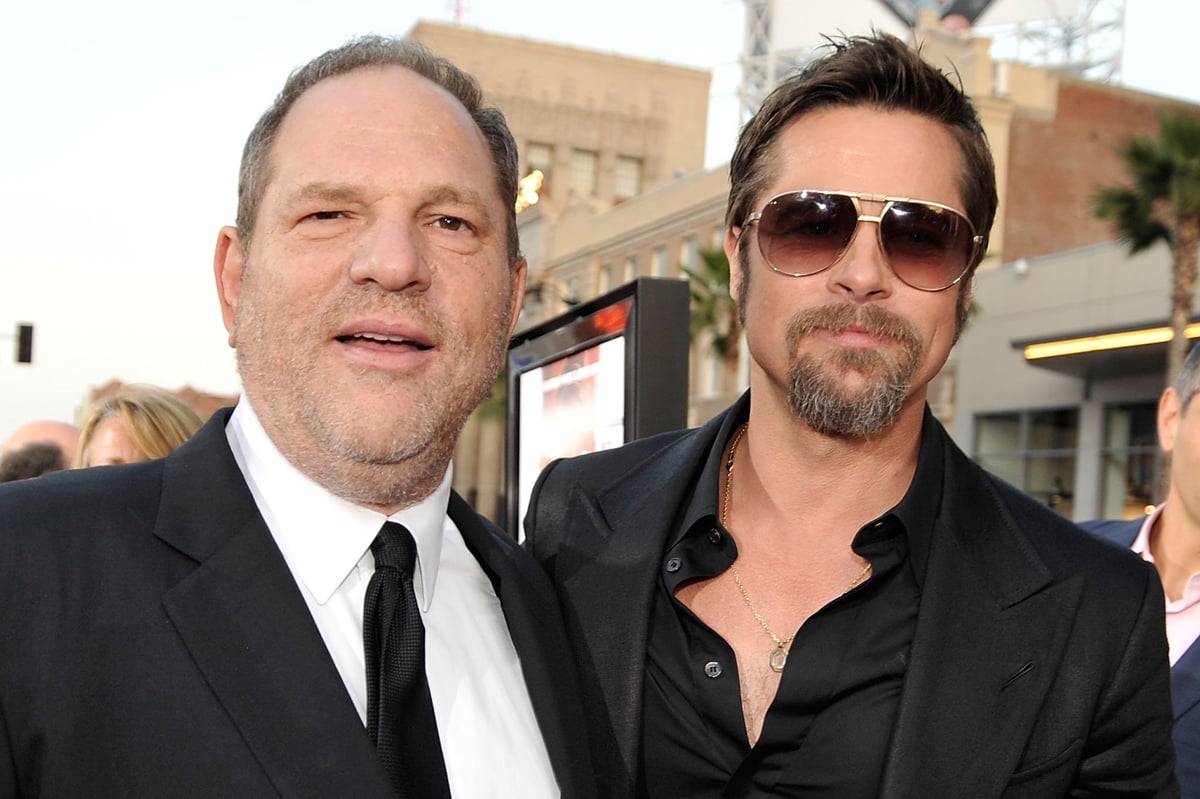 Jolie said she felt like these decisions minimised her experience: "We fought about it. Of course it hurt," she said (and it draws parallels with a 2006 Aniston quote, in which she said Pitt was missing "a sensitivity chip").

There are a few caveats to this conversation: it's impossible to overestimate the power that Weinstein had in Hollywood at this time. He was the most important person in any room, and he was in many rooms. It would be hard to find an actor from this period that didn't have a Weinstein connection; such was his influence and reach. But there are details that make Pitt's relationship with Weinstein worth dissecting further.

There is the oft-told story about Pitt, Gwyneth Paltrow and Weinstein. Paltrow explained it to Howard Stern in 2018, saying Pitt "energetically" confronted the now-disgraced film producer 26 years ago, after he cornered her in a hotel room, placed his hands on her and suggested they head to the bedroom for massages.

"[Weinstein] made a pass at me. I was alone in a room with him… It was out of the blue… I was blindsided," she said, adding she told Pitt right away.

When Pitt spotted Weinstein at the 1995 opening night of Hamlet on Broadway, he stepped in.

"Harvey was there, and Brad Pitt — it was like the equivalent of throwing him against the wall, energetically," Paltrow said. "He came back and told me exactly what he said. He said, 'If you ever make her feel uncomfortable again, I'll kill you.' Or something like that."

Paltrow said she loved Pitt for his actions that evening.

"It was so fantastic. He leveraged his fame and power to protect me at a time when I didn't have fame or power yet."

This means Pitt knew about Weinstein's actions as far back as 1995. He confronted the producer over his actions against one of his partners and later learned Weinstein had attempted to assault another.

But years later, he had clearly moved past it - or at least opted to turn a blind eye. He had small parts in two 2002 Weinstein films, Full Frontal and Confessions of a Dangerous Mind, and Jolie said his decision to work with Weinstein again during their marriage caused problems.

Right now, Pitt is working as an executive producer on She Said, a movie based on a Weinstein exposé.

Beyond a couple of rogue Twitter accounts, there has barely been a peep about the hypocrisy of this. 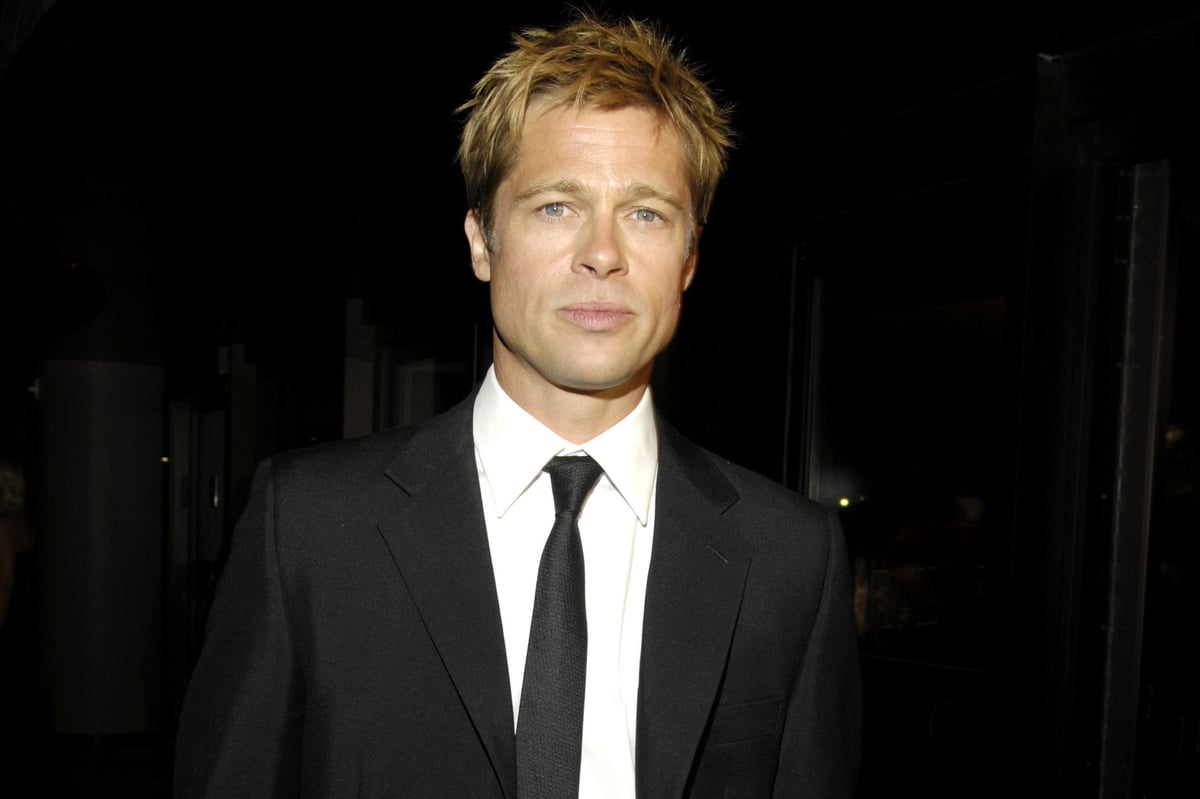 These are strange times, and I don't think it's unreasonable to assume that someone else with similar alleged indiscretions would create more of an uproar.

Justin Timberlake felt compelled to apologise for building a career upon the backs of women like Britney Spears and Janet Jackson earlier in 2021, after facing days of criticism from the #FreeBritney movement. Pitt's friend Matt Damon had to backtrack significantly after asserting that he only recently stopped using a homophobic slur when his daughter told him off at dinner.

These are different circumstances, but they speak to the culture of right now.

So, why not Pitt? How has this man avoided falling into so many of the traps his peers would never have been able to avoid?

Pitt has built up his reputation as a 'stand-up guy' over decades, and he's been adored by the industry and the public the entire time. 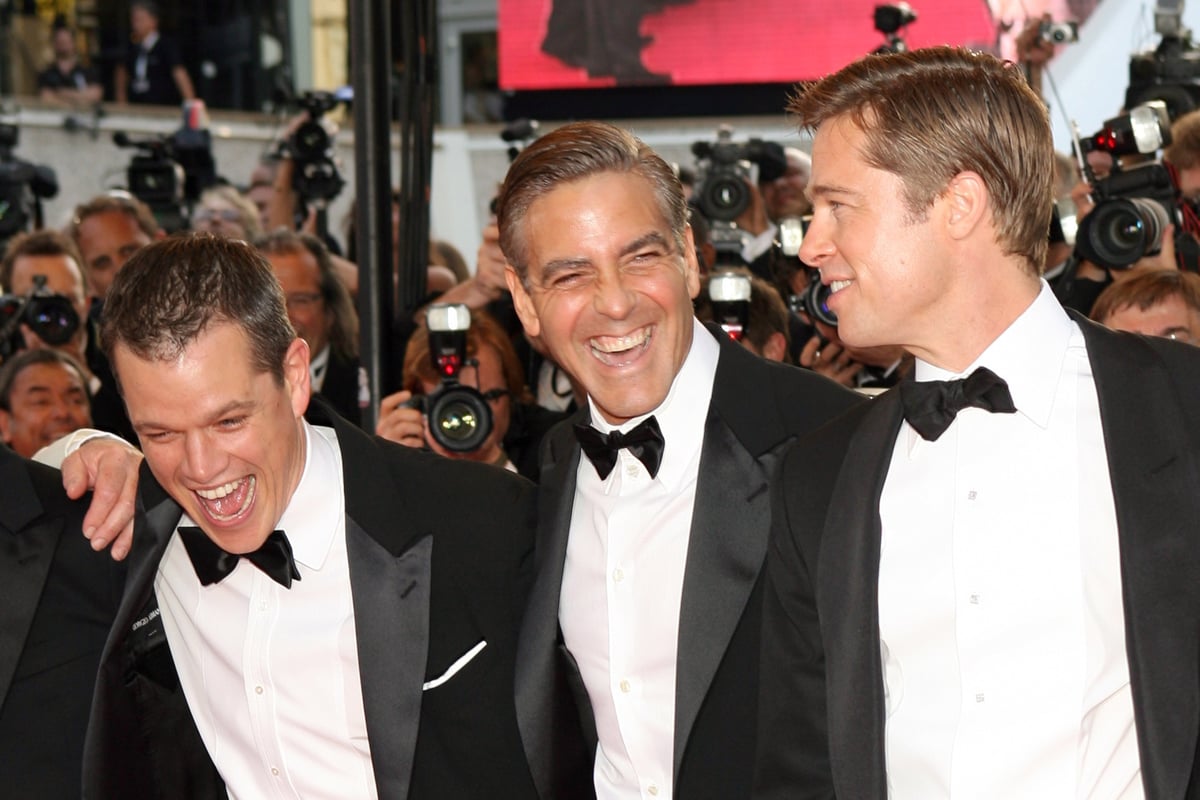 He's straddled the line between earnest and easy-going. He's associated with a group of other successful, well-liked actors like George Clooney and Leonardo DiCaprio. He's friendly with several exes. It's obviously helpful that he's a very good-looking, straight white guy.

That reputation puts him among the most powerful in Hollywood. Right now, it's Pitt  - the loveable, butter-wouldn't-melt man with the smoulder - vs Jolie - the manipulative home-wrecker long seen as an outsider. There's a power imbalance here, and it's all in the public perception.

Pitt is forever the boy next door.

But to have that conversation, it would mean unpacking our enduring love of Brad Pitt. Are we finally ready to do that?

P
Pop 4 months ago
Reply
Upvote
Just wondering why the author didn't touch on Pitt's habit of dating much younger women? This is surely relevant when questioning a man's character, as this article does.  Juliette Lewis, 17, Brad Pitt, 27. Gwyneth Paltrow, 22, Brad Pitt, 31. Angelina Jolie, 30, Brad Pitt, 41.
M
maya 4 months ago
Reply
Upvote
3 upvotes
Hmmm, are you looking for scandal where there isn't?  I don't think Brad is unscathed because he has been publicly accused of domestic violence - whether true or not, some mud always sticks.  I think Angelina has done the wrong thing airing their dirty laundry in public when there are children involved.  Let the legal system sort it out.  I would hardly call Jennifer Aniston 'the woman next door' .  At the time of their split up one reason Brad was quoted was he wanted children and Jennifer didn't as she wanted to move forward with her career.  It may be that Angelina had nothing to do with it?  It's no one's business but theirs. Unfortunately, since the beginning of time the 'other woman' is always accused of 'stealing' the husband, as though a husband is a brainless object.  She could never win that one and it's the public's attitude that needs to change, not any of the players.  As for him being seen with her a month after the divorce, where have you been living?  Everyone in Hollywood bed hops as soon as the ink is dry on the divorce papers - he did nothing new.  If you are going to accuse Brad of doing the wrong thing by working with the Weinstein creep, then you better start taking down the rest of Hollywood!
C
cat 4 months ago
Reply
Upvote
@maya telling people not to "air dirty laundry" only helps abusers silence their victims.
Angelina didn't even make the domestic violence claims publicly, the media are getting them from court filings.