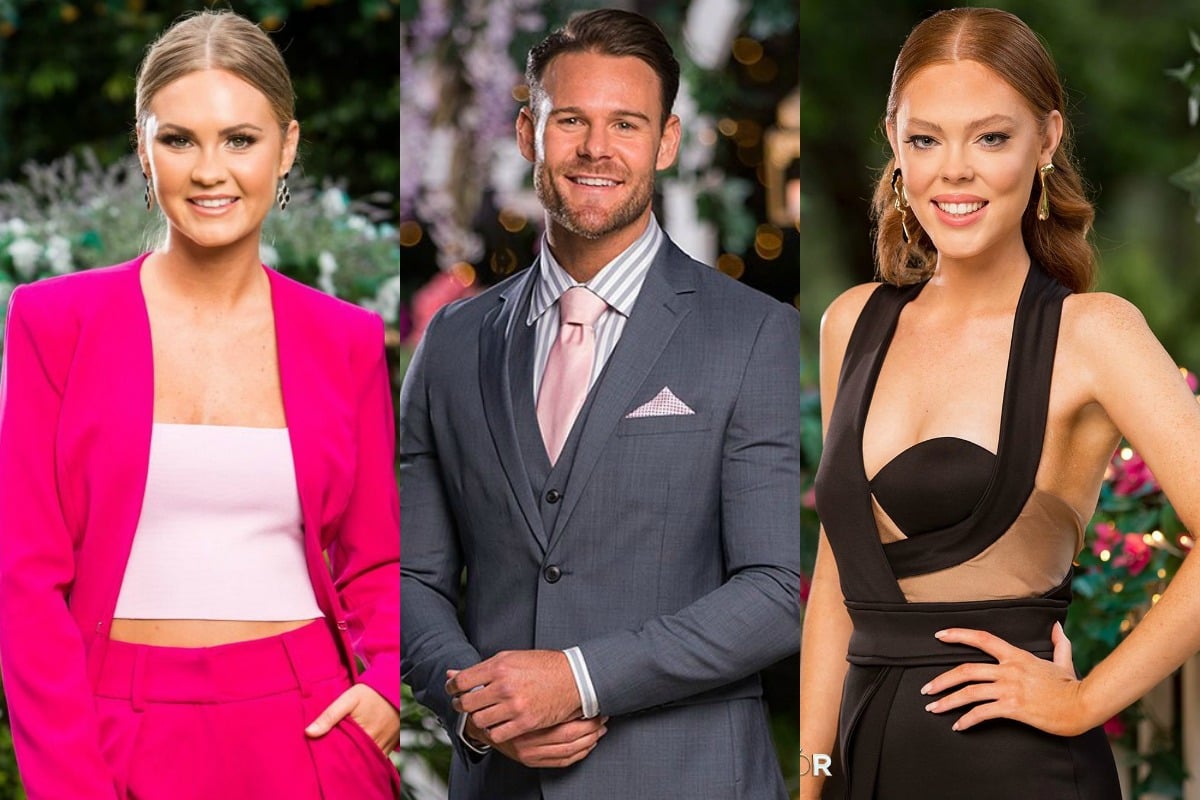 The Bachelor hasn't even finished yet but we're already finding ourselves dreaming of mango daiquiris and drama filled bulla banquets because, frankly; we miss Bachelor in Paradise.

And while we still have to wait awhile to see Osher back in a Hawaiian shirt, rumours about the next season's contestants are coming in thick and fast.

According to The Wash, big names from previous seasons have already been approached for 2021.

Noosa has also been discussed as a potential filming location due to COVID-19 travel restrictions, an inside source told the publication.

And thanks to the So Dramatic! podcast we may know which of our favourites are heading back to Paradise.

Earlier this week, podcast host Megan Pustetto, explained that a bunch of girls from the current season of The Bachelor have already expressed interest to the show's producers, including Zoe-Clare, Juliette and Roxi.

A few familiar faces are also rumoured to be joining the cast, including Renee Barrett from last season.

According to Megan, past winners Chelsie McLeod and Carlin Sterritt may also be heading into Paradise.

And it seems Jamie Doran had something to do with it.

In the podcast, Megan explained that Jamie told her that he was the one who got Chelsie onto the show.

"He told me quote, 'I set it up. I'm good mates with Chelsie and I asked her at a party and she said yes. So I called Channel 10 on her behalf and told them that she was keen.'"

In more evidence, Chelsie shared a post on Facebook asking if anyone would be interested in renting out her apartment for a few months later this year.

"We all know that Paradise if filmed for about four weeks over November and December but keep in mind she will have to quarantine before and after so add that in and the time period matches up perfectly."

Coincidence? We think not.

But just so you're across everything, here are all the rumoured, definitely-not-coming and confirmed contestants joining Bachelor in Paradise 2021.

Yes, the girl that famously defended the rights of Gingers on the first cocktail party of Locky's season of The Bachelor. According to Megan Pustetto and the So Dramatic! podcast, Zoe Clare has expressed interest in appearing on Bachelor in Paradise.

On her original interview on 10play before entering The Bachelor mansion, Zoe Clare mentioned that she was on the hunt for a guy who is, "loving, intelligent, tall, with pretty eyes and handsome". Fingers crossed there's a fella that fits that bill in Paradise!

YES, the resident uberly-glamourous pot-stirrer Juliette may be donning her best bikini on the next series of Bachelor in Paradise, and we are rather excited about this!

...Those who are tracking this season of The Bachelor will have put two and two together and realised that rumours floating around Juliette appearing on BIP probably means that she doesn't win Locky's heart. But, those who have been reading every Bachelor spoilers post on Mamamia will also know the two girls that definitely m﻿﻿ake it to the final, and that Juliette isn't one of them.

According the So Dramatic! podcast, Juliette has expressed interest in appearing on the next season, but she is yet to confirm anything herself publicly.

The winner of Matt Agnew's season of The Bachelor, Chelsie McLeod, has been single since her bachelor boy called it quits. But it seems she may be ready to date again as evidence is gathering that she's a shoe-in for the next season of Bachelor in Paradise.

Due to posting about renting her room out during the time that BIP is set to film, along with the So Dramatic! podcast in tandem with Jamie Doran confirming the rumours, we're pretty damn convinced that she's heading straight for Paradise.

Our favourite slightly-snobby Princess in The Bachelor mansion may have missed out on scoring Locky's heart, but is rumoured to be giving love another shot on Bachelor in Paradise (according to the So Dramatic! podcast).

We can only DREAM of the all-over-sequined swimmers she's bound to wear in Paradise.

PENGUINS IN PARADISE?! We sure hope so.

On her original interview with 10play before entering The Bachelor mansion, Rosemary mentioned that her only relationship deal breaker was if the guy was into coriander. So the bar is low for future dudes of Paradise to get a rose from Rosemary.

Well I guess this penguin is out of the zoo! Tune into @thebachelorau on @channel10au this Wednesday at 7:30pm for your front row seat to watch my wild adventure to find love! 🐧❤️🌹 #TheBachelorAU #nootnoot

Following his rather public breakup with his Bachelorette Angie Kent, rumours are cropping up that Carlin Sterritt may be returning to our screens to try his luck in Paradise.

Megan Pustetto briefly mentioned it in her recent So Dramatic! podcast and so far Carlin is yet to approve or deny the rumours.

Same same but different. Tune in to watch Marlin with a C continue to take a chance at love! @bacheloretteau @channel10au

Wartime Bel, who was brutally dumped via Zoom, may be making a comeback and rocking up on the shores of Paradise, after the So Dramatic! revealed that Bel was interested in appearing on the show.

T-minus 4 hours till Love In Lockdown! Tonight on @channel10au #TheBachelorAu

Rhonda coming back for round two? APPARENTLY SO!

Yes, the probably quite misunderstood and definitely rather feisty Roxi is rumoured to be heading to Bachelor in Paradise. Well, at least according to the So Dramatic! podcast.

Remembered as the rather confident British dude from Ali Oetjen's season of The Bachelorette, Paddy Colliar is rumoured to be returning to Paradise after his short stint on season two of the show.

Renee found love in the last season of Bachelor in Paradise with Matt Wyatt, but things fizzled quickly after leaving Fiji. So, she may be coming back for round two!

Again, she's not confirmed this herself, but she was mentioned on the So Dramatic! podcast line up of potentials heading to Paradise.

This experience was nothing short of amazing and I’m so grateful for the amazing friends I’ve made. Unfortunately @mattwhyatt and I are no longer together. We gave it our best shot but our love for each other wasn’t able to transition from Paradise to the real world. I respect Matt and hope that you respect my privacy and understand that I won’t be going into any details. Matt and I remain friends (not all ex’s have to hate each other) and I wish him and his new partner nothing but happiness! I wanted so badly for this to be my forever and I’m sorry if I’ve disappointed you all, I know you were rooting for me to find love. I’m so glad I’ve finally learnt how I deserve to be treated and the outpouring of love and support from Australia means the world. Let’s hope I’ve had my heart broken for the last time and I can find love again 💕 🌹 @channel10au @bachelorinparadiseau

Rumours were swirling around the return of Alex Nation to Bachelor in Paradise after she shared some cheeky comments on social media.

After Chelsie McLeod posted on Facebook that she was looking for a sublet for her bedroom for a couple of months, hype started circulating that it was because Chelsie was planning on heading off for BIP filming. This obviously peaked Alex's interests as she sent over some excitable emojis in response.

Last nights RC was hectic!! So many of you have asked for the details of what I was wearing, here it is 🌹 @amytaylorcollection // @kim_capital_l

However, when asked directly if she was planning on making a return to Paradise by the So Dramatic! podcast, Alex let the nation know that it definitely isn't on the cards. 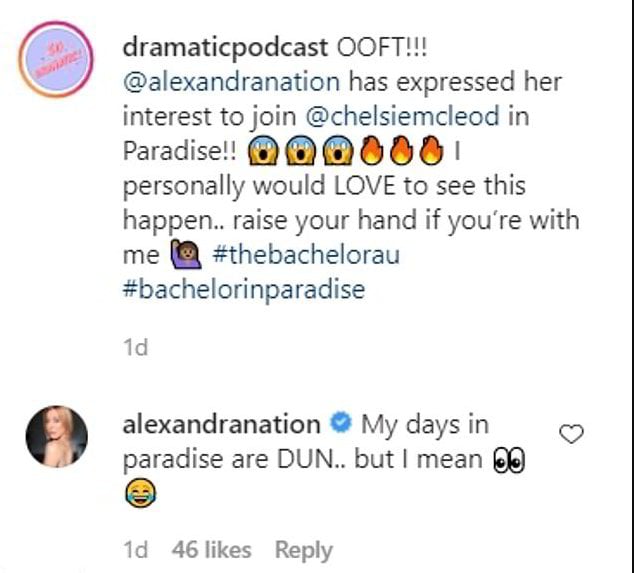 While still in the running for Locky's heart during The Bachelor 2020, it seems that Maddy is already packing her bags for Paradise as she's another contestant rumoured to be rocking up in Fiji.

When asked by 10Play what her relationship deal breakers were, Maddy had this to say:

"My deal breakers are if a guy has cheated in a past relationship, if they are full-time smokers, if they have bad hygiene or don’t have a job."

Hate to break it to you buddy, but so many of the BIP blokes are full-time reality stars so aren't your classic nine-to-five fellas.

Charley is probably best remembered as the girl who 'swore on her eyebrows' on Locky's season of The Bachelor. According to Megan Pustetto and the So Dramatic! podcast, Charley has expressed interest in appearing on Bachelor in Paradise.

On her original interview on 10play before entering The Bachelor mansion, Charley explained, "My dream date would be going to a park and having a kick around with a soccer ball, or playing some one-on-one touch football. I’d also enjoy going to the beach or doing something active".

Our bet: She has a paddle boarding make-out sesh at some point during the show.

The look I give Locky when I think he’s going to give me the MVP, but doesn’t. #unluggyuce @thebachelorau @channel10au

The lovely Leilani was on Locky's season of The Bachelor for a short time, but hopefully a good time?!

Ah, all we can hope is that she's luckier in love on Bachelor in Paradise as she's one of the rumoured contestants listed in the So Dramatic! spoilers.

Lei’d it all on the line for love ❤️🌹 Secret’s out, catch me on @TheBachelorAU this Wednesday 7.30pm on 10 #thebachelorau #thebachelor

While nothing has been confirmed just yet, we for one would love to see Litney and Abbie Chatfield return to the show.

Who do you want to see on Bachelor in Paradise 2021? Let us know in the comments.

Reply
Upvote
@mamamia-user-649450993 Well, they did initially portray him as a 'stage 5 clinger', and then he went back to them.
(On a show about people who've been on reality television, they asked them would they do it again. One guy said: they did ask me to do it again; I told them to get stuffed.)