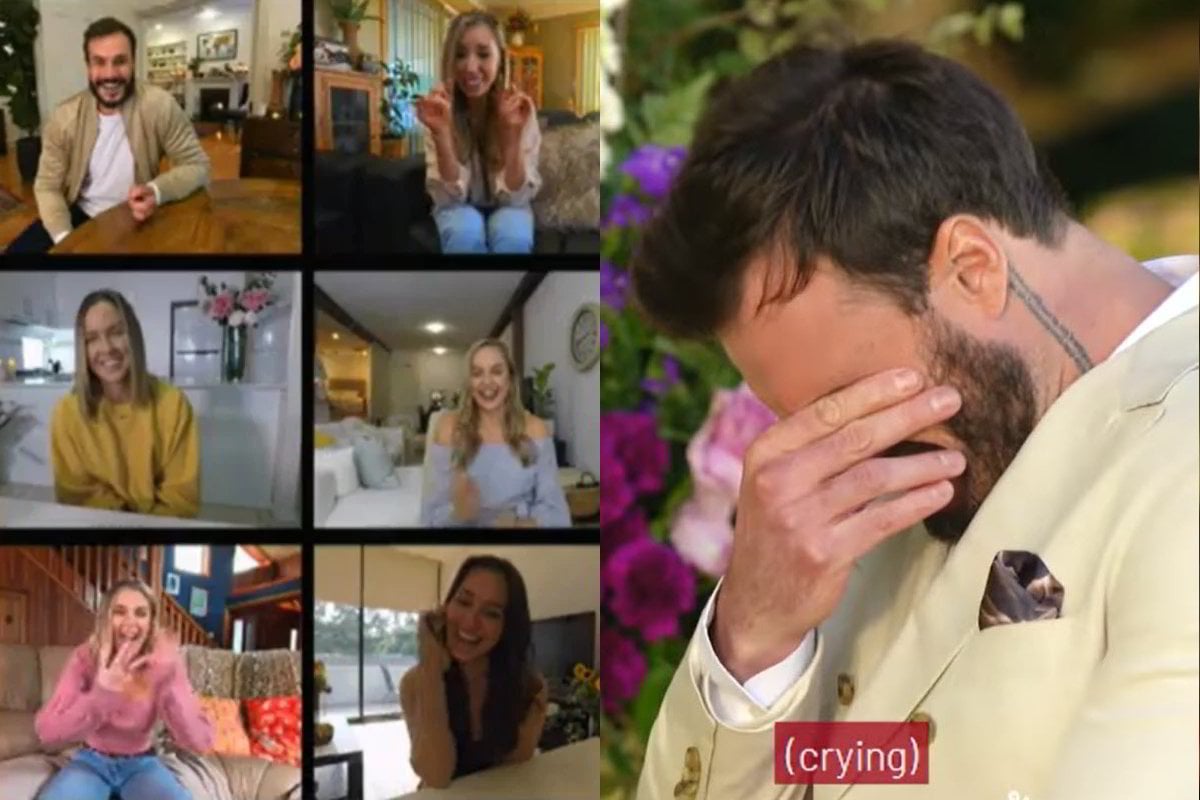 To catch up on all The Bachelor Australia 2020 recaps and gossip, check out Mamamia’s recaps and visit our ﻿Bachelor hub page﻿.

We have been living in a global pandemic for what feels like at least a decade, maybe two.

March 2020 seems a lifetime ago, but we're about to relive those initial days of COVID-19 courtesy of The Bachelor, which, yes, we are still watching for reasons that remain unclear.

Next week, we'll watch as Bach production is shutdown post-cocktail party due to the coronavirus.

"We have to stop production. We can’t keep everybody safe. You’re going to have to say goodbye to all of them tonight," Osher says to Locky, and everyone cries.

The shutdown postponed filming before eventually it kicked off again... via Zoom.

Before we watch it play out, here's everything we know about the shutdown - how it happened, what impact it had and what we can expect to see in upcoming episodes.

Remember a time before 'COVID' was the world's most used word? The good old days.

Those are the times we've been watching on The Bachelor so far.

Locky was announced as the 2020 Bach on March 4, the same week the show began filming in Sydney.

Back then, the virus had been named COVID, but it was mostly still known as 'coronavirus'. Seriously, these were simpler times.

It was that weird 'in between time', after we had watched the Diamond Princess cruise ship debacle play out off the coast of Japan and when talk of social distancing and avoiding close contact was ramping up.

But it wasn't a pandemic. Yet.

The World Health Organisation made that official on March 11.

Social distancing rules were imposed in Australia on March 21, around the same time states began to lockdown.

News that The Bachelor had suspended filming came on March 26.

At the time, Ten said it had been "employing extra precautions on set" for some time beforehand... which really doesn't explain how a MUD BATH at a cocktail party was allowed to go ahead. 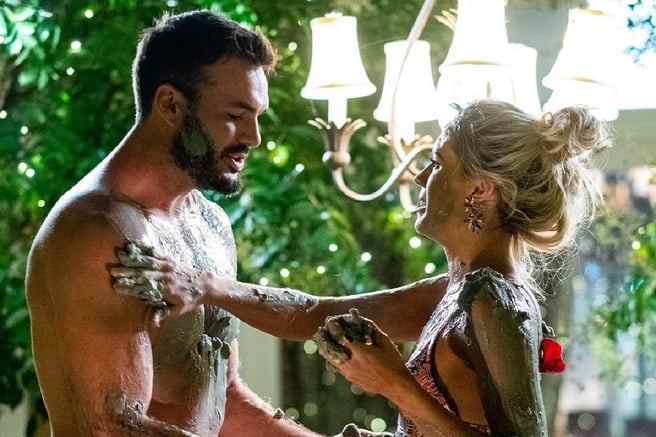 In a statement to Mamamia at the time, Network Ten said that despite employing extra precautions on set, it was "no longer practical to continue with production".

"The health and safety of our participants and crew members is our number one priority. These are extremely difficult times for all Australians and for our industry, and the full extent of those difficulties will not be known for some time to come," they said.

"Our decision to halt production was made after considering all available options. We will resume production when it is safe to do so."

Speaking to ﻿The Sunday Telegraph﻿, Osher explained the decision was made to continue the season because it would have been unfair to Locky and the rest of the women to axe it all together.

"We were pretty deep into filming and it didn't make sense to abandon the series, and we knew we had to finish it," he said.

"These people had all put their lives on the line hoping to find love and we wanted to give them that chance so we did everything we could to make that happen."

Osher also told the publication that contestants had each other's phone numbers and "were communicating all the time" while the show was being filmed during lockdown.

For the next few weeks, we will see Locky and the rest of the girls embark on a series of Zoom dates, including a virtual bath date, which already makes us feel uncomfortable.

On the bright side, this means no more cocktail parties and we might actually get to... see Locky... on a show that is supposed to be all about... him.

Accidental spoilers from promos make it look like even the hometown dates with the top four were done virtually.

By July, Ten confirmed the cast and crew had returned to filming in Oxford Falls, Sydney for its final weeks.

How will lockdown impact the show's outcome?

Speaking to Mamamia ahead of the show's premiere, 31-year-old Locky said the shutdown "sucked".

"It wasn't that we were stopping, it was that we were shutting down, so it was heartbreaking. We made all these crazy connections, and then it was just like we were done," he said.

But it ultimately ended in an outcome better than he could've imagined.

"That's where the benefits did start showing because I got to talk to them, rather than 10 minutes on a sofa with 15 other girls watching, I got to speak on the phone or video chat for an hour, two hours, three hours, four hours and no one was there to interrupt, and that was quite good because that's what a normal relationship is," Locky said.

The pandemic forced Bachelor filming to be extended by months, doubling the amount of time Locky had to get to know the women.

"I think that's what made the decision at the end so hard, because I got to know the girls so well," he explained.

Locky confirmed that yes, he is in a relationship with his final woman and yes, he is very much in love.

At the time of the interview, he was in self-isolation after returning to his home state of Western Australia.

With WA's hard border closure, Locky's probably going to be relying on Zoom for a little longer yet.