Jake Gyllenhaal has finally responded to Taylor's version of 'All Too Well', and yes, it was just as cryptic as you might have expected.

ICYMI: Back in November, Jake Gyllenhaal quickly became public enemy number one when Taylor Swift dropped 'Taylor's version' of her hit Red album, originally released in 2012 with new lyrics on one particular song: 'All Too Well'.

Alongside the new lyrics was a 10-minute version of the song and a glorious 15-minute feature film starring Stranger Things' Sadie Sink, 19, and Teen Wolf's Dylan O'Brien, 30.

Thanks to the newly added lyrics and choice casting that resembled the actor, it wasn't too hard to draw the song back to her short-lived relationship with Jake Gyllenhaal right around her 21st birthday, when he was 29-years-old. 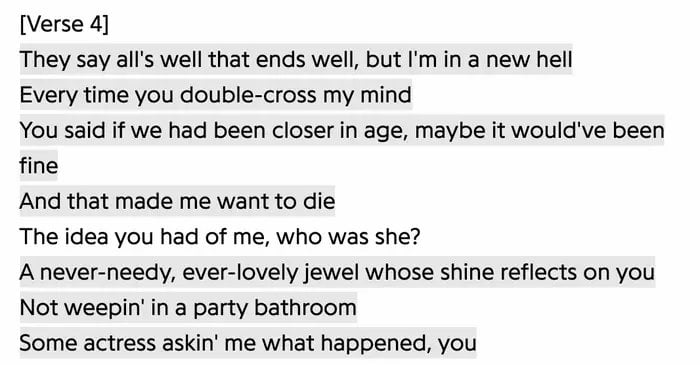 To give you an idea, here's a select passage from the ten-minute affair. Image: Genius.

At the time of release, Gyllenhaal closed comments on his Instagram and kept a relatively low profile. But now, over three months later, he's broken his silence on the whirlwind drama.

Speaking to Esquire, Gyllenhaal claimed he had not listened to the album, adding that "it has nothing to do with [him]."

"It’s about her relationship with her fans. It is her expression. Artists tap into personal experiences for inspiration, and I don’t begrudge anyone that."

He was adamant that the huge backlash didn't affect him, despite closing comments on his profile.

"At some point, I think it’s important when supporters get unruly that we feel a responsibility to have them be civil and not allow for cyberbullying in one’s name. That begs for a deeper philosophical question. Not about any individual, per se, but a conversation that allows us to examine how we can—or should, even—take responsibility for what we put into the world, our contributions into the world," he said, vaguely.

"How do we provoke a conversation? We see that in politics. There’s anger and divisiveness, and it’s literally life-threatening in the extreme. My question is: Is this our future? Is anger and divisiveness our future? Or can we be empowered and empower others while simultaneously putting empathy and civility into the dominant conversation? That’s the discussion we should be having.

"I’m not unaware that there’s interest in my life. My life is wonderful. I have a relationship [with girlfriend Jeanne Cadieu] that is truly wonderful, and I have a family I love so much. And this whole period of time has made me realise that."

For more analysis on the Jake Gyllenhaal / Taylor Swift saga, go have a listen to Kee and Laura on today's episode of The Spill. They also discuss Lizzo's upcoming new reality TV series Watch Out for the Big Grrrls, and share their weekend watches!

Kumanjayi Walker was fatally shot by police in 2019. A trial is finally underway.

19-year-old Walker died after being shot three times during the attempted arrest, and it's those subsequent second and third shots that saw Rolfe arrested for alleged murder.

More than two years on, a trial has commenced in Darwin, Northern Territory, after lengthy delays due to COVID.

The case is being heavily scrutinised because of the disproportional number of Aboriginal Australians who die while in police custody.

There have been close to 500 fatalities recorded since a 1991 royal commission into preventing Indigenous deaths in custody. And as The Guardian reports First Nations people are six times more likely to die in custody than non-Indigenous people.

You can read the full story here: Kumanjayi Walker was fatally shot by police in 2019. A trial is finally underway.

What to watch this weekend.

The longest week in existence (I cannot verify this, but it feels right) is finally coming to an end, and you know what that means..?

I have a few TV recommendations for you this weekend, starting with the funny, wholesome, easy-to-watch rom-com we all need: Starstruck.

The show comes from the brain of Kiwi comedian Rose Matafeo, whose work is ALWAYS great. She plays millennial ex-pat Jessie who meets film star Tom (Nikesh Patel) in the bathroom of a London nightclub and ends up... going home with him.

The second season just came out this week, so for all the details check out our rundown on why you should watch it: Starstruck was one of the best new TV shows of 2021. And the second season comes out today.

Best of all, all 12 eps of season one and two are on ABC iview right now, for FREE binging. Heaven.

Once you've fallen in love with a messy New Zealander and hot actor playing a hot actor, may I suggest a slight change in direction to Bel-Air, over on Stan.

The series is a reboot of the 90s sitcom we all know and love, but transforms the storyline into a much grittier tale about race and privilege. It's fascinating, and I can honestly see a lot of sitcoms being given the same treatment in the future.

Here is our full review: Should I Watch It? Stan's Bel-Air, the gritty remake of everyone's favourite 90s sitcom.

Have a great weekend!

Shark attack victim remembered, and all the news you need to know this morning.

It's Friday, and you all deserve a laugh.

My colleague Shannen recently babysat some small humans and she... lost it. Like, lost it.

Parents, enjoy her apologies, snack-giving and escape to the car during hide-and-seek as you prepare for another weekend of relentless parenting: "I just babysat for 8 hours, and now I want to apologise to parents everywhere."

Now back to the news. Here are the five biggest stories to get across this morning:

The victim of a deadly shark attack in Sydney's east has been identified as a "keen diver" and regular swimmer.

35-year-old Simon Nellist from Wolli Creek was due to be married soon, after postponing his wedding due to COVID.

News.com.au reports he was a former Royal Air Force serviceman and English expat who fell in love with Australia and a Sydney woman.

He died after being attacked by what witnesses say was a four-and-a-half metre great white shark at Little Bay in the city's east on Wednesday. 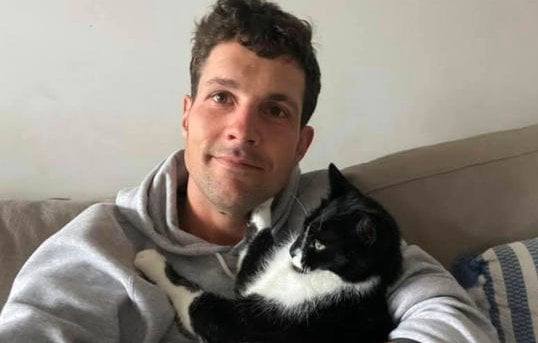 NSW Premier Dominic Perrottet called it a "horrific tragedy" and said the government extended its sympathies to the family of the man.

A local ocean swim race planned for Sunday was cancelled "out of respect for the swimmer and his family".

Agriculture Minister Dugald Saunders said Primary Industries would work with the other authorities to determine if the shark - or any others - remained in the vicinity. They've installed six SMART drumlines in the area as part of an incident response plan.

OPINION: "Today, a snuff video is playing on every device in the land, dressed up as ‘news’."

Hospitality density limits will be scrapped along with retail and workplace QR check-ins, but indoor mask requirements will remain, as Victoria cautiously eases COVID-19 restrictions.

Premier Daniel Andrews says Victoria will begin moving "back to normal" over the coming weeks with the state's Omicron outbreak subsiding.

Under new pandemic orders, from 6pm on Friday one person per two square metre density limits in hospitality and entertainment venues will be end, meaning dancefloors can reopen.

✔ Density limits of one person per two square metres at hospitality and entertainment venues will be removed.

The state government will meet with industry leaders on Friday to discuss how the public and private sectors will approach a return to the office.

Strict mask mandates and QR check in requirements are also among a swathe of COVID-19 restrictions being eased in NSW over the next week.

Premier Dominic Perrottet announced the changes on Thursday, with the direction for employees to work from home will be scrapped from Friday with the matter left to the employer's discretion.

The NSW Government is taking a staged and flexible approach to the easing of restrictions as the State continues to take a measured response to managing COVID-19.

More info including details on easing of restriction: https://t.co/MytxY5SNER pic.twitter.com/d4Xy7itBMK

The two metre density limit for indoor venues will also be scrapped on Friday, and QR check-ins will only be required for nightclubs and music festivals with more than 1000 revellers.

3. Consent education to be mandated in Australian schools.

In case you missed it, Chanel Contos and her Teach Us Consent campaign were successful yesterday in bringing about huge change in the Australian education system.

Education ministers across the nation "unanimously" agreed to implement holistic and age-appropriate consent education in every Australian school.

Chanel sparked the call to action after sharing thousands of students' testimony of sexual assault on social media.

The new curriculum be implemented from 2023, and will include information around gendered stereotypes, coercion and power imbalances.

Senator Payne first came to parliament in 1997, and has since overseen key portfolios including defence and is currently foreign affairs minister and minister for women.

"I think (her tenure) is an enormous encouragement to all women of this country and young girls in this country," he said in parliament.

Opposition Leader Anthony Albanese also congratulated Senator Payne on her achievement and said she had a good relationship with people on both sides of the chamber.

US President Joe Biden says there is now every indication Russia is planning to invade Ukraine in the next few days and is preparing a pretext to justify it, after Ukrainian forces and pro-Moscow rebels traded fire in eastern Ukraine.

The Kremlin accused Biden of stoking tension and released a strongly worded letter which accused Washington of ignoring its security demands and threatened unspecified "military-technical measures".

President Biden says there's "every indication" that Russia will attack Ukraine "within the next several days"https://t.co/sfOA2HBzmY

"We have reason to believe they are engaged in a false flag operation to have an excuse to go in. Every indication we have is they're prepared to go into Ukraine and attack Ukraine," Biden told reporters as he departed the White House.

"My sense is this will happen in the next several days."

And you're up to date!

Check in on the news feed throughout the day for all the latest in news, celebrity and fashion.

Why everyone's talking about The Tindler Swindler.

It seems everyone is talking about Netflix's The Tinder Swindler right now. Before that, it was The Puppet Master, Dirty John and Who The Hell Is Hamish. TV shows and podcasts about con men and women are everywhere.

When we hear about the elaborate schemes con artists use to scam money from innocent victims, the intrigue is in how they pull it off... and convince others to take part in their web of lies.

In this episode we speak to someone who fell victim to a con master; the tricks he used, and the damage left in his wake.

What women were talking about on Thursday.

What women were talking about on Wednesday

What women were talking about on Tuesday

What women were talking about on Monday