In some positive news, Queensland public high school students will get free period products such as tampons and sanitary pads from July.

The state government has been trialling vending machines from charity Share the Dignity, which dispenses period packs, containing six tampons and two sanitary pads, in 53 state high schools. Premier Annastacia Palaszczuk says the government will fund machines in all 276 state high schools in the June 21 budget.

"I'm pleased to announce that we've got $13.3 million in the upcoming budget to offer free sanitary products at every Queensland state school. This is fantastic ... with cost of living pressures I believe that this is a great measure, especially for our girls and young women out there across our secondary schools." 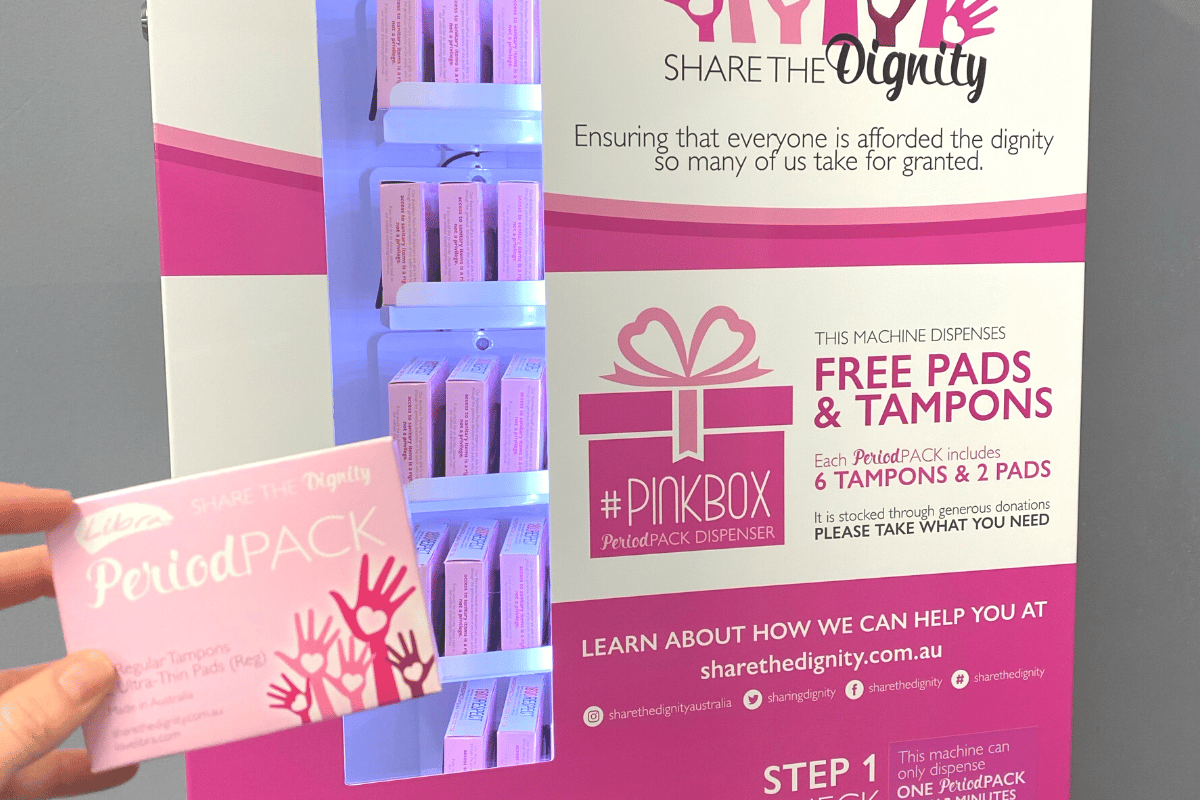 The Reserve Bank of Australia has raised the cash rate by the biggest margin in one go since February 2000 as it tries to rein in ballooning inflation.

The RBA raised the cash rate by 50 basis points to 0.85. It’s a larger shift than economists predicted.

"Inflation in Australia has increased significantly," RBA governor Philip Lowe said. "Higher prices for electricity and gas and recent increases in petrol prices mean that, in the near term, inflation is likely to be higher than was expected a month ago. Today's increase in interest rates will assist with the return of inflation to target over time."

Listen to tonight's episode of The Quicky below:

Bill Cosby was previously accused of sexual assault by more than 50 women over nearly five decades. In 2018, Cosby was found guilty of drugging and molesting Andrea Constand, an employee at Temple University in Philadelphia, in his home in 2004.

Pennsylvania's Supreme Court overturned Cosby's conviction in June 2021, after the actor had served more than two years of a three to 10-year sentence. The court said Cosby should not have faced the charges because a previous district attorney had publicly promised in 2005 not to prosecute him. In March, the US Supreme Court declined to review that decision.

Now, a civil trial is underway.

A woman - Judy Huth - has accused Cosby of sexually assaulting her in the mid-1970s. She has begun her court testimony, describing how she and a friend met the comedian as teenagers and accompanied him to the famed Playboy Mansion.

Huth told jurors she was playing frisbee at a public park on a weekday when she noticed a movie filming nearby. She and a friend, Donna Samuelson, walked closer and recognised Cosby, Sidney Poitier and other actors. Cosby approached the girls and they "bantered", she said, before he invited them to meet him the following Saturday at a tennis club. She and Samuelson were "excited", she said.

"We were kids. It was a celebrity. It was out of the norm, that's for sure," she told the court.

Huth said she and Samuelson met Cosby at the tennis club, then followed him by car to his home, played a few games of pool before moving on to another location.

She realised it was the Playboy Mansion when Cosby pointed out a picture of Hugh Hefner on the wall, she explained.

In her lawsuit, Huth said Cosby forced her to perform a sex act while she was at the mansion. She previously said the incident occurred in 1974, when she was 15, but recently said she now believes it was 1975.

The civil trial in California, one of the last legal cases against Cosby, is taking place 11 months after Cosby was freed from prison when Pennsylvania's highest court threw out his sexual assault conviction in a different case.

Why Hollywood is rejecting Neve Campbell.

The mass exodus of judges from The Masked Singer Australia is continuing, with Jackie O announcing this week that she is also walking away from the popular series.

And the MTV Movie and TV Awards took place this week, bringing together some of our favourite stars under one roof. From Jennifer Lopez calling out her enemies to Chrishell Stause and G Flip sharing a romantic moment, let's talk through the biggest moments of the night.

And in a shocking turn of events, Neve Campbell has confirmed that after 25 years she is leaving the Scream franchise due to a pay dispute, saying in a surprisingly honest statement that the offer for the next movie did not reflect her true worth. And it’s not the first time Hollywood has rejected Neve, and other actresses, for making similar requests behind the scenes.

Listen to The Spill below:

Boris Johnson survives no confidence vote, and all the news you need to know this morning.

Yesterday was the MTV Video Music Awards. In case you missed it, my colleague Isabella Ross rounded up the five biggest moments from the ceremony, including an awkward three-way hug and JLo's emotional speech. You can read all about it here.

But before you dive into the world of entertainment, let's get you across the biggest news stories you need to know today, Tuesday June 7.

UK Prime Minister Boris Johnson has won a confidence vote, seeing off a challenge to his leadership brought by members of parliament within his Conservative Party.

Johnson won the secret vote 211 to 148 according to Graham Brady, chairman of the 1922 party committee that oversaw the ballot.

Announcing the results, Sir Brady said, "I can report as returning officer that 359 ballots were cast, no spoilt ballots, that the vote in favour of having confidence in Boris Johnson as leader was 211 votes and a vote against was 148 votes."

"And therefore, I can announce that the parliamentary party does have confidence in Boris Johnson."

Julian Sturdy, the MP for York Outer, said the scale of tonight's vote against Mr Johnson "is clear evidence that he no longer enjoys the full-hearted confidence of the parliamentary party and should consider his position"https://t.co/BANawZKNcG pic.twitter.com/TW8r4p2Smf

The vote came after a growing number of lawmakers in Johnson's Conservative party questioned the British leader's authority following the "partygate" scandal.

In 2020, Johnson and his staff held alcohol-fuelled parties when Britain was under strict COVID-19 lockdowns.

2. More than half of Aussie teachers plan to quit.

More than half of Australian teachers are planning to quit the profession, with some describing their workload as "excessive" and "unsustainable", a new study has found.

A Monash University study, published last month in the Australian Journal of Education, surveyed 2444 Australian primary and secondary school teachers across the country and found nearly 60 per cent plan to leave the profession.

The attrition rate is so high that up to half of teacher graduates will have left in their first five years - about as long as it takes to qualify as a teacher.

More than half of Australian teachers surveyed are planning to quit the profession, with some describing their workload as excessive and unsustainable. https://t.co/td8U8zcZzO #education #Teachers pic.twitter.com/DlmoE8krxl

Workload pressure, burnout and wellbeing issues - as well as how they were portrayed in public debate - were the main reasons for wanting to quit.

Among teachers who intended to leave the profession, 62 per cent referred to workload pressures and its impact on their health and wellbeing as the top reason.

Exhaustion, stress and burnout were cited as other reasons for more than 20 per cent of the respondents who planned to quit.

Warning: This post deals with sexual assault and may be triggering for some readers.

The state recorded the lowest rate of physical assaults across the country last year, according to the Productivity Commission's latest Report on Government Services, which includes both reported and unreported crime.

"While the highly unique environment in Victoria last year clearly contributed to the overall decrease in crime, it was incredibly positive to see a reduction in serious offences which impact the community such as home burglaries, robberies and car thefts," Nugent said.

Elon Musk is threatening to walk away from his $US44 billion ($A61 billion) bid to buy Twitter, accusing the company of refusing to give him information about its spam bot accounts.

Lawyers for the Tesla CEO made the threat in a letter to Twitter, which says Musk has repeatedly asked for the information since May 9, about a month after his offer to buy the company, so he could evaluate how many of the company's 229 million accounts are fake.

The lawyers say in the letter that Twitter has offered only to provide details about the company's testing methods. But they contend that's "tantamount to refusing Mr Musk's data requests". Musk wants data so he can do his own verification of what he says are Twitter's lax methodologies.

The lawyers say that based on Twitter's latest correspondence, Musk believes the company is resisting and thwarting his information rights under the April merger agreement.

Experts have said Musk can't unilaterally place the deal on hold, although that hasn't stopped him from acting as though he can. If he walks away, he could be on the hook for a $US1 billion ($A1.4 billion) breakup fee.

In case you missed it, Aussie golfer Minjee Lee has won the US Women's Open in North Carolina, joining Australia's all-time golf greats.

Lee converted a three-stroke third-round lead into a four-shot triumph at Pine Needles Country Club to pocket a cheque for a record $US1.8 million ($A2.5m).

The 26-year-old finished with a score of 13-under 271, the lowest 72-hole total in tournament history after closing with an even-par 71 on Sunday.

Lee is the third Australian to win the US Women's Open, the biggest event in female golf, after legends Karrie Webb (2000 and 2001) and Jan Stephenson (1983).

"I'm speechless. I can't believe it right now," she said. "It's such a great honour just to be amongst those two names."

"It's just super, super special and it's been my dream since I was a little girl, the one I always wanted to win. So now I've done it and it just feels amazing."

This one hits hard. Tears in my eyes. So so proud. Just a kid from Perth. Two major wins to her name now 🏆 Inspiring #USWomensOpen pic.twitter.com/HwvQzi2f19

That's it, you're all up to speed. We'll keep you updated with more news of the biggest news stories throughout the day.

The hidden cost of the Heard/Depp verdict.

Johnny Depp and Amber Heard's divorce has been one of the most acrimonious in Hollywood history, and their recent defamation trial in the US made for compelling viewing for millions of people who were firmly on "Team Johnny".

But while the case may now be over, the fallout from the jury's verdict is only just beginning, as millions of women will now find it harder than ever to speak out against their abuser.

The Quicky speaks to two domestic violence experts, and a survivor about why the true cost of this case is going to be about a lot more than $15 million dollars.