There are mounting fears the highly contagious foot and mouth disease could infiltrate Australia and decimate the cattle industry.

Foot and mouth disease (FMD) is a contagious viral disease which impacts livestock – pigs, cattle, sheep and goats –  and holds serious consequences for agriculture industries. It commonly spreads from animal to animal and it very rarely can spread to humans. FMD shouldn’t be confused with the human disease that is hand, foot and mouth, which is different.

It was detected in Indonesia in May and spread to Bali last week.

Federal Agriculture Minister Murray Watt is visiting Indonesia this week to gather more information. It comes as Australian travellers return from the holiday destination in droves.

"Disinfectant footbaths must be introduced immediately at airports to properly treat potentially exposed passengers," he said.

NSW Deputy Premier Paul Toole said discussions with the federal government and other states had taken place about implementing stringent controls for returning holiday-makers. He warned of the dire threat the disease posed to the cattle industry and the livelihoods of thousands of farmers across the state.

"Nobody wants to be the person who brings in a disease that would devastate our livestock industry, cost the economy $80 billion, and shatter regional communities for years to come," he said.

Dairy NSW Regional Officer Alicia Richters warned the repercussions of the disease hitting the industry would be felt by every Australian consumer as the cost of food would spiral.

"We've already been devastated this year with significant flooding, we had our fourth flood only last week. It would take a massive toll not only on our producers but the service industry too."

University of Sydney professor Michael Ward said keeping the disease out was "a new challenge and a national priority".

"Countries free of foot and mouth disease would not buy Australian meat or milk if we became infected because of the fear of importing the disease," he said.

NSW Agriculture Minister Dugald Saunders said with 103 flights each week from Australia to Bali "foot and mouth disease is the closest it has ever been to our country". The virus has not been detected in Australia for over 150 years.

He said a potential vaccine was being developed using mRNA technology to tackle eight different strains of the disease.

Meanwhile, the government says travellers entering Australia must ensure their clothes and shoes are clean and free from soil and manure. Australians should also stay away from livestock for a week after their return.

It is expected that further biosecurity measures will be put in place soon.

Do you find the news cycle overwhelming? Depressing? Confusing? Boring? Endless? Then you need The Quicky. Mamamia's daily podcast that gets you up to speed on the top stories.

All your favourite actresses just took a career hit.

Last night two different Australian reality TV shows made history when they announced this year’s winners. Here’s everything you need to know.

And Cameron Diaz is making a return to Hollywood with a role in a new Netflix movie and that means she’s back on the publicity trail and telling all sorts of wild stories. Her latest one includes a Paris modeling job gone wrong and a possible drug fiasco.

Plus, the Emmy nominations for 2022 have been announced, and the list is full of shocks and surprises when it comes to our favourite TV shows. While a few of our favourite leading ladies, including Zendaya and Lizzo, have made history with their nominations, many other performers have taken a career hit.

Listen to The Spill below.

Sinkhole swallows NSW home after floods, and all the news you need to know this morning.

We're officially halfway though the week.

Here are the top news stories you need to know today, Wednesday July 13.

A home along the Hawkesbury River in New South Wales has been partially swallowed by a sinkhole after recent floods ravaged the area.

Parts of the house, which was unoccupied at the time, crumbled into the sink hole when the ground gave way around 10am on Monday. The council is waiting for an assessment before repairs can get underway.

The property's owner, Mike, who lives in another house nearby, said it was the third time his riverfront property had flooded this year.

"The next shower comes along my house will be gone. I am wondering what is going to be done now," he told the ABC. 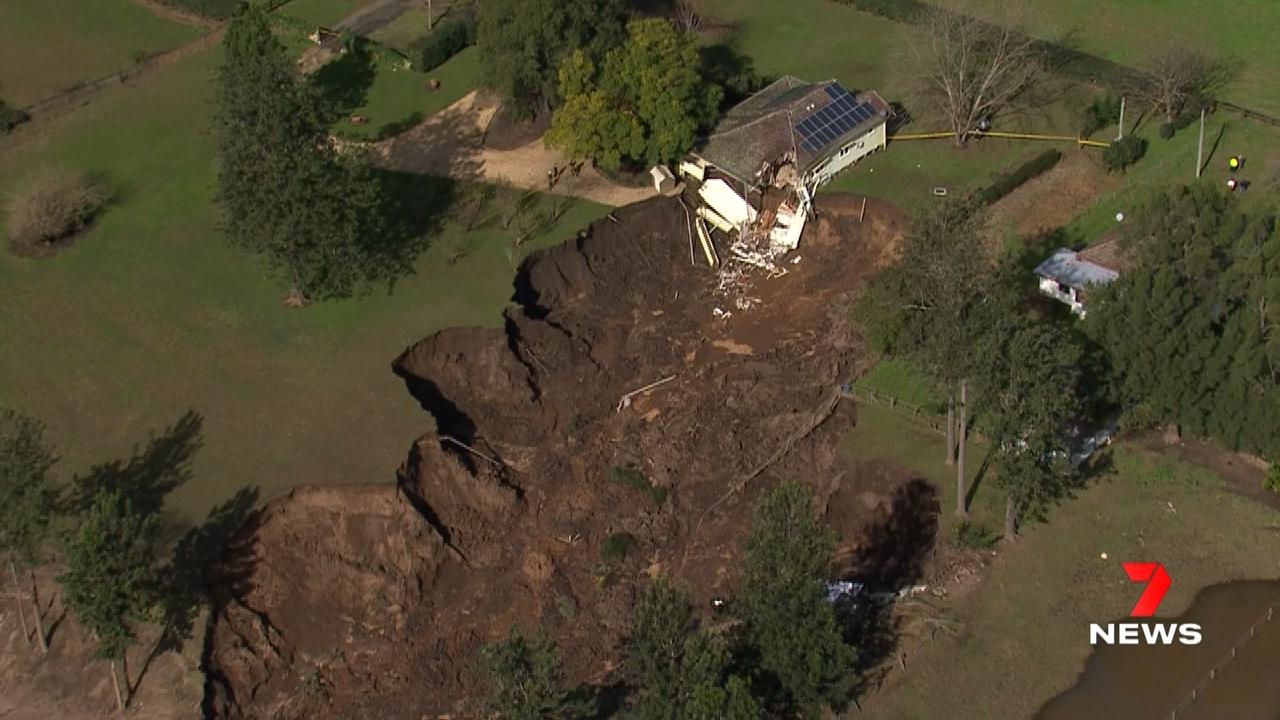 Elsewhere in the state, more flood-hit areas are eligible for federal payments up to $1000 to help with recovery, including Cumberland, Mid Coast, Muswellbrook, Nambucca, Newcastle, Port Stephens, Randwick and Warren.

Prime Minister Anthony Albanese said the federal and NSW governments were working closely together to support victims of the disaster, and more than 600,000 people affected by the floods had together received in excess of $514 million in payments.

"I made a decision based on the advice that I had received that further mandating masks was not the most effective way to get the message out about the importance of mask wearing," she told reporters yesterday.

Under new measures that came into effect from 11.59pm yesterday, people who test positive to the virus will now be exempt from testing - and isolating for four weeks instead of 12 - in line with Australian Health Protection Principal Committee advice. NSW Health has also revised the COVID-19 reinfection period down to four weeks.

Meanwhile, a cruise ship will dock in Sydney today carrying scores of people who have tested positive for COVID-19.

The outbreak aboard the Coral Princess has mostly infected crew, with 118 of them in isolation. Passengers will have to record a negative result on a rapid antigen test before disembarking, while crew will have to remain on board.

#Breaking: Passengers have started disembarking the Coral Princess. Three have already told me that no one checked to see their RAT tests were negative this morning @SkyNewsAust pic.twitter.com/9IKoqCT5It

At the beginning of the pandemic in March 2020, another Princess cruise liner - the Ruby Princess - was briefly linked to one in eight NSW coronavirus cases.

Two major Australian retailers are being investigated by the privacy watchdog for their use of facial recognition technology in stores.

Kmart and Bunnings will be investigated over their use of the technology which captures images of shopper's faces and stores unique "faceprints".

The retailers say facial recognition is being used in some stores to protect shoppers and staff, combat anti-social behaviour and reduce theft.

But the Office of the Australian Information Commissioner has concerns over the companies' "personal information handling practices".

Listen to more on facial recognition:

The watchdog on Tuesday announced the investigation after consumer advocate group CHOICE raised the alarm about the technology being used without customer's knowledge or consent.

The information collected by the technology could be in breach of Australia's privacy laws, CHOICE consumer data advocate Kate Bower said.

Bunnings chief operating officer Simon McDowell said the company was aware of the opened investigation and would cooperate with the watchdog.

With prayers, flowers and flags draped in black ribbons, Japan has said farewell to former Prime Minister Shinzo Abe, after he was gunned down at a campaign rally last week.

Crowds packed pavements lined with a heavy police presence as the hearse carrying Abe, who died at age 67, departed from a central Tokyo temple on a procession through the city.

"Thank you very much for your work for our country!," one man repeatedly shouted.

Hundreds had filed into the temple where Abe's funeral was held on Monday evening and Tuesday morning, prior to the private ceremony, to pay their respects. His assassination on Friday by an unemployed man wielding a homemade gun stunned a nation where both gun crime and political violence are extremely rare.

Japanese have turned out in their hundreds to bid farewell to assassinated former PM Shinzo Abe https://t.co/L7DEMbyKIp pic.twitter.com/QgLVH4vvcV

The suspected killer, arrested at the scene and identified by police as 41-year-old Tetsuya Yamagami, believed Abe had promoted a religious group to which his mother made a "huge donation", Kyodo news agency has said, citing investigators.

Chief cabinet secretary Hirokazu Matsuno told a news conference on Tuesday that the Japanese government will consider whether there is a need to further regulate handmade guns.

HBO drama Succession has topped the list of Emmy nominees with 25 nods, including one for best drama series.

The rivals for best drama in television's highest honours include Netflix's South Korean thriller Squid Game, the first non-English language show to be nominated for an Emmy.

Brian Cox, who stars as patriarch Logan Roy in Succession, will compete for best actor against Jeremy Strong, who plays his troubled son Kendall.

Squid Game actor Lee Jung-Jae is also in the running.

Contenders for best comedy actress include Rachel Brosnahan for her role as a 1950s housewife and comedian on Mrs Maisel, along with Issa Rae of Insecure and Hacks star Jean Smart.

Winners of the Emmys will be announced at a ceremony in Los Angeles on September 12.

You're all up to speed. We'll keep you updated with more of the top news stories throughout the day.

A guide to the DIY cervical cancer screening test.

Australia has become the first country in the world to enable women and people born with a cervix to conduct their own screening for Human Papilloma Virus, in the hope it will encourage more women to get regular check ups.

But how exactly do you go about it yourself, and how can you be sure that you have done a good enough job to get an accurate test result?

The Quicky speaks to a gynaecologist and a cervical cancer expert to find out why this new measure has been introduced, and provide a friendly how-to guide for swabbing the inside of your own vagina.