An inquiry into the NDIS and its failures is underway.

The National Disability Insurance Scheme has failed in remote Indigenous communities across northern Australia, a royal commission has been told.

“The market has not responded and so people’s needs are not being fully met because of the lack of availability of services,” Northern Territory Public Guardian Beth Walker said at the hearing. “It is difficult for service providers given remote distances and there is market failure.”

Walker said the choice between providers that delivered basic services in remote and very remote communities was marginal or non-existent. Overcrowded housing and homelessness was also an issue for many disabled people in remote Indigenous communities.

“When we are talking about people with high disability needs, it means that housing is a critical issue,” Walker said.

Some people were forced to leave their remote communities to find care, severing their ties to their country and culture.

There are about 66,000 Indigenous people with a profound or severe disability in Australia.

Of those, about 11 per cent or roughly 7000 people live in remote or very remote areas, according to the Australian Bureau of Statistics.

The Royal Commission into Violence, Abuse, Neglect and Exploitation of People with Disability is examining the treatment and experiences of thousands of Indigenous people with disabilities in remote communities. Barriers to accessing the NDIS and disability services are among the issues being covered.

Do you find the news cycle overwhelming? Depressing? Confusing? Boring? Endless? Then you need The Quicky. Mamamia’s daily podcast that gets you up to speed on the top stories,

Barilaro has since withdrawn from the job, after intense scrutiny over his appointment only months after he officially left politics. But it's the recruitment process and how exactly he got the job that has been brought into question.

A former senior NSW public servant, Jenny West, was appointed to the plum job in New York but was allegedly dumped and told the role would “be a present for someone” – before it was given to former deputy premier John Barilaro.

Jenny West said she felt “so confused” and “shocked” in October when she was told she no longer had the job, just a month after being offered the role. Ms West was giving evidence at a parliamentary inquiry into the appointment of Mr Barilaro as the state's Senior Trade and Investment Commissioner to the Americas.

The revelations today are disgusting.

A rejected candidate for the lucrative NYC trade role was told the job was a "present for someone".

John Barilaro later got the job.

Is that how the Perrottet Government works - dishing out $500k taxpayer funded jobs as presents for mates?

A committee investigating the appointment of John Barilaro to a New York trade posting has sent explosive evidence from a former public servant to ICAC | @lachlan_kennedy #nswpol pic.twitter.com/gmoxDVtyhB

The final three housemates for Big Brother 2022 have been decided and the live finale is taking place tonight, with only one original housemate left in the mix. Here’s everything you need to know.

And the first trailer for the second season of The Kardashians has been released, giving us our first look at Kourtney Kardashian’s wedding prep, Kylie Jenner’s new baby, and a secret health scare. But there’s one odd moment between Kim Kardashian and Pete Davidson buried at the end of the trailer that we need to discuss immediately.

Plus, today some shocking but not unexpected news was confirmed when it was announced that Glee star Lea Michele is taking over the coveted role of Fanny Brice from Beanie Feldstein in the Broadway production of Funny Girl. The story behind this casting choice is a scandalous tale more than ten years in the making, and the outcome is not good news for anyone in the entertainment industry.

Listen to tonight’s episode of The Spill below:

Monthly petrol bill soars to $300, and all the news you need to know this morning.

Sri Lanka has been making headlines lately, as the country faces one of the worst economic crises the world has ever seen.

Yesterday, my colleague Isabella Ross explained everything you need to know about what's happening in Sri Lanka right now, including the severe food shortage and mass protests. You can read all about it here.

But first, let's get you across the biggest news stories you need to know this Tuesday morning.

Families are paying just under $300 a month to fill up the car at the bowser, with petrol prices back just below March's record high.

The Australian Institute of Petroleum reported yesterday the national average unleaded petrol price rose by a cent to 212.1 cents a litre last week.

Australian motorists have been suffering at the bowser this year, with petrol prices pushing past $2 a litre. And we'll likely be paying more come September. (via @abcnews) https://t.co/cTTDmrMFTh

CommSec estimates it is costing the average family $296.94 a month to fill up the car with petrol, or an extra $74.76 a month compared with the start of the year.

Motorists can expect to see a jump in petrol prices from September, when the temporary cut to the fuel excise will end.

2. Roberts cleared over 1998 police murders after 22 years in prison.

Jason Roberts is a free man after two decades in prison with a fresh jury finding him not guilty of murdering two Victoria policemen, in a verdict that's devastated the officers' families.

Sergeant Gary Silk and Senior Constable Rodney Miller were ambushed and killed in the early hours of August 16, 1998 while staking out armed robbery targets.

Bandali Debs is serving a life sentence for their murders.

Roberts, now 41, was convicted alongside Debs and jailed for a minimum 35 years in 2003.

When Jason Roberts was 19, he began a sentence for the murder of two Melbourne police officers. Today, he was set free after being acquitted in a retrial.#TheProjectTV pic.twitter.com/kEhSH1dqt6

But a new Supreme Court trial was ordered for Roberts after allegations of police wrongdoing were investigated by Victoria's anti-corruption watchdog.

Following months of evidence from dozens of witnesses and being locked away together to deliberate since Thursday, jurors returned their verdict on Monday.

Roberts was granted bail ahead of being sentenced on September 8 on armed robbery charges he had admitted committing with Debs at the start of the trial.

He did not comment as he left the court on Monday.

Neither did the families of Sgt Silk and Sen Const Miller, but they later issued a joint statement through the Victoria Police Association saying they are "absolutely devastated."

3. Judge to deliver Dawson verdict ASAP as trial wraps up.

The judge overseeing the two-month long murder trial of Chris Dawson has said he will try to deliver the final verdict in the case relatively quickly.

"I hope to be able to provide my judgment relatively quickly. That doesn't mean tomorrow I assure you," said NSW Supreme Court Justice Ian Harrison, as the trial wrapped up yesterday.

Dawson, 73, is accused of murdering his wife Lynette Dawson in January 1982 so he could have an unfettered relationship with one of his high school students, known as JC, while retaining full ownership of assets like his home in Bayview, Sydney. 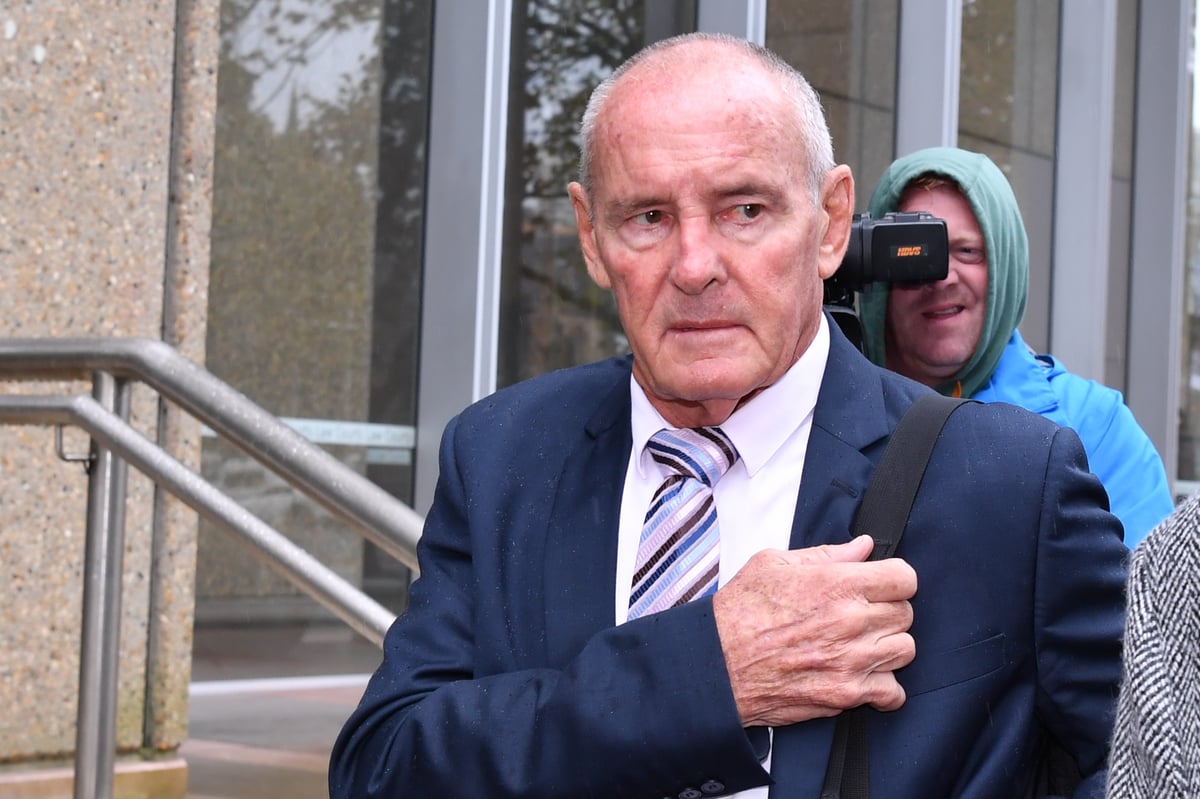 Concluding her closing submissions, Dawson's barrister Pauline David urged the court to find her client not guilty, saying the Crown's circumstantial case had not proved beyond reasonable doubt what actually happened to Lynette  when she disappeared.

"The only verdict open is a not guilty verdict, Your Honour," she said.

While Dawson had made plans for the future with her family in late 1981 such as commissioning portraits of her two daughters and organising a surprise birthday party for her mother, she still decided to walk out and cut contact with everyone, the court heard.

She said the court should reject evidence that Dawson was violent or abusive towards his wife, saying testimony had been coloured by witnesses' negative perceptions about him or contaminated by hearing The Teacher's Pet podcast or speaking to its author, journalist Hedley Thomas.

Queensland authorities are managing a COVID-19 outbreak of more than 100 people on a cruise ship, as the state's third wave nears 41,000 active cases.

The outbreak among the crew and passengers on the Coral Princess, which was travelling from Brisbane to Sydney, led to Princess Cruises offering refunds to those booked on its next 12-day trip.

Queensland Health Minister Yvette D'Ath says protocols were in place on the ship before the outbreak; the first for the local cruise industry since it restarted earlier this year.

She said some passengers are isolating at home or in other accommodation, while authorities are helping the company manage infected staff on board.

"The virus is everywhere and there's no escaping that," D'Ath told reporters yesterday.

Over 100 passengers on board the Coral Princess cruise ship, travelling from Brisbane to Sydney, have tested positive for #COVID19. @vella_lara #9News pic.twitter.com/gp0OA0O8xG

Princess Cruises said they were "doing everything possible" to ensure the safety of guests and crew.

"We are adhering to comprehensive protocols that were agreed in conjunction with federal and state authorities and we are confident that they are working effectively," a spokesman told AAP.

Queensland recorded another 4804 cases yesterday, taking the number of active cases to 40,489.

5. Pressure on Australia over climate case.

New Zealand will back a bid for an International Court of Justice ruling on climate change, heaping pressure on Australia to follow suit.

As Pacific leaders gather in Fiji for the Pacific Islands Forum this week, Vanuatu is spearheading a campaign to seek an advisory opinion from the court.

Leaders are descending upon Fiji tonight, ahead of the first Pacific Islands Forum in three years, with climate change and China set to dominate talks. @ElizaEdNews #9News pic.twitter.com/riPvT0963u

The Melanesian state wants the ICJ to consider whether international law requires countries to meet their emissions reduction targets to protect the human rights of future generations, with the matter bound for a vote of the United Nations General Assembly later this year.

While Australia is yet to give support for the campaign, Jacinda Ardern has signed New Zealand up.

"We're supportive of those moves," Ardern said. "We haven't got to the stage yet of whether there's any particular wording or framing for that, of course we'd want to make sure that we're able to sight that, but as a general principle we're supportive."

Australia - which has lifted its emissions targets under Anthony Albanese's government - is yet to offer support.

You're all up to speed. We'll be back to bring you more news stories throughout the day.

Why we can't pretend the pandemic is over.

Winter is well and truly here and so is a third wave of the pandemic, with experts warning that case numbers of COVID-19 are set to spiral significantly over the coming weeks.

But how concerned should we be now that we are 'living with COVID-19'? Could we really see a return to some of our most hated restrictions including widespread mask wearing, suspension of elective surgery, and even... lockdowns?

The Quicky speaks to an expert epidemiologist and a GP to find out what this means for you and your family, everything you need to know about getting a fourth booster jab, and what you can do to stay safe.