The grief-wrenched Texan town of Uvalde has begun burying its dead from the bloodiest US school shooting in a decade.

A funeral took place for a pair of ten-year-old girls who were among the 19 students and two teachers killed one week ago. Separate memorial services were held hours apart for Amerie Jo Garza, remembered for her love of swimming and art, and her classmate Maite Yuleana Rodriguez, an honour student who dreamed of becoming a marine biologist.

Funerals for the remaining victims are planned for the next two weeks.

One service on Wednesday will be a joint memorial for Irma Garcia, 48, one of the two teachers killed, and her husband, Jose Garcia, 50, who died of a heart attack two days after the shooting. The couple, who were high school sweethearts, are survived by four children.

The chief of the Uvalde Consolidated Independent School District police force has come under heavy criticism for his role as on-scene commander of local law enforcement’s handling of the shooting.

According to Texas Department of Public Safety (DPS) officials, it was the chief who decided against immediately storming the classroom where the shooter opened fire. As many as 19 officers waited outside the classroom for nearly an hour as school children inside repeatedly called 911 pleading for help. US President Joe Biden has joined many fellow Democrats in calling for new gun restrictions, something Republicans have successfully held off in recent years. 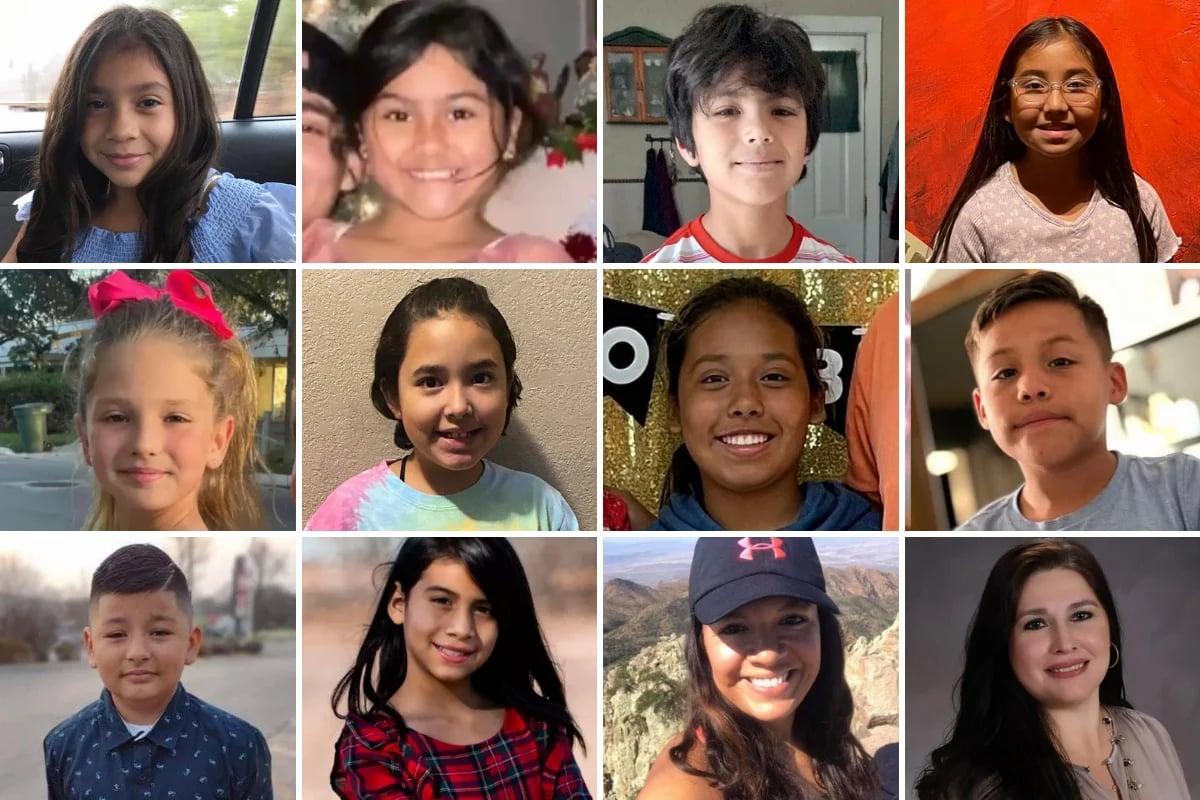 Some of the victims from the shooting. Image: Family Supplied/AAP/Twitter/Facebook.

Do you find the news cycle overwhelming? Depressing? Confusing? Boring? Endless? Then you need The Quicky. Mamamia’s daily podcast that gets you up to speed on the top stories.

The Pacific needs to remain front and centre of Australia’s diplomatic priorities, Defence Minister Richard Marles says, as China looks to expand its influence in the region.

“We need engagement,” he told AAP. “If we make the Pacific a focus, if we are interested in the welfare of the Pacific, the ten million people who live there, and we’re committed to that, then Australia really stands to be the natural partner of choice.”

On Tuesday, China released a Pacific Islands position paper after failing this week to get leaders in the region to sign up to a wide-ranging agreement. The position paper spans security, development, and greater dialogue and diplomatic ties.

Chinese Foreign Minister Wang Yi announced the proposed agreement and supplemental five-year action plan were being shelved as he visited Fiji on Monday as part of his 10-country blitz through the Pacific.

Marles said China is Australia’s “biggest anxiety”, but stopped short of labelling it a security threat when asked directly.

“It’s true to say it’s Australia’s greatest anxiety but we should also be honest and speak plainly and say they are our greatest security threat as well,” Senator Paterson told Sky News. “We are not investing $270 billion over the next decade in acquiring new defence capability just for the fun of it. We’re acquiring it because we believe it's necessary to deter potential aggressors, including China.”

Fiji’s Prime Minister Frank Bainimarama said Pacific nations needed “genuine partners, not superpowers that are super-focused on power”, as he met with the Chinese foreign minister to seek a stronger commitment from Beijing to end illegal fishing and expand Fijian exports.

The United Kingdom is also increasing its presence in the region, with Royal Navy ships completing their first deployment of the Indo-Pacific before docking in Darwin this week. Foreign Minister Penny Wong is also set to visit Tonga and Samoa as Australia steps up its Pacific diplomacy effort. Senator Wong will fly out for the Pacific nations on Wednesday night, having travelled to Fiji last week.

Fiji is not anyone’s backyard — we are a part of a Pacific family. And our greatest concern isn’t geopolitics — it’s climate change.

In that spirit, I had a wonderful meeting with Foreign Minister @SenatorWong to strengthen our Vuvale Partnership with Australia. pic.twitter.com/RH80dPnCAk

Wonderful to speak with Indonesian Foreign Minister Marsudi.
Indonesia is a key partner for Australia - we share a vision for a secure and prosperous #IndoPacific and there is much we can do to strengthen our ties and enhance cooperation.
I look forward to visiting Jakarta soon. https://t.co/lOIZaKAquH

Musicians aren’t here to entertain us on TikTok.

Kevin Spacey has responded to the multiple serious charges filed against him in the United Kingdom last week.

And Kristen Stewart’s latest movie is making headlines, but not for the reason you would think. As reports surface about people walking out of Cannes’ Crimes of the Future screening, we unpack the actor’s comments about the film and consider whether this is the greatest accidental marketing they could’ve asked for.

Plus, you may have seen headlines involving pop stars like Halsey and record label demands for viral content on TikTok. Today, Halsey’s label has announced a settlement, but people are still cynically wondering if the entire thing was a very meta form of advertising. So, what’s up with these artists and their new war against the social media giant? And is any of it actually real?

Listen to the latest episode of The Spill below:

More women to serve on Labor's frontbench, and all the news you need to know this morning.

Yesterday we marked the end of another Domestic and Family Violence Prevention Month, following the deaths of two more women over the weekend.

Our News Editor Gemma Bath has shed some light on the national crisis, right here.

These are your top news stories for today, Wednesday June 1.

1. Record number of women to be sworn into cabinet today.

Anthony Albanese's new ministry will be sworn in today, with a record number of women on the frontbench.

The prime minister's 30-member frontbench will be sworn in at a ceremony at Government House, with 13 women appointed to a ministerial role, and 10 of them in the cabinet.

"This is the largest number of women who have ever served in an Australian cabinet," said Albanese, who unveiled his cabinet last night.

"We have an overflow of talent on our side of the parliament... it's the most experienced incoming Labor government in our history since federation."

Proud to lead an inclusive government that is as diverse as Australia itself. Welcome to all these new Labor members. pic.twitter.com/spdMk5znQf

The swearing in coincides with Labor securing 77 seats in the House of Representatives, after the marginal seat of Gilmore on the NSW south coast was called for incumbent Fiona Phillips.

While some MPs retained their portfolios from when Labor was in opposition, there was a shakeup in some key areas.

Tanya Plibersek has moved from the education portfolio to being the new environment and water minister, while education will now be held by Jason Clare.

Linda Burney will be just the second First Nations person to be appointed Indigenous Australians minister.

New faces to the frontbench include Anika Wells in aged care and sport, Anne Aly in early childhood and youth, and Kristy McBain in regional development, local government and territories.

The new laws, passed last November, define consent as a free and voluntary agreement that cannot be presumed, and involves ongoing, mutual communication.

The laws also clarified that if a person consents to one sex act, it does not mean they have not consented to other acts.

“It's really important to discuss it head-on.”

New affirmative sexual consent laws come into effect in NSW today with the rules backed up by the state government’s new #MakeNoDoubt campaign.

The amendment clarifies a person who is asleep, unconscious or intoxicated is not able to consent, with the government set to issue new directions to juries involved in assault trials.

"These laws set clearer boundaries for consensual sex, reinforce the basic principle of common decency that consent is a free choice involving mutual and ongoing communication, and reinforce that consent should not be presumed," Speakman said.

The man accused of raping Brittany Higgins has asked to have his trial dates vacated less than a week out from it starting.

Lawyers for Bruce Lehrmann applied for the dates to be vacated, citing a lack of available barristers with his previous counsel now unavailable to run the trial that is set to start on Monday.

Lehrmann has been committed to stand trial in the ACT Supreme Court for allegedly raping then Liberal staffer Higgins in an office inside Parliament House in March 2019.

The court heard the reason the previous counsel was no longer available was not the fault of Lehrmann.

It was handed an affidavit designed to explain why no new counsel could be found, but Chief Justice Lucy McCallum said it "tells me very little", adding it implied there were no barristers available Australia-wide.

She said she would need more evidence before vacating the trial dates, with the matter already having been pushed back a number of times.

Chief Justice McCallum adjourned the application until Thursday to allow the defence to prepare more evidence regarding vacating the dates.

The matter could potentially start on June 20 or June 27 if it would enable a new barrister to represent Lehrmann, who has pleaded not guilty.

Incoming Indigenous Australians Minister Linda Burney has implored Peter Dutton to support a constitutionally enshrined First Nations Voice, and not to find himself on the "wrong side of history" again.

Burney will become the first Indigenous woman to be sworn into federal cabinet today.

In delivering the Lowitja O'Donoghue Oration yesterday, Burney called on the new opposition leader to help unite and "inspire our country to something really great" by supporting a Voice to Parliament.

"There is no one for whom supporting a referendum for a Voice to Parliament represents a bigger political opportunity than for Peter Dutton," she said.

"An opportunity... to show his much-talked-about different side.

"It's also about being on the right side of history. And Peter Dutton has in recent days reflected on what it is like to be on the wrong side of history, after walking out on the apology to the Stolen Generations."

Burney said she would be "very pleased" to walk the path of reconciliation with Dutton, and said the Nationals and Greens had the opportunity to place the "national interest ahead of narrow political ambition".

Millions of Aussies will be able to receive a free flu vaccine from today, with Victoria announcing similar moves to five other states.

From today to June 30, Victorians aged six months and over can get a free flu shot at one of more than 3000 GPs and community pharmacies under the $33 million program.

"What this free program will do is protect Victorians and their families in the face of what is going to be a challenging winter."

Reported flu cases in Victoria jumped from 10,000 to 15,000 last week - more than the combined total of the past two seasons when infections were curbed by the closure of international borders.

This June, every Victorian aged six months and over can receive a free flu vaccination.
You can book your flu shot with your GP or pharmacist.
To find out more: https://t.co/A6qPih2S8F pic.twitter.com/DffDZlrmFw

That's it, you're all up to speed. We'll be back to bring you more of the top stories throughout the day.

Winter, flu and COVID-19: How to keep you and your family safe.

It's officially the first day of winter, but for millions of people across the country recent freezing temperatures and storms mean that the cold and flu season is already well underway.

Flu cases in particular have exploded across Australia, with many states offering free flu vaccines to everyone. But after more than two years of pandemic are we feeling a bit fatigued when it comes to getting more jabs?

The Quicky speaks to a doctor and three people who've recently had the flu to find out why it's never been more important to protect yourself and your family.