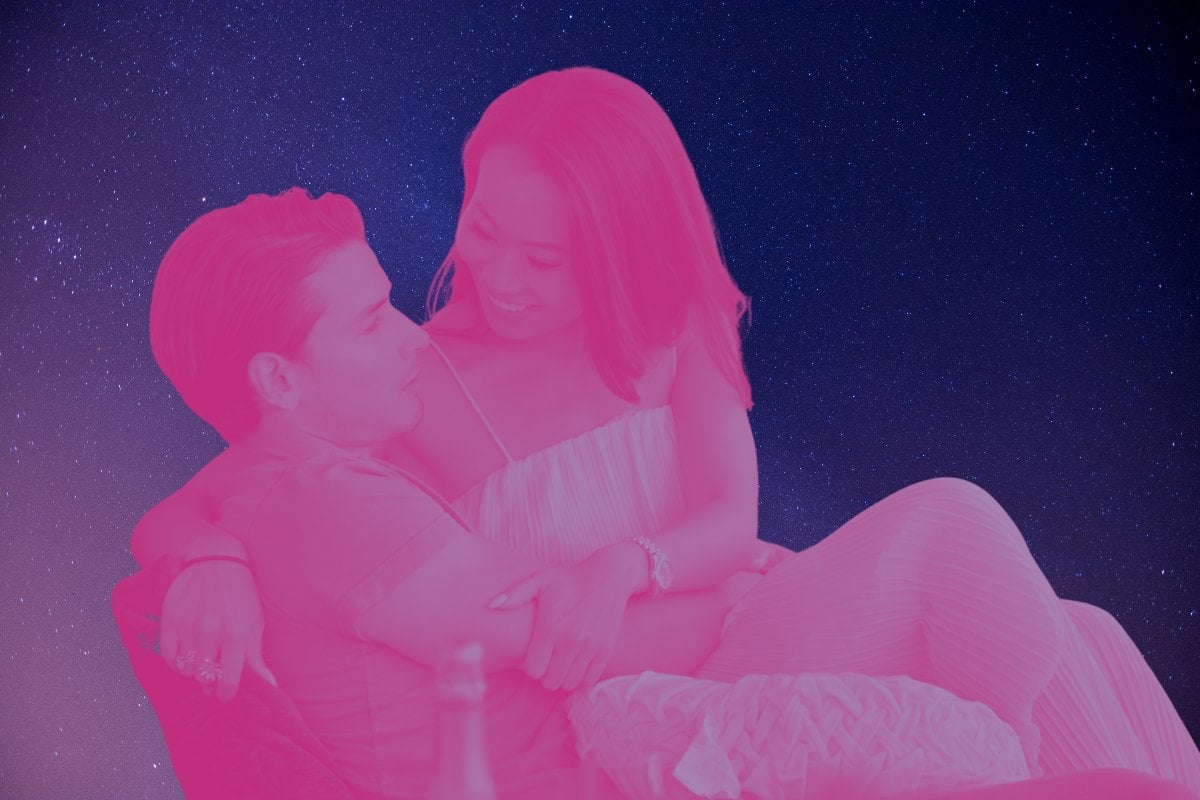 There's lots of things up for debate in season one of Netflix's new reality TV show, Bling Empire.

Like is it ever okay to snoop around someone's house and throw a penis pump out their window in front of their guests? And is it okay to accept thousands of dollars worth of designer clothes from your rich friend whose only job seems to be... spending money?

One thing not up for debate though is that fact that Kelly Mi Li and Andrew Gray's relationship is absolutely toxic and she should run away from him as fast as she can.

Throughout the first season, Kelly and Andrew had one of those on again/off again relationships which has fans reaching for their phones and asking: Are Bling Empire's Kelly and Andrew still together?

So let's break it down.

Who are Kelly Mi Li and Andrew Gray?

Kelly Mi Li is a production company executive who actually appears to... work.

During the first episode, Kelly explains that she married a wealthy man from China in her 20s. He was later indicted in a multimillion dollar fraud scheme. Kelly's ex-husband is now behind bars and she supports herself.

Andrew Gray is Kelly's boyfriend, and he's also an actor. The 33-year-old might look familiar to you, as he starred in Nickelodeon's Power Rangers Megaforce as the Red Power Ranger.

What happened between Kelly and Andrew on season one of Bling Empire?

In episode one, Kelly's friend Anna Shay invites Kelly and Andrew on a last-minute trip to Paris (like you do) to celebrate Kelly's birthday.

Things go smoothly until Andrew wakes up and realises that Kelly has nicely left him in the hotel room to sleep off the jet lag, while she goes on an early morning shopping trip with Anna. Because money. And also, heaps of designer sh*t.

Annoyed by this kind gesture, Andrew calls Kelly who puts him on speakerphone. During the phone call, Andrew becomes very irate and yells at Kelly for not telling him she was going out.

"What the f*ck is going on? Your lack of effort drives me f*cking crazy," he can be heard saying on the phone.

"I haven't figured out the exact best strategy to deal with Drew when he gets in these bad moods or episodes," Kelly later says to the camera. "Unfortunately this is not the first time Drew's yelled at me or spoken to me this way."

Later, Andrew tearfully apologises and the couple decide to go to therapy together. As a result of the therapy, they decide to take a break and live separately for a while. During their time apart, Kelly even goes on a date with her fellow co-star, Kevin Kreider, who has a massive crush on her.

But then Kelly invites Andrew to a park to see their dog and they decide they want to try to be friends. Then they start kissing.

Kelly kind of starts seeing Andrew again but doesn't tell the rest of the cast until the final episode.

Right at the end of the season, we see a glimpse of Kelly turning up at Andrew's doorstep in a long black and white dress, which doesn't... bode well.

So are Kelly and Andrew together now?

During a recent interview with Distractify, Kelly would not confirm whether she's still with Andrew but she did hint that their story is not quite over.

"There's definitely a lot of cliffhangers [in the finale]... I guess we have to find out if me and Andrew make it or not," she said.

Both Kelly and Andrew haven't posted any photos of them together on social media since they both attended Christine Chiu's Chinese New Year party in 2019. However, Andrew did post a photo of himself with their dog in September 2020, with the caption: "one hug/smooch is never enough".

Neither of them seem to have moved on with anyone else since filming wrapped up.

But perhaps the biggest clue that they're still seeing each other is the fact Andrew has a new clothing line out that is distributed by Greyscale Lab - a company Kelly is a partner in.

If Kelly was really trying to cut ties with Andrew, she probably wouldn't be doing business with him.

So, really, we need to wait for one of them to confirm or for season two to know for sure if they're still together.

For now, we'll be watching their social media accounts like hawks.

You can watch season one of Bling Empire on Netflix now.