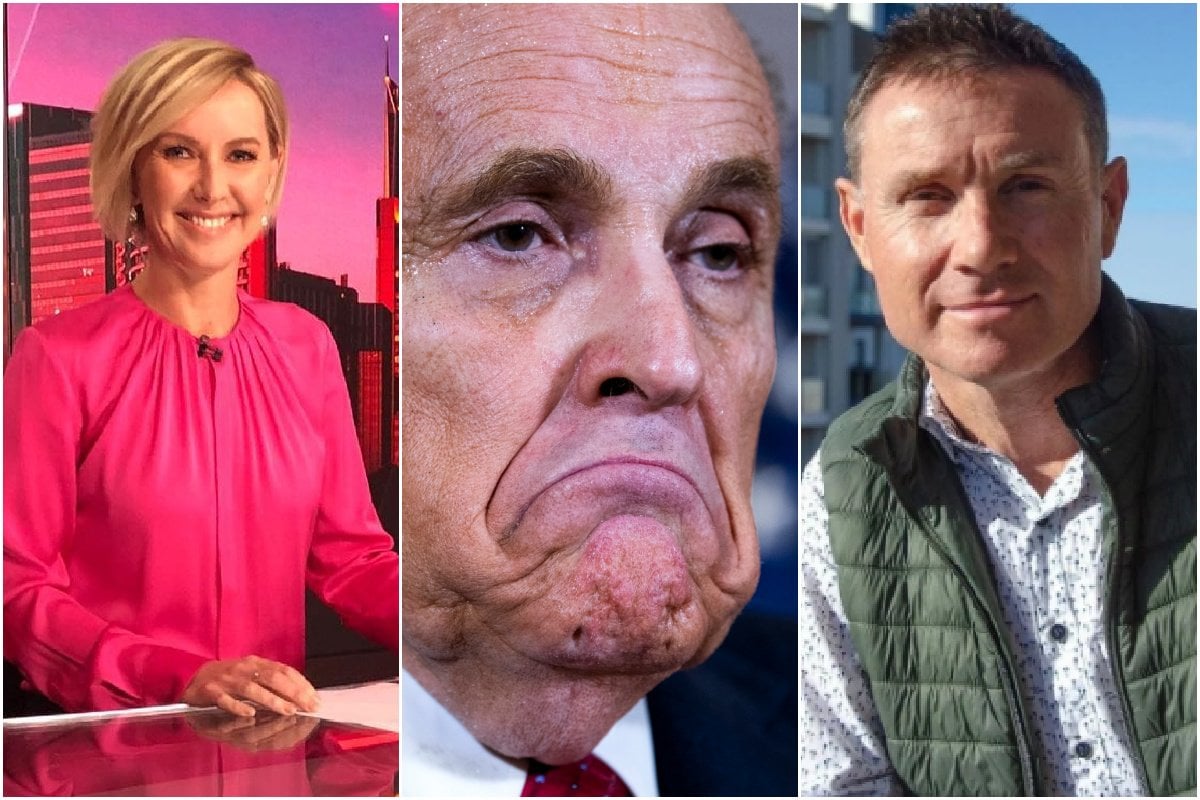 Andrew Laming says he's been diagnosed with attention deficit hyperactivity disorder after the prime minister forced him to apologise for harassing women online and made him undertake empathy training.

The federal MP says he had "no idea" ADHD could be an adult condition even though he is a trained medical doctor and there is a history of the condition in his family.

Dr Laming is about to return to work after being ordered to take a month of medical leave to seek help, including training to improve his ability to understand and be aware of his own actions.

He said his diagnosis was "not an excuse" but it helped explain some of his behaviour.

Two weeks ago, the Liberal National Party took formal action to make sure the veteran MP could not recontest his Brisbane-based seat.

That followed a horror month that saw Dr Laming forced to apologise in parliament after two female constituents accused him of abusing them online. One said the abuse left her suicidal. He was also accused of taking a photograph of a woman bending over in her workplace without her consent, while her underwear was visible.

Labor's Penny Wong said she did not see the ADHD diagnosis as any sort of justification for the MPs conduct.

"I ... haven't seen people use the diagnosis as a justification or rationalisation of these sorts of behaviours - of what appeared to be a persistent pattern of harassment that has been described," she told the ABC.

"ADHD is … not a cause for remorselessness or other antisocial behaviour such as harassment," Founder of Doctors Against Violence Against Women, Dr Karen Williams told The Guardian.

Deaths of two people recently vaccinated in NSW are being investigated.

Two men have died in New South Wales within days of receiving the coronavirus vaccine, with the Therapeutic Goods Administration expected to investigate.

A family member told the Leader, staff at the hospital said the man had suffered a massive blood clot in his lungs.

There has been no confirmed link between the vaccine and his death but health authorities are racing to determine how he died.

The deaths of two people in NSW are being investigated to determine whether there is a clear link to the COVID vaccine, which they received days prior. #9Today

The 71-year-old reportedly had multiple underlying health conditions at the time of his death. Officials stress there is no conclusive evidence that the vaccine is linked to his death at this stage. But NSW Health has convened a panel of experts to examine any potential links.

On April 23 the TGA reported it had reviewed three suspected cases of rare blood clots linked to the AstraZeneca vaccine; a 35-year-old NSW woman, 49-year-old QLD man and an 80-year-old Victorian man.

It concluded "all three of the cases were likely linked to vaccination."

So far six cases of the rare blood clotting disorder have been identified in Australia.

China has called certain Australian politicians troublemakers and urged them to "shake off the Cold War mentality" amid fierce tensions between the two nations.

The retort follows comments from Home Affairs Secretary Mike Pezzullo who declared the world's "drums of war" were beating and that Australia must prepare for conflict in the region.

Chinese Foreign Ministry spokesman Zhao Lijian was asked about Mr Pezzullo's remarks in a press conference on Wednesday and gave a pointed response.

"Some individual politicians in Australia, out of their selfish interests, are keen to make statements that incite confrontation and hype up threat of war, which is extremely irresponsible," he said.

"These people are the real troublemakers."

"As a country that has long benefited from cooperation with China, Australia is being untruthful and immoral with its false allegation of a 'China threat theory'. This will only end up hurting its own interests," he said.

"We urge certain individuals in Australia to shake off the Cold War mentality, stop making irresponsible remarks, and act in ways that are conducive to regional peace and stability rather than the opposite."

The tiny increase in the dole payment has done little to help people into the home rental market, where affordability is becoming worse as the housing market, and the economy more broadly, rebounds from recession.

"The 'new' rate of JobSeeker is so low that it hasn't made a dent in affordability," Anglicare Australia executive director Kasy Chambers said.

The Snapshot surveyed more than 74,000 rental listings across Australia and found:

3 rentals, including share houses, were affordable for a person on JobSeeker.

"There are even fewer affordable rentals now than there were on the old rate of Newstart."

The April 1 hike of $50 per fortnight in the JobSeeker base rate, formerly known as Newstart, was the first increase in more than a quarter of a century, outside of index-linked increases.

Anglicare's latest snapshot of the rental market found that out of 74,000 listings, there were just three affordable rentals for a person on JobSeeker, all shared houses.

There were no affordable properties to rent for anyone on youth allowance.

"It's not the best news." Deborah Knight diagnosed with skin cancer.

TV and radio's Deborah Knight has been told she has to go under the knife to remove a small basal cell carcinoma.

Speaking on 2GB Afternoons, Knight informed her listeners that her dermatologist delivered "not the best news" after receiving her biopsy results for a bump on her nose.

"So, it's a small cancer and it's nodular which means I've got to get it cut out. I've got to go under the knife," she said.

While there are non invasive treatments for skin cancer, Knight says that wasn't an option for her.

"I've got to actually get it cut out," she said.

"I know we're always being reminded to get our skin checked regularly and to wear sunscreen to cover up when we're in the sun, but is so important and I just want to be a living reminder to that."

Seven new COVID-19 cases reported in Queensland have come from a gas tanker off the Sunshine Coast.

The state recorded nine cases overnight, with the other two detected in hotel quarantine.

It's possible more cases will come from the British-flagged Inge Kosan in coming days, and Deputy Premier Steven Miles said the government was deciding whether patients would be treated on board or taken ashore.

A major medical mission is underway tonight after a ship carrying COVID pulled-up off the Sunshine Coast. Health and Maritime authorities will treat the crew off-shore, with the only crew member not infectious now in hotel quarantine. | @Chris_Campey pic.twitter.com/cWl75cGSzG

"Queensland Health is very good at this, they work with Maritime Safety Queensland and with the ship to ensure testing occurs, to ensure that health services are provided, and they'll be making decisions about where best to provide those health services," Mr Miles said on Wednesday.

Consideration is being given as to whether infected patients can be quarantined on the vessel to reduce risk to the rest of the crew.

Stolen Generation survivors in the Northern Territory are suing the federal government for their forcible removal from family over more than 60 years.

Shine Lawyers on Wednesday said in a statement it would take on the case, with up to 6,000 Indigenous Australians eligible to join the class action filed in the NSW Supreme Court.

Lawyers estimate up to 6000 Indigenous people in the NT are eligible to join the class action against the federal government. https://t.co/szs3dZQpR1

Special counsel Tristan Gaven, who will legally represent the group, said most states had taken steps to compensate Stolen Generation survivors but no such action had occurred in NT.

Compensation will be sought for the forced removal of Indigenous Australians from their families between 1910 and the 1970s.

"It's impossible to improve the future without acknowledging the past," Mr Gaven said.

India has crossed a grim milestone of 200,000 people lost to the coronavirus as a devastating surge of new infections tears through dense cities and rural areas alike, overwhelming healthcare systems on the brink of collapse.

The health ministry on Wednesday reported a single-day record 3293 COVID-19 deaths in the last 24 hours, bringing India's total fatalities to 201,187 as the world's second most populous country endures its darkest chapter of the pandemic yet.

The country also reported 362,757 new infections, a new global record, which raised the overall total past 17.9 million. The previous high of 350,000 on Monday had capped a five-day streak of recording the largest single-day increases in any country throughout the pandemic.

India, a country of nearly 1.4 billion people, is the fourth to cross 200,000 deaths behind the United States, Brazil and Mexico. And as in many nations, experts believe the coronavirus infections and fatalities in India are severe under counts.

Hospitalisations and deaths have reached record highs, overwhelming health care workers. Patients are suffocating because hospitals' oxygen supplies have run out. Desperate family members are sending SOS messages on social media, hoping someone would help them find oxygen cylinders, empty hospital beds and critical drugs for their loved ones. Crematoriums have spilled over into parking lots, lighting up night skies in some cities.

Read: ‘I am one of the 9,000 Australians stuck in India. This is what life is like right now.’

The former New York City mayor has been under investigation for several years over his business dealings in Ukraine.

Breaking NYT: FBI agents have also executed a search warrant at the DC-area home of Victoria Toensing, a lawyer close to Rudy Giuliani who had dealings with Ukrainians involved in the effort to find damaging information about the Bidens. https://t.co/M55weRwDjH

Details of the search are unclear, but electronic devices were seized at Giuliani's property on Wednesday morning.

"Why would you do this to anyone, let alone someone who was the associate attorney general, United States attorney, the mayor of New York City and the personal lawyer to the 45th President of the United States," his lawyer Robert Costello, told the New York Times.

- Tokyo will decide in June whether to allow domestic spectators at the upcoming Olympics, with the President assuring "we are prepared to hold the Games without spectators."

- A formal investigation has been opened into the financing of renovations to Prime Minister Boris Johnson's apartment by Britain's electoral commission.

- Apollo 11 astronaut Michael Collins, who piloted the ship from which Neil Armstrong and Buzz Aldrin left to make their historic first steps on the moon in 1969, has died of cancer at the age of 90.

- Glaciers around the world are melting faster, losing 31 per cent more snow and ice per year than they did 15 years earlier, according to a new study in the science journal Nature.

Reply
Upvote
To be fair to Rudy, I’m not sure he’s mentally competent to stand trial. It would be great if we could keep him away from other people though.
But I will always have a soft spot for him after he brought us the Four Seasons Landscaping press conference, the single bright moment in 2020.
G
gu3st a year ago