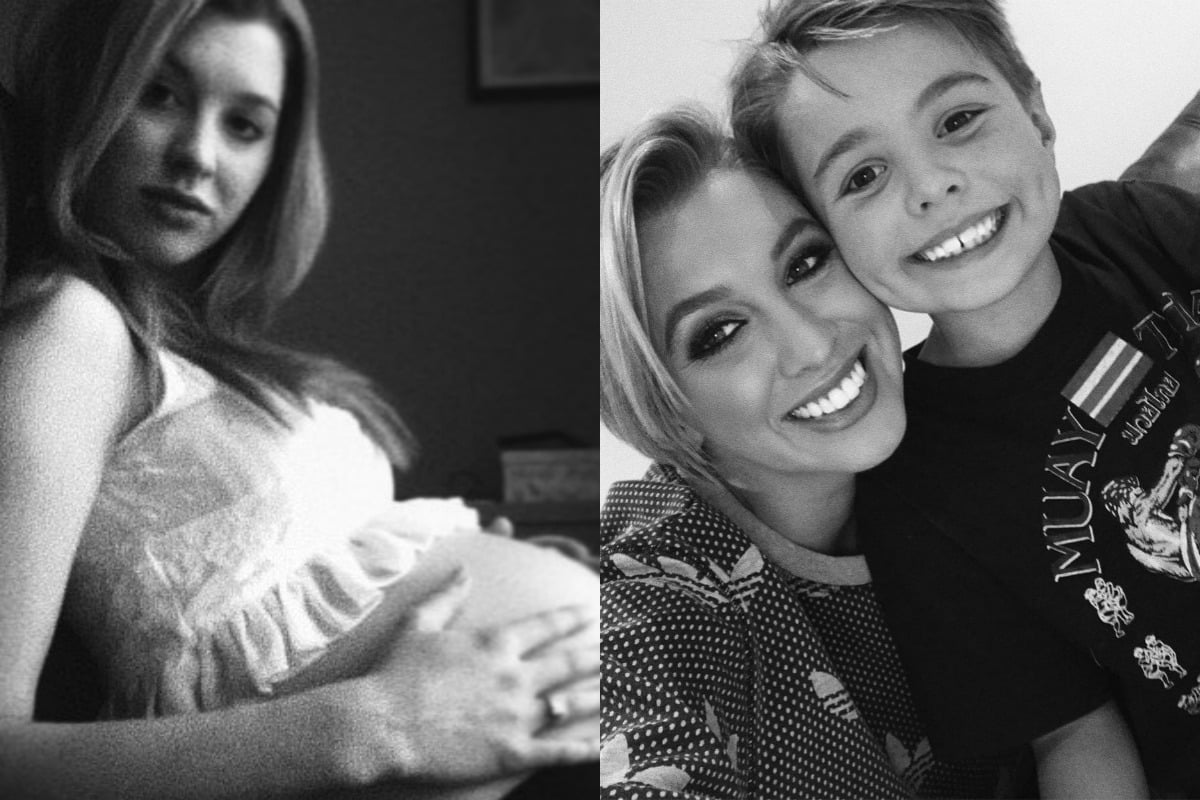 Since Alex Nation first appeared on our TV screens back in 2016 on The Bachelor, she's shared many aspects of her life with the public.

She has opened up about becoming pregnant at a young age, what her life is like now like with her nine-year-old son, and her sexuality. But for the first time, Alex sat down with fellow ex-Bachelor contestant Laura Byrne on Mamamia's Me After You podcast, to discuss how she became pregnant with her son Elijah.

Watch the trailer for Mamamia's newest podcast, Me After You. Post continues below.

"So Elijah was a one night stand baby," Alex said.

"He was actually my boss at work. We had an office fling and it was just one night [after a work party]. One night of flirting, passion and excitement. Six weeks later, I found out I was pregnant.

"We weren't dating or anything. So we had to get to know each other and learn to love each other over the course of the next nine months for Elijah. It was a completely different ball game. The biggest whoopsie, but the best whoopsie."

Alex knew at 19 years old that if she became pregnant, there was no option besides having the baby. So whether Joel [Elijah's father] was interested in raising a child or not, she was becoming a mother.

"I remember finding out I was pregnant and knowing the only option was having a baby. I didn't think of the alternative. I remember being so petrified telling Joel that I was pregnant because it was going to impact his life as well; but I had already made my decision," Alex said.

Nineteen. A baby face with a baby bump. Having a baby scares me more now than it did then. Perhaps because I’ve grown so much and I’ve learnt a lot and I know now what it means to bring a child into this world. This picture popped up in my Facebook memories, 8 years ago today. Thankful and proud of naive, bold, baby faced me, but jeeeeee wiz was my Mum pissed 😂💗

"I knew that he could very well turn around and say, 'That's not for me,' and I was quite willing carry that and be okay with that," she continued.

"I remember asking him to come to my apartment and I was bawling my eyes out and saying, 'I'm so sorry, I'm pregnant. I know that this isn't your decision and we don't even know each other, so however much you want to have to do with your child is entirely up to you.' And I remember him looking at me and saying, 'So we're having a baby,'" she recalled.

Alex told Laura that at the time, Joel was 23 and quite young to become a father. But that didn't matter.

When I went away to Europe recently, a friend of mine had both of his parents there who had been separated for years. Their relationship inspired me and got me thinking of how much I would love the very same thing for Elijah. Here we are ❤️ Beyond proud of this, where we are and where we are going as parents.

Before and after becoming a mother, Alex had a few tumultuous periods. The first, in her teenage years. And the second, after her and Joel split up.

"After I separated from Joel, it was almost like unleashing this wild beast. I kind of felt like I was finding myself as a woman again.

"I was probably the most selfish I've ever been," she said. "I hate to say it but I put Elijah on the back burner for maybe a year and I feel guilty about that. But I'm also not ashamed to say that because I am human."

"I put myself first and him second from the ages of two to three. I just wanted to go out, meet people and do what I missed out on.

"I kind of just went on this tumultuous exploration of trying to find my youthful self again; and try and not feel like a mum who's tired and exhausted. So for the first first year or 18 months [after the split], it was hard but also fun."

Alex continued to explain that despite having fun post-breakup, she was scared that she would never find love as a young, single mum.

"It was the fear of: Am I damaged goods? Will someone want me again? Do I have too much baggage? I was scared that someone wouldn't love me again," she said.

But Alex did find love - with a woman named Megan. Someone she eventually had to discuss with Elijah.

"So it was really funny. Megan and I played on the same football team, so Elijah knew Megan," Alex told Laura.

"I remember sitting Elijah down and explaining to him, 'You know how Mummy loves Daddy? And how Mummy and Daddy were together once upon a time? Well, you know I really love Megan and I have feelings for Megan. Do you know what that means?'

"It was just so beautiful because he didn't care," she said.

I love experiencing life with you 🌿